Welcome To The Cruel World Ben Harper & The Innocent Criminals 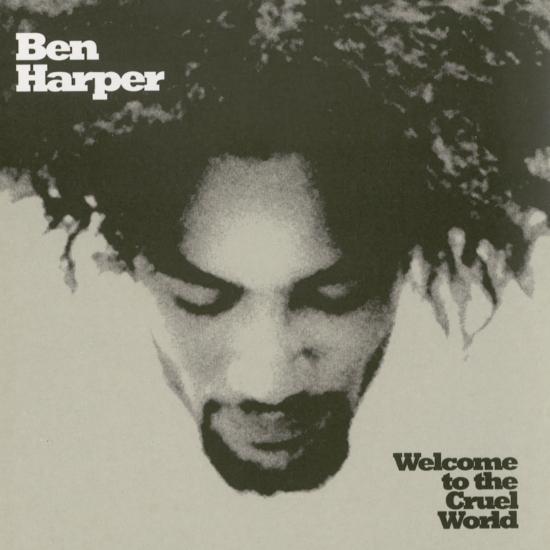 Info for Welcome To The Cruel World

The aggressive, powerhouse sound singer/songwriter Ben Harper would introduce with his band the Innocent Criminals on 1998's „The Will To Live“ is not present on the artist's debut, „Welcome To The Cruel World“. Instead, this '94 album shines a spotlight on Harper's acoustic guitar, plaintive voice, and soulful folk songs. Harper's intensity as a performer is clear from the opening guitar instrumental 'The Three of Us' (which commands attention with its subtle, simple repetitions) to 'I'll Rise,' a gospel-inflected interpretation of Maya Angelou's poem 'And Still I Rise.'
Sonically, the record is of a piece, with understated dynamics and an emphasis on intimate, acoustic, bluesy folk-rock. But Harper impresses most with his penchant for incorporating a range of stylistic influences, such as the late-'60s reggae cast of 'Breakin' Down' and the Cajun-country romp of 'Mama's Got a Girlfriend Now.' Moreover, Harper strikes an admirable balance between songs that address issues of social injustice ('Like a King') and those that touch on personal concerns of love and identity ('Pleasure and Pain'). This combination, on top of Harper's obvious musical talents, makes for an impressive, thoroughly enjoyable first effort.
„The full range of Ben Harper's influences would not come to bear until later albums, but his debut, Welcome to the Cruel World, lays a strong foundation. 'Like a King' and 'Take That Attitude to Your Grave' burn with a political conviction rarely heard during the 1990s. 'Forever' has a tenderness which demonstrates Harper's emotional range. Lackluster hippie jams that cultivated his early following may have served a purpose but feel fluffy by comparison when compared to the meatier tracks. Ben closes the album with a song that frequently closes his concerts, 'I'll Rise.' This song, built around Maya Angelou's 1979 poem 'And Still I Rise,' reminds one of art's ability to pierce through society, self, and the soul.“ (Ryan Randall Goble, AMG)
Ben Harper, vocals, multiple instruments
Richard Cook, Uillean pipes
John McKnight, bass, accordion
Rock Deadrick, percussion, drums, background vocals
Tommy D. Daugherty, drum programming
Clyde Allen, background vocals
Clarence Butler, background vocals
Clabe Hangan, background vocals
Jelani Jones, background vocals
Ken McDaniel, background vocals
John Taylor, background vocals
Kevin Williams, background vocals
Suzie Katayama, cello
Recorded 1994 at The Convent, London
Engineered by Mikal Reid
Produced by Ben Harper, J.P. Plunier
Digitally remastered

By My Side (Retrospective) Remastered

Call It What It Is

Ben Harper and The Innocent Criminals

Fight For Your Mind (Remaster)

Welcome To The Cruel World

The Will To Live (Remaster)

Diamonds On The Inside (Remaster) 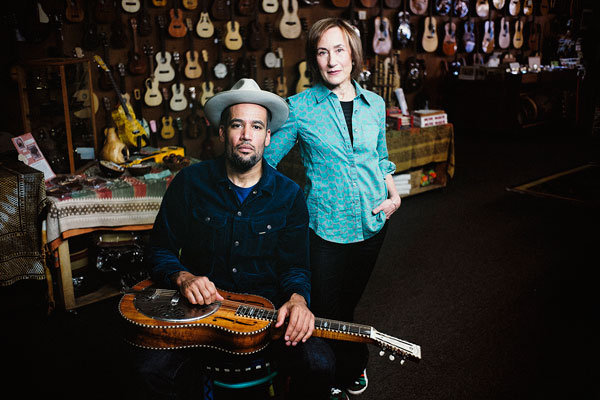 Ben Harper
Combining funky, groove-laden soul with handcrafted acoustic folk-rock, Ben Harper enjoyed cult status during the course of the '90s before gaining wider attention toward the decade's end. As a young artist, he drew his influences from classic singer/songwriters, blues revivalists, guitar slingers, and jam bands like Blues Traveler and Phish, which meant he was embraced by critics and college kids alike. Despite finding commercial success with the radio single "Steal My Kisses" in 2000, Harper continued to explore different (and often challenging) musical textures during the 21st century, enjoying a solid fan base at home and a considerable amount of fame in Europe, where was named 2003's Artist of the Year by the French branch of Rolling Stone.
A native of California, Harper grew up listening to blues, folk, soul, R&B, and reggae. He started playing guitar as a child and began to perform regularly as a preteen. During his adolescence, he focused heavily on the acoustic slide guitar, which eventually became his signature instrument. Harper scored a deal with Virgin Records in 1992 after maintaining steady schedule of shows in the L.A. area; two years later, he released his debut album, Welcome to the Cruel World, to positive reviews.
Released in 1995, the politically heavy Fight for Your Mind made for a strong sophomore effort, an obvious growth in musical experimentation and individual declamation. It was also the songwriter's first record to later reach gold status. Harper's third album, 1997's The Will to Live, pushed his blues-oriented alternative folk into the middle mainstream, becoming a mainstay at college radio and making inroads at adult alternative radio. Recorded over two years of touring in support of Fight for Your Mind, The Will to Live also introduced the Innocent Criminals, Harper's longstanding backup band. The Innocent Criminals — bassist Juan Nelson, drummer Dean Butterworth, and percussionist David Leach — helped solidify Harper's musical rhythms and emotional diversity over the years to come.
Harper's career gained momentum during 1998 and 1999. One of his most successful albums to date, 1999's Burn to Shine, blended his fondness of '20s jazz compositions with urban beatboxing, resulting in a clever and passionate collection of songs. "Steal My Kisses" and "Suzie Blue" were radio favorites, landing him two headlining world tours and an opening spot on the Dave Matthews Band's annual summer trek in 2000. The following spring, Harper issued Live from Mars, a double disc of live electric and acoustic material spanning the previous year's tour and including covers of material by Led Zeppelin, the Verve, and Marvin Gaye.
Harper dove into worldbeat on his fifth studio effort, Diamonds on the Inside, which appeared in March 2003. He toured through Europe the following year with the Blind Boys of Alabama, and the two acts entered Capitol Records' basement studios after the tour's commencement to lay down ten tracks together. The resulting collaborative album (issued under the names of both Harper and the Blind Boys of Alabama), There Will Be a Light, was released in September 2004, followed by the concert CD/DVD package Live at the Apollo in 2005.
Eager to release more material, Harper reconvened with the Innocent Criminals and issued the double album Both Sides of the Gun in March 2006. The album reached number seven on the Billboard album charts and rose to number one in Australia. While touring in support of the record, Harper and company began playing a new slew of songs during their evening soundchecks, eventually decamping to Paris and recording the new material within one week. This resulted in two records — Lifeline and Live at Twist and Shout Records — both of which were issued in 2007. For his 2009 album White Lies for Dark Times, Harper recorded with the band Relentless7, the members of whom had previously worked with Harper on the track "Serve Your Soul" from Both Sides of the Gun. Harper and the Relentless7 recorded Live from the Montreal International Jazz Festival in July 2009 and released the album early the following year. Afterwards, Harper began working on his first solo album in years, using Jackson Browne's basement as a recording studio and collaborating with Ringo Starr on two tracks. The album's first single, "Rock n' Roll Is Free," was released during the early spring of 2011, followed two months later by the full-length Give Till It's Gone and in 2012 by the career retrospective By My Side. Harper moved over to Stax and teamed with blues legend Charlie Musselwhite for 2013's collaboratively released Get Up!