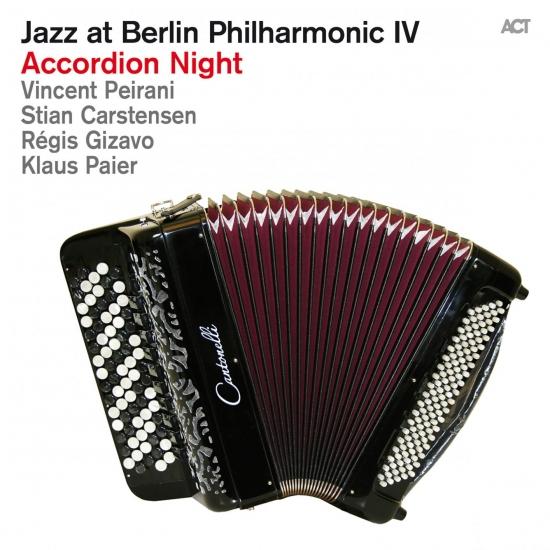 The programme is the star at “Jazz at Berlin Philharmonic”. The aim of the concert series, curated and produced by Siggi Loch, is to bring together different musicians in a way that has never been seen or heard before, with one thematic focus. On 13 February 2015, the eighth edition at the sold out Kammermusiksaal saw the spotlight focus on the accordion: From Musette in Paris to Schrammelmusik in Vienna, the Sinti and Roma music from the Balkans and the tango in Buenos Aires, the accordion is best loved in popular music, and a welcome companion in house and folk music: the 'common man's orchestra'. In the classical and jazz genres, however, it is all too often misunderstood and still an outsider in classical and jazz music, despite pioneering talents such as Astor Piazzolla and Richard Galliano.
Vincent Peirani, one of the stars of the evening who “expertly modernises” the instrument (3sat Kulturzeit), initially underestimated the scope of sounds and opportunities for musical development that the accordion offers: “As a boy I always wanted to learn the drums. The accordion was an instrument for grandparents, but my father made me learn it [...]. Not until I had learned to play Mendelssohn and Bach on it did I realise how versatile an instrument it is, and then I adopted it - or it me ...”
The classically trained accordionist Klaus Paier is an adventurous sonic explorer, who creates an intoxicating mix of jazz, classical, Musette and world music, alongside cellist Asja Valcic – in a nutshell: “Eurojazz at its best” (Der Spiegel).
Connecting the unexpected: Surprising, unusual artistic encounters can produce magical moments, and for this evening, Siggi Loch initiated two duos that had never played together before. Firstly, Régis Gizavo, an autodidact accordionist who learned his trade on the streets and in the bars of Madagascar, From his local folk music to Portuguese and South African styles, mostly heard on the radio channels he could receive from neighbouring Mozambique, Gizavo snapped up everything he could get his ears on. At “Jazz at Berlin Philharmonic”. He teams up with guitarist Nguyên Lê, a musician renowned for his fusion of world music and jazz. Secondly, Stian Carstensen, well known for his pioneering multi-style band “Farmers Market”, joins forces with the Polish violin wizard Adam Bałdych.
Vincent Peirani was voted “The Discovery of the Year 2014” in France (Victoire du Jazz), is considered by Fono Forum as a “one in a century talent”, and the FAZ newspaper recently wrote that “Peirani can do almost anything on an accordion”. Alongside the saxophonist Emile Parisien he forms a dream team that was awarded the ECHO Jazz 2015 as best international ensemble performance (2014’s “Belle Époque”).
Astor Piazzolla's “Libertango” tops off the “Accordion Night”. Interpreted by all of the artists together, this is a rendition of the eternal classic that has definitely never been heard in this way before. And so it is that another memorable and celebrated “Jazz at Berlin Philharmonic” is brought to a magnificent conclusion.
Klaus Paier, accordion
Asja Valcic, cello
Régis Gizavo, accordion & vocals
Nguyên Lê, guitar
Stian Carstensen, accordion
Adam Bałdych, violin
Vincent Peirani, accordion
Emile Parisien, soprano saxophone
Recorded live in concert at the Berlin Philharmonie (KMS), February 13, 2015
Recorded, mixed and mastered by Klaus Scheuermann
Produced by Siggi Loch