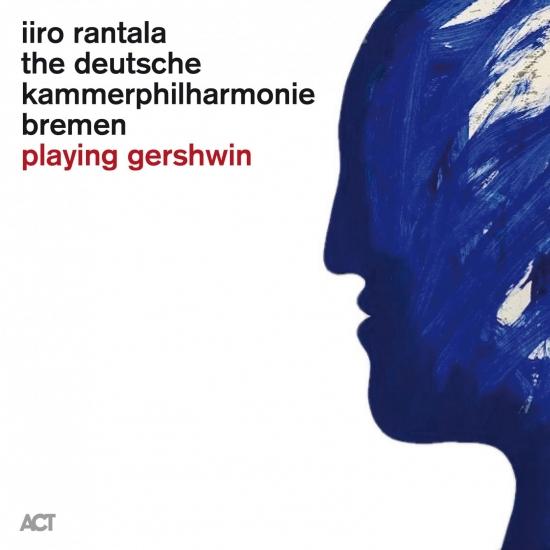 Only very few musicians are as well versed in both, classical music and jazz as the Finnish pianist Iiro Rantala. With the acclaimed 'Deutsche Kammerphilharmonie Bremen', he now continues his classical journey. Following the album "Mozart, Bernstein, Lennon" which got nominated for the "International Classical Music Award", the new recording features repertoire by George Gershwin - for Rantala, with his strong melodies and great emotional warmth, a classical soulmate.
The time of rigid demarcations between musical genres is over. For those who see music, indeed who love music as a universal language offering unlimited scope for human expression, this can only be a positive development. When one considers the jazz pianists of our time, they have just about all received their grounding in classical music, and yet these are musicians who don’t just traverse many different jazz styles, they can also roam at will into other genres. And looking among them, it would be hard to find a pianist as quintessentially complete as Iiro Rantala from Finland.
The 49-year-old, who first studied jazz piano at Finland`s reknown Sibelius Academy in Helsinki, and then classical piano at the Manhattan School of Music in New York, has always shown a tendency to regard the entire history of music as a treasure trove which can supply material for his own very personal creations. Right from his first solo album "Lost Heroes" he was paying tribute not only to jazz legends but also to opera singer Luciano Pavarotti. His album "My History Of Jazz", released shortly thereafter in 2012, begins with Johann Sebastian Bach, and with every justification. One aspect of Rantala's activity which has been consistent, alongside his succession of wide-ranging and surprising projects – such as his John Lennon homage, or his cycle of the seasons, "My Finnish Calendar", or his first opera "Sanatorio Express" premiered in 2018 – is his regular work with classical orchestras. Since 2017, Rantala has had a particularly fruitful cooperation with The Deutsche Kammerphilharmonie Bremen, one of the world's leading chamber orchestras, a group which inspires audiences all over the world with its unique way of making music. The award-winning ensemble's preference for crossover projects is also one of its distinguishing traits, which means that Rantala and Deutsche Kammerphilharmonie Bremen are definitely on the same musical wavelength.
Their first performance together was at the Gala Concert for Jazzahead in Bremen. "From the very first note, I fell in love with their sound, their energy and their musicality," says Rantala. They played Mozart’s C major Piano Concerto K. 467. The audience of industry specialists from all over the world loved it, and the result was the album "Mozart, Bernstein, Lennon", which was promptly nominated for an International Classical Music Award. This successful collaboration has led to a further album which is now available, "Playing Gershwin". It is a logical continuation, since with George Gershwin it takes us to the composer whose work represents a confluence of modern classical music and jazz. And at the same time it leads us into the period of the 1920s and 1930s, when, in Gerswin’s hands at least, genre boundaries were as fluid as they are today. Further proof of this fluidity between genres is that the audience for the the world premiere of "Rhapsody in Blue"in 1924 by Gershwin and the Paul Whiteman Band at New York's Aeolian Hall included violin virtuosi Heifetz and Kreisler, classical composers Rachmaninov and Stravinsky, and the conductor Leopold Stokowski.
The album begins with "Rhapsody in Blue". This is a performance with a particular freshness about it, not least because Rantala takes the fully through-composed piece and allows himself a few freedoms with it. For example, he inserts an improvisation based on a Cuban montuno into the final cadenza. Equally thrilling are the 16 minutes in which Rantala and The Deutsche Kammerphilharmonie Bremen conducted by Jonathan Bloxham take us through the story of Gerswin's "Porgy and Bess" – with Heifetz's five-part suite for piano and violin derived from the opera as their point of departure. The fascinating interplay of keyboard and stringed instrument has also shaped Oliver Groenewald's orchestral arrangement in which we hear Gershwin’s fabulous tunes, from "Summertime" to "It Ain't Necessarily So".
And there’s more. Strictly speaking, the album should be called "Playing Gershwin and Rantala", because there are also five shorter pieces by the Finnish pianist himself. These are tunes from earlier albums by the pianist, in which he references classical musicians or styles. "What Comes Up, Must Come Down", for example, is a take on Franz Liszt’s romantic piano virtuosity, and this orchestral version brings glorious technicolor to it. "Anyone With A Heart" is Rantala’s personal bow to Mozart. "Hard Score" is like a movie theme, drawing inspiration from Arabic and world music. And, of course, the tango - which is also heard in the previous pieces – is unavoidable. In his youth in Tango-mad Finland, Rantala was more or less inhaling it every day, and playing it on countless gigs: "A Concert Tango" is not so reminiscent of Argentinian tango, but rather the more robust classical tango that is incredibly popular in Finland.
As it does in the Gershwin works, the complex interplay which Rantala sets up with the orchestra also works very well here. "I think like a classical musician. I want to play good pieces, good tunes. Not just riffs," he says. Of course, he always does this in the jazz spirit, in the spirit of musical freedom. Which, as ever, is what makes Iiro Rantala such a “natural phenomenon at the piano” (Jazzthing).
Iiro Rantala, piano
The Deutsche Kammerphilharmonie Bremen
Jonathan Bloxham, conductor
Antti Tikkanen, solo violin & concert master
Recorded by Adrian von Ripka at Die Kammer-Philharmonie, Bremen, 2-6 January 2019
Mixed and mastered by Adrian von Ripka
Executive Producer: The Deutsche Kammerphilharmonie Bremen 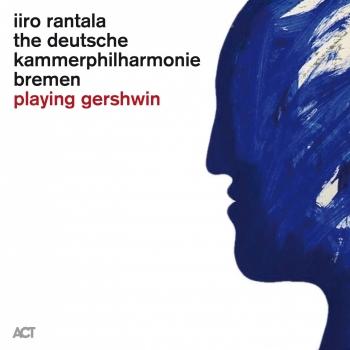 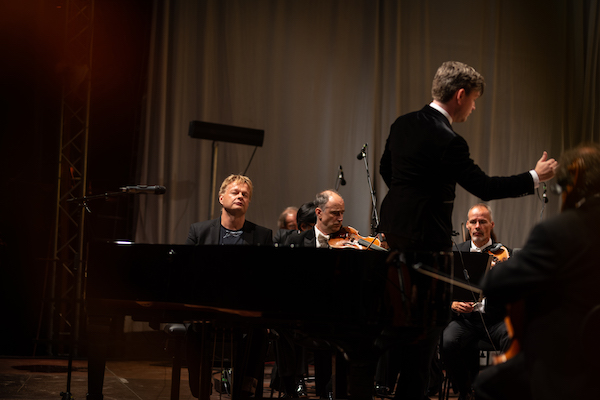 Iiro Rantala
(b. 1970) started his piano and music studies at the Music School of Käpylä and in the Cantores Minores Choir at the age of 7. In 1983 Rantala was accepted to the Pop & Jazz Conservatory of Oulunkylä where he studied under Seppo Kantonen and composed his first songs for Ikivirheät-group where played also drummer Sami Kuoppamäki and saxophonist Manuel Dunkel. Rantala was also a member of Upi Sorvali's (1952-1989) Big Bad Family before the death of the drummer-leader.
In 1988 Rantala started his studies at the jazz department of the Sibelius Academy and already the same year he formed Trio Töykät with Eerik Siikasaari and Rami Eskelinen. Trio developed an original concept where Rantala's compositions were backed up with the skills and arrangements of the trio and the repertoire included more humor than Finnish jazzbands usually had in their music in the 1980s. Already on the year the group was formed Trio Töykeät won the Hoeilaart European Jazzband Contest in Belgium. The group played their first Finnish Jazz Federation tour in 1989 and the debut album Päivää! (Sonet) was released the next year.
In 1990-1993 Rantala and Eskelinen studied both in New York at the Manhattan School of Music but Rantala was disappointed in the jazz education of the school and took classical piano studies instead. When Rantala and Eskelinen returned to Finland, Trio Töykeät performed actively around the world, for example in Cuba, Mexico, Europe, Australia and Asia. Trio released high-quality albums regularly and Jazzlantis released in 1995 won the Jazz Emma Prize as the Jazz Recording of the Year in 1995. In the same year, and the year after that, first Siikasaari and then Rantala were awarded with the Georgie, Yrjö, Award as the Jazzmusician of the Year. Trio Töykeät was also honoured to be the first jazzband ever to play at the Presidential Independence Day Reception in 1996.
In the beginning of the 21st century Trio Töykeät released several high-quality albums and performed still actively abroad and in Finland. In 2008 Trio Töykeät however announced, after over 2000 gigs, 43 countries and seven albums, that they are breaking up. There was not any drama involved in the decision to quit: the group just felt that it had come to the end of it's journey. All in all Trio Töykeät was one of the most famous Finnish jazzbands in the 1990's, probably even the most popular.
Besides Trio Töykeät, Rantala has been composing music for different occasions. Only as a soloist for an orchestra he has performed several times but he has also composed lots of classical music and music for films, theatre plays and musicals. Rantala has hosted his own tv-shows Iirottelua and Iiro irti! on the channel TV1 and he is the artistic leader and the producer of the Kansi auki! Piano Jazz Festival organized annually in Helsinki in November. The most recent groups for Rantala have been Iiro Rantala New Trio with guitarist Marzi Nyman and beatboxer Felix Zenger that performed in 2006-2010 and My History of Jazz -project that was dedicated for the past idols of Rantala.
The Deutsche Kammerphilharmonie Bremen
is one of the world’s leading orchestras, captivating audiences everywhere with its unique style of music-making. The Estonian conductor Paavo Järvi has been the orchestra’s Artistic Director since 2004. Paavo Järvi and The Deutsche Kammerphilharmonie Bremen have achieved tremendous international success with their Beethoven Project and the Schumann Project, including tours throughout the world, CD and DVD recordings.
Jonathan Bloxham
is established as one of the leading British conductors of his generation. He was Assistant Conductor of the City of Birmingham Symphony Orchestra from 2016-2018 and is Artistic Director of Northern Chords Festival. He conducted a wide range of repertoire with the CBSO ranging from Mozart and Beethoven to Elgar, Tchaikovsky and Debussy. He closed the CBSO season in June 2017 in Symphony Hall with a programme of Smetana, Schumann and Dvorak.
Guest engagements since 2017 have included the Deutsche Kammerphilharmonie Bremen, the Lausanne Chamber Orchestra, RTE Concert Orchestra, Aurora, Malaysian Philharmonic Orchestra, Hong Kong City Chamber Orchestra, the Basque National Orchestra, the BBC Scottish Symphony Orchestra and Sinfonia Cymru (broadcast on BBC Radio 3).
He returned to DKAM Bremen in January 2019 for a recording project and in March for concerts in Bremen and the Elbphilharmonie Hamburg.
In summer 2019 he will work as Assistant Conductor in Glyndebourne on Rusalka and other future engagements include a return to the CBSO, DKAM Bremen, concerts with the China National PO in Beijing, the Shanghai SO and the Guangzhou SO, the Tapiola Sinfonietta, The London Mozart Players, BBC National Orchestra of Wales, Pärnu City Orchestra and the Cambridge University Chamber Orchestra.
Originally an acclaimed cellist, Jonathan is the recipient of several prestigious awards such as the Guilhermina Suggia Gift and Royal College of Music Cello Prize and in 2012 gave his concerto debut at the Berlin Philharmonie. He was a founding member of the Busch Trio until 2015 and performed regularly at the Wigmore Hall, Kings Place and the Southbank Centre and was a frequent guest on BBC Radio 3. Further chamber music collaborations included projects with renowned musicians such as Michael Collins, Jack Liebeck and the Schumann Quartet.
Passionate about contemporary music, Jonathan has commissioned several new works by young composers such as Vlad Maistorovici, Jack Sheen and Freya Waley Cohen. He has conducted the CBSO in a performance of Nitin Sawhney’s Animal Symphony which was broadcast on Sky Arts, and in May 2017 he conducted the premiere of Matthew Kaner’s Stranded for solo violin and chamber orchestra with violinist Benjamin Baker at the Europe Day Concert at St. John’s Smith Square, London.
Jonathan started his musical training at the age of 8 with a local cello teacher at his primary school in Gateshead. He then studied at the Yehudi Menuhin School & Royal College of Music with Thomas Carroll before completing a Master’s Degree at the Guildhall School of Music and Drama with Louise Hopkins. Jonathan has taken further conducting studies with Sian Edwards, Michael Seal, Nicolas Pasquet and Paavo Järvi.