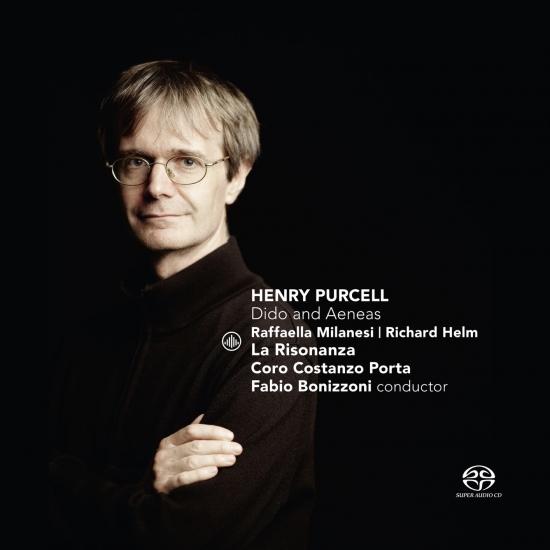 Fabio Bonizzoni, one of the leading Baroque music conductors of our time, and his group La Risonanza make their debut on Challenge Classics with Dido and Aeneas, Purcell’s operatic masterpiece. It is coupled with The Loves of Mars and Venus by John Eccles and Gottfried Finger, Purcell’s near contemporaries.
Henry Purcell’s Dido and Aeneas, composed in the 1680s, is arguably the most beloved and best-known opera in English. Bonizzoni says: “The charm of this opera is in that it contains everything, like Cervantes’ Don Quixote: any life experience is within it. Love, hate, death, dream, despair, the innocent and the wicked play. Purcell’s awareness in portraying such opposite feelings is amazing.” La Risonanza and Fabio Bonizzoni offer a version of Dido and Aeneas that provides a sense of how Purcell’s famous work may first have been heard by London theatre-goers in 1704. Italian soprano Raffaella Milanesi and Austrian baritone Richard Helm take the title roles.
Mars and Venus was composed by Purcell’s near contemporaries, John Eccles and Godfrey Finger, to a text by Peter Anthony Motteux. The songs were published in 1697 and the play text, providing a clear guide to exactly what was performed, in 1696. With these sources, Bonizzoni has reconstructed the Prologue of Mars and Venus by using the published songs, instrumental music by Finger or Eccles from other works, adapting where necessary.
One of the leading Italian harpsichordists and organists of his generation, Fabio Bonizzoni studied with Ton Koopman at the Royal Conservatorium in The Hague. After playing for several years with Amsterdam Baroque, Le Concert des Nations and Europa Galante, since 2004 he has exclusively been a soloist and director, in particular of his own orchestra La Risonanza. He is also harpsichord professor at the Royal Conservatory of The Hague and in Italy at the Conservatory of Novara. With La Risonanza he completed the award-winning recording of all of Handel’s Italian Cantatas with instruments in 2010.
"The real star is the instrumental playing (how the dances swing!); and with less at stake, warmly stylish, The Love of Mars and Venus proves a delightful postscript." (BBC Music Magazine)
Raffaella Milanesi, soprano (Dido, Thalia, Terpsichore)
Richard Helm, baritone (Aeneas)
Stefanie True, soprano (Belinda, Erato)
Iason Marmaras, baritone (Sorceress)
Michela Antenucci, soprano (First Witch, Sailor)
Anna Bessi, mezzo soprano (Second Witch, Spirit)
La Risonanza
Coro Constanzo Porta
Fabio Bonizzoni, conductor