A Bohemian in London Duo Dorado 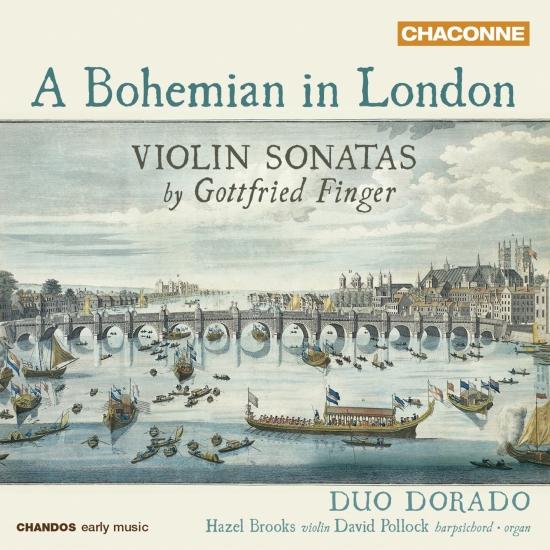 Info for A Bohemian in London

Gottfried Finger was a Moravian composer and virtuoso viol player. Born in Olomouc, in the modern-day Czech Republic, and arriving in England in 1685, Finger worked for the court of James II before becoming a freelance composer.
Hazel Brooks has spent a great deal of time researching the music for this recording, all of which may be found in the British Library manuscript Add. 31466, the single biggest source of violin sonatas by Finger.
She writes: ‘Finger’s sonatas contain a quirky mix of styles. Bohemian features from his homeland, simpler Corellian traits, and the occasional nod to the English Purcellian school are fitted together like crazy paving. This is what gives them their unique charm. Many are made up of contrasting short sections rather than separate movements, sometimes linked by short passages for basso continuo alone, both features characteristic of the Biber school.
Finger left a large number of sonatas for violin and basso continuo. We performed them all, immersing ourselves in the style, and this recording presents the finest selection from his output. Because he is known principally for his copious published recorder pieces, aimed at the amateur market, Finger has sometimes been dismissed as a composer of trivial, unadventurous music. I hope that this recording will help to change that mindset, so that Finger finally receives the recognition he deserves.’
“…Brooks’ eighteenth-century violin, rigged in baroque style, with a copy of a bow from 1686, seems just right for the music. David Pollock provides skilful partnership. Switching between a double-manual harpsichord and continuo organ adds a degree of variety to the sound picture… The recording is clear and bright, with little of the resonance that one might expect from the acoustic of the church where the recording was made …an attractive opportunity to get to know this neglected composer." (Brian Wilson, MusicWeb-International.com)
Duo Dorado:
Hazel Brooks, violin
David Pollock, harpsichord, organ 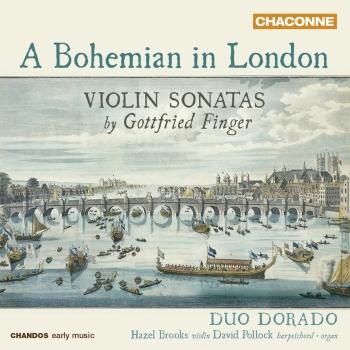 A Bohemian in London 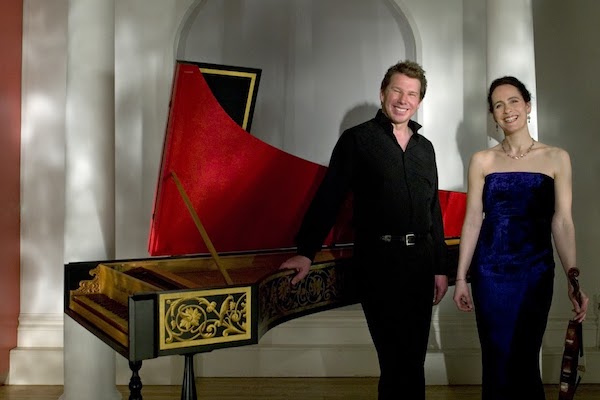 Hazel Brooks
studied at Clare College, Cambridge, the Hochschule für Musik und Theater in Leipzig, and the Guildhall School of Music and Drama in London, where she specialised in early music. Here she won the Christopher Kite Memorial Prize and the Bankers Trust Pyramid Award, and she was a finalist in the international competitions in York and Antwerp.
Hazel has given solo recitals in most major venues throughout the UK as well as in Germany, Italy, Russia and Spain. In addition to chamber music, she is sought after as an orchestral leader, appears as a concerto soloist, and has released three solo CDs. Hazel also has an interest in unusual instruments, especially the viola d'amore. She is in demand as a medieval-fiddle specialist throughout Europe and America, in particular touring and recording with duo Trobairitz, the Boston Camerata, USA, and the Camerata Mediterranea, a collaboration between Western and Moroccan musicians.
All her life, Hazel has been intrigued by things historical, and she spends much time in library archives, enjoying the process of turning dusty old manuscripts into living performances. Formerly an honorary research fellow at the University of Southampton, she is now a researcher at the University of Leeds, investigating violin music from seventeenth-century England.
David Pollock
David studied at the Royal College and Royal Academy of Music. He was inspired to take up historical performance because of a longstanding love for the music of J. S. Bach, and soon came to specialise in the harpsichord, winning the Croft Early Music First Prize.
Since then he has been in demand as a recitalist and concerto soloist, appearing at prestigious venues and festivals across the UK and abroad. Notable recent projects have included the complete harpsichord concertos of J. S. Bach and the complete keyboard music of William Byrd. Solo recordings include The French Harpsichord and O Mistris Myne:150 years of English virginals music. David is fascinated by the creative possibilities of basso continuo, with its potential for infinitely varied improvisatory colours, working with Duo Dorado, The Parnassian Ensemble, flautist Stephen Preston and others.
David is also interested in contemporary music and champions the harpsichord in this field. Many composers have written specially for him, including Colin Hand, Robert Page and Gavin Stevens. As the collection grows, David hopes to compile a modern-day 'Virginals Book' which would tie together his interests in early and modern music. David teaches at the University of Chichester.

Booklet for A Bohemian in London