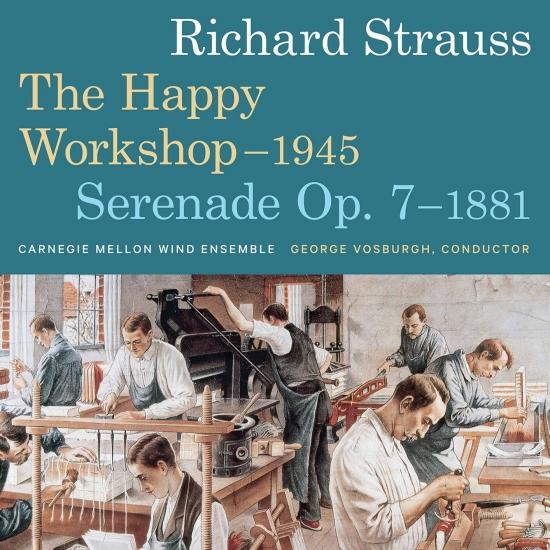 Presenting Rare Gems from Richard Strauss: Reference Recordings is proud to present our first album with the Carnegie Mellon Wind Ensemble, conducted and produced by George Vosburgh.
Carnegie Mellon Wind Ensemble traces its roots to the Carnegie Tech Kiltie Band, founded in 1908. Over the years, the Kiltie Band grew and enjoyed a long and distinguished history as a concert band. For decades, it was the preeminent performing ensemble at the University, appearing regularly in concert at Carnegie Hall in New York City. In modern times, single players perform each instrumental part, emulating an orchestral wind section. This style of playing in a large ensemble allows for the tonal colors found in a symphony orchestra.
Unusual and underperformed repertoire has long been a hallmark of the ensemble’s programming. This album exemplifies that, with the pairing of Strauss’ 1945 Symphony for Winds in E-flat Major (The Happy Workshop) and his 1881 Serenade for Winds in E­-flat Major, Op. 7. Notes writer Amanda Vosburgh states: “Taken together, the Serenade Op. 7 and The Happy Workshop form the bookends to a long and diverse body of work, marked by innovative chromaticism and complexity, but tethered at either end to the classical tradition.”
Conductor George Vosburgh has enjoyed a long and multi­faceted international career as a soloist, orchestral musician, teacher, and conductor. He holds a GRAMMY® for his 1985 Reference Recordings release of L’Histoire du Soldat with Chicago Pro Musica, and is a laureate of the ARD Music Competition in Munich. From 1992–2017, he held the Martha Brooks Robinson Principal Trumpet Chair in the Pittsburgh Symphony. He appears on numerous RR albums with Pittsburgh Symphony Orchestra. He has taught at Carnegie Mellon University since 1992 and has been Director of the Carnegie Mellon Wind Ensemble since 2011.
Carnegie Mellon Wind Ensemble
George Vosburgh, conductor 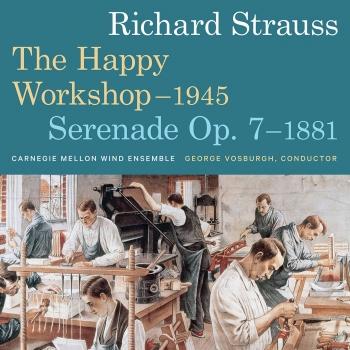 George Vosburgh
celebrated soloist and lecturer is internationally acclaimed for his virtuosity on the trumpet in recordings, concerts and recitals, as well as many guest artist performances in such locales as the Bonn Festival at Rolandsek, Germany, the Ravinia Festival, Chicago, and the Curs Internacional de Musica in Valencia, Spain. In 1992 he joined the Pittsburgh Symphony Orchestra as Principal Trumpet.
The National Academy of Recording Arts and Sciences awarded George Vosburgh a Grammy as Best New Classical Artist in 1985 for the Reference recording of Stravinsky's L'Histoire du Soldat with Chicago Pro Musica. He is a Bavarian Radio International Music Competition prize winner and a Gold and Platinum Record recipient for his work with the New Age music ensemble Mannheim Steamroller. In 2003 he was invited to become Principal Trumpet of the World Orchestra for Peace under the direction of Valery Gergiev. The orchestra has since performed on tour across Europe, Asia, and the Middle East, and produced many recordings and television programs.
Recordings featuring George Vosburgh include Trumpeter's Heritage, music by Bach, Böhme, Tomasi, Fasch, and Neruda with the Czech Philharmonic and Arnie Roth conducting, Trumpet Masterworks, pieces for trumpet and piano with Alaine Fink, and Four Trumpet Concerti, works by Haydn, Hummel, Telemann, and Leopold Mozart with the Seattle Symphony Orchestra and Gerard Schwarz conducting. All recordings are featured on the Four Winds label.
In 1994, Mr. Vosburgh organized the Pittsburgh Symphony Brass, a unique brass ensemble featuring some of the world's finest orchestral brass musicians in chamber ensemble. Since 1998, the Brass has enjoyed a flurry of recording and performance activity, releasing five CDs, including Bach's The Art of Fugue on the Four Winds label.
As an educator, Mr. Vosburgh has appeared in universities across Europe, Asia, and the United States, including Northwestern University, University of Michigan, UCLA, and Tokyo Music Academy, as well as the Tanglewood Fellowship program. He has lectured at the International Trumpet Guild's annual conference and recently published a critical edition of the Böhme Concerto for Trumpet and Orchestra in E minor published by Vosburgh Music Inc. He is currently on the faculty of Duquesne University and Carnegie Mellon University.
Mr. Vosburgh is a graduate of the University of Rochester's Eastman School of Music, where he was Principal Trumpet and featured soloist with the famed Eastman Wind Ensemble. He began his career as an orchestral trumpeter at age 19 as third trumpet and assistant principal of the Rochester Philharmonic Orchestra under the direction of David Zinman. After three years with the Rochester Philharmonic, he joined the Chicago Symphony Orchestra under the direction of Sir Georg Solti as the youngest member of the orchestra's world-famous brass section.
George Vosburgh holds the Pittsburgh Symphony Orchestra's Martha Brooks Robinson Chair and is an active member of various Pittsburgh Symphony Orchestra Committees.
Carnegie Mellon Wind Ensemble
Integral to this process is superb coaching in ensembles, both large and small. Every Carnegie Mellon music student is part of an orchestra, chorus, wind ensemble, or chamber group with the highest standards of discipline and musicianship. Along with studio and ensemble, the third essential element of our curriculum is the strongest possible basis in musical skills and knowledge. We have an internationally known program in eurhythmics and solfege, complemented by outstanding offerings in history and theory. One of the best ways to learn is to teach, and we support a significant program of pedagogy and music education as a co-requisite to performance, an invaluable training component for a life in music.
There is more to the study of music at Carnegie Mellon than these crucial elements. Carnegie Mellon is one of the great universities of the world; a university at the forefront of thinking and practice in technology and the arts. Our students demonstrate not only serious achievement in their musical preparation, but show strong aptitudes for diverse forms of learning and inquiry. Just as one’s work as an individual musician, whether on an instrument, as a singer, composer, or conductor, is greatly enriched by being placed in the larger context of a community of musicians, so our work in the intense discipline of music is immeasurably enriched by being conducted in a larger culture that honors and nurtures excellence in all the arts and sciences. The Carnegie Mellon School of Music is a leader in integrating today’s technology in performance, theory, history and composition.
Since its founding, part of Carnegie Mellon University’s core mission has been the creation of new knowledge and innovative means for making it useful in practice. The School of Music proudly advances this mission with a commitment that every student should practice the art of improvisation, and every member of the community should be involved in the creation and performance of significant new music. Our approach to the great musical monuments of the past is not to enshrine them in a museum, but to make them new with the freshness and vitality of the best music-making of our own time.