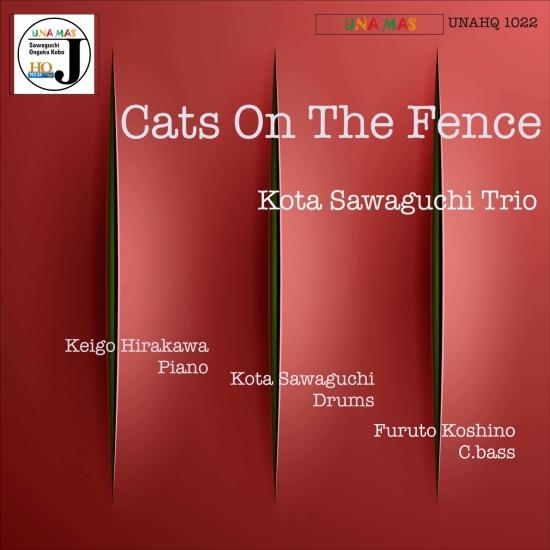 Info for Cats on the Fence

This is a first leader album by Kota Sawaguchi who plays drums. It is an album to have identical feelings while live performance at Jazz Club in TYO. With Keigo Hirakawa, a pianist living in America. Kota met him in the session in August 2017. Recording in May 2018, just before Hirakawa returned to the United States, Koshino Furuto was invited as the bass player that supports the trio. Please enjoy honest and free interplay that the trio each other felt at recording time.
In August 2017, UNAMAS monthly jam session hosted by me, Keigo Hirakawa suddenly appeared as a pianist. I remember that he had played 3 or 4 tunes that night, but by the time the jam session ended, I clearly imagined the conclusion that this album would be released. He has staying U.S.A, but one-year stay in JAPAN for his work. I invited the bassist Furuto Koshino and booked some of the live performances in the trio at once.
About that, Hirakawa's piano was brilliant. It is not a matter of style, he does not hesitate to play the sound which he felt like "I want to play" at that time. Honesty with respect to the expression form of Improvisation, and I was struck by the traces of training to realize it.
Bassist Koshino also made a great contribution to the music of the trio. Besides thinking the meaning of the series of the preceding and succeeding sounds, he is devoted to the music of the place that he thinks best. It was able to prove by this work that it is one of the few bassists that can play a proper performance.
Keigo Hirakawa, piano
Furuto Koshino, double bass
Kota Sawaguchi, drums 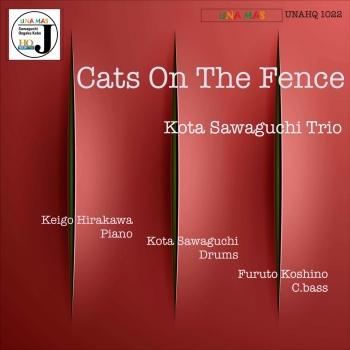 Cats on the Fence 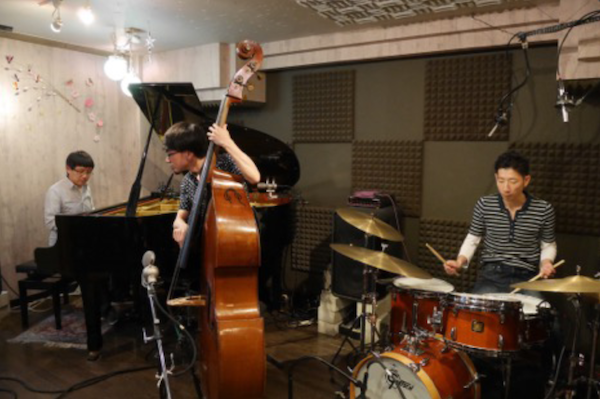 Keigo Hirakawa
Born in Japan and raised in the United States, Keigo Hirakawa is a jazz pianist who can be heard throughout the US and internationally. He has appeared on stage alongside the likes of Donald Byrd, Joe Lovano, JD Allen, Duane Eubanks, and Carla Cook. Trained in New York City and at New England Conservatory of Music in Boston, he was a student of many world-renowned jazz artists, including Stephen Scott, Cecil McBee, Danilo Perez, Alan Pasqua, Ralph Peterson, Bob Moses, and Jerry Bergonzi. Hirakawa has released two critically acclaimed CDs as a (co-) leader, "Hessler-Cabrillo Run Down" (2010) with saxophonist Joshua Smith and "And Then There Were Three" (2015). He has also appeared as a sideman on Brandon Coleman's "Infinite Loop" (2017). Hirakawa was previously the acting director of the Cornell University Jazz Ensembles and he is currently on faculty at the University of Dayton.
Furuto Koshino
Born June 20, 1988 in Ota-ku, Tokyo, Furuto Koshino grew up surrounded by music with parents who loved classical music. Inspired by the Oscar Peterson Trio, he began playing acoustic bass and electric bass during high school. Koshino attended Graduate School of Science and Technology at Sophia University, during which time he became active in the university jazz ensembles as well as at jazz clubs throughout Tokyo. He studied classical bowing techniques with Yasukazu Morizono. After graduation, he has pursued a professional career in music. As a bassist facilitating on both acoustic and electric instruments, Koshino covers a wide range of genres, including jazz, fusion, pops, R&B, gospel, and Latin music.
Kota Sawaguchi
Born in Tokyo in 1979, Kota Sawaguchi started playing drums in high school. He graduated from Sophia University Faculty of Humanities in Department of Philosophy, where he joined Yuji Ota (g), Kosuke Hagiwara (g), Yasuo Yamato (b), Furuto Koshino (b) in jazz ensembles. He has worked as a roadie for the jazz drummer Dairiki Hara and studied drums with Yusuke Nagano, Norio Watanabe, and Dairiki Hara. Since graduation, Sawaguchi ran a jazz club UNA MAS in Mitaka with his mother, where through his exposure to a variety of musicians he developed his own musical identity. During this period, he performed regularly at jazz venues such as UNA MAS, Kichijoji Sometime, and Numabukuro Organ Jazz Club. After a brief hiatus in Hakodate, Sawaguchi returned to Tokyo and remains active in the music scene, including his continued involvement at UNA MAS.

Booklet for Cats on the Fence