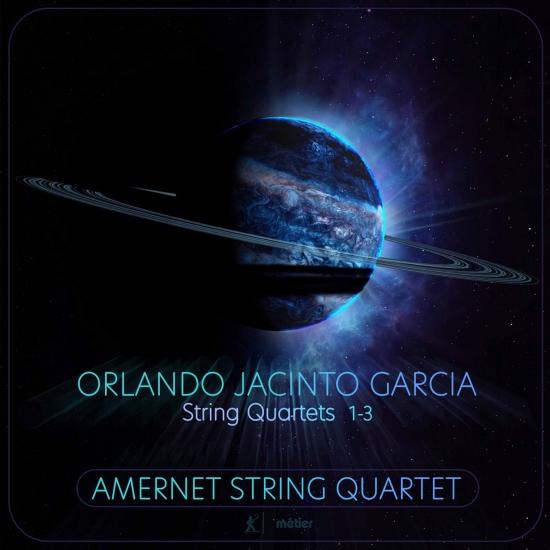 The music of the Cuban-American composer Orlando Jacinto Garcia inhabits a sonic universe of its very own, one where the musical landscape is constructed in order to evoke a thorough suspension of time. The three works on the present release correspond almost precisely to the past three decades of Garcia’s career and thus present for the interpreter and listener alike a kind of survey of his development. Garcia’s mentor and teacher was Morton Feldman and the aesthetic of Feldman and his inspiration are preoccupations which color several of Garcia’s compositions.
Garcia has composed over 200 works for a wide variety of genres and instrumental combinations, and has established himself firmly in the new-music world with his time-suspending, haunting explorations. Born in 1954 in Havana, he moved to the USA in 1961. As part of his great success he has received four Grammy nominations awards and honors too many to mention and his music has been recorded for 14 labels as well as Métier. A dedicated educator, Garcia is Professor of Music and Composer in Residence at the School of Music, Florida International University.
The Amernet String Quartet has been described by The Strad as a group of exceptional technical ability’ and praised by the New York Times for intelligent and immensely satisfying playing’. The ensemble is Quartet in Residence at Florida International University and its performance schedule has taken it all round the Americas, Asia, Europe and the Middle East. The Amernet is a strong advocate for new music and also for high quality neglected works of the past.
Amernet String Quartet:
Misha Vitenson, violin
Avi Nagin, violin
Michael Klotz, viola
Jason Calloway, cello 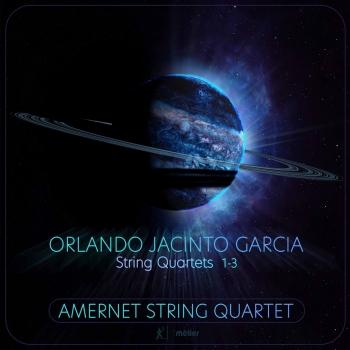 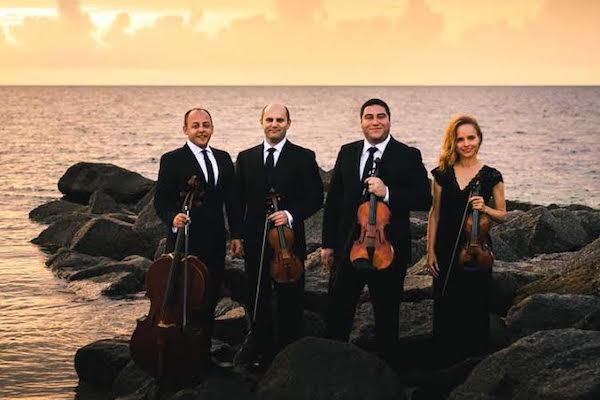 Amernet String Quartet
Praised for their “intelligence” and “immensely satisfying” playing by the New York Times, the Amernet String Quartet has garnered recognition as one of today’s exceptional string quartets and are Ensemble-in-Residence at Florida International University in Miami. Their sound has been called “complex” but with an “old world flavor.” Strad Magazine described the Amernet as “…a group of exceptional technical ability.”
The Amernet’s performance schedule has taken the quartet across the Americas and to Asia, Europe, and the Middle East. They have collaborated with many of today’s most prominent artists and ensembles including the Tokyo and Ying quartets as well as Shmuel Ashkenasi, Robert deMaine, Roberto Diaz, Gary Hoffman, Ida Kavafian, Anthony McGill, Sherrill Milnes, Michael Tree.Internationally, the quartet has appeared at major festivals around the world, including Cervantino, San Miguel de Allende, Aviv (Israel), and Colima (Mexico), while in Germany a critic commented that their playing was “fascinating, with flawless intonation, extraordinary beauty of sound, virtuosic brilliance and homogeneity of ensemble.” (Nürnberger Nachrichten). The Amernet’s U.S. engagements have included the Kennedy Center, the Tilles Center, Caramoor, Sunday Afternoons of Music in Miami, Ensemble Music Society, the Great Lakes Festival, Newport, Friends of Chamber Music in Arizona and Friends of Chamber Music in Syracuse, LPR in New York City, Chamber Music Society of Louisville, Music on the Edge in Pittsburgh, the University of Maine – Collins Center, and Market Square Concerts. The Amernet has also appeared as quartet soloist with the Cincinnati Symphony and Alan Gilbert. Earlier in their career, the Amernet won the gold medal at the Tokyo International Music Competition before being named first prize winners of the prestigious Banff International String Quartet Competition.
Prior to their current position at Florida International University, the Amernet held posts as Corbett String Quartet-in-Residence at Northern Kentucky University and at the University of Cincinnati College-Conservatory of Music. Additionally, the ensemble served as the Ernst Stiefel Quartet-in-Residence at the Caramoor Center for the Arts.
In its frequent touring, the Amernet has conducted workshops and master classes in Buffalo, Los Angeles, Memphis, and New Orleans, among other cities, as well as visiting residencies at colleges and universities including Columbia, Gettysburg, Penn State, Princeton, Western Illinois, and Wiliams and abroad in Colombia, Israel, Mexico, and Serbia among others. The Amernet String Quartet has received grants from the Corbett Foundation, the Greater Cincinnati Foundation, the LaSalle Foundation, the Fine Arts Fund, the Cincinnati Chamber Music Society, and the Amernet Society for school outreach projects, the commissioning of new chamber music works, and their concert and conversation series. The group was the recipient of a Chamber Music Rural Residency Award during which they divided their time among the communities of Johnstown, Somerset, and Indiana, Pennsylvania.
The Amernet has always been committed to the music of our time and has commissioned works from many of today’s leading composers, working closely with artists including Anthony Brandt, Guillermo Carbo, John Corigliano, Orlando Garcia, John Harbison, Toshi Ichiyanagi, Bernard Rands, Gerhard Samuel, Morton Subotnick, Dmitri Tymoczko, and Chinary Ung. Additionally, the group has made many recordings, among which are the Concerto for Clarinet, Oboe, String Quartet and Bass by John Harbison with Sara Lambert Bloom and Charles Neidich as soloists; The Butterflies Began to Sing, a work for string quartet, bass, MIDI keyboard and computer by Morton Subotnick; an album of quartets by the American composer Stephen Dankner; the string quartet and double bass quintet of Dmitri Tymoczko; and a pairing of the Debussy String Quartet and the Chausson Concert for Piano, Violin, and String Quartet, with James Tocco and Yehonatan Berick. In addition, the Amernet is keen on exploring collaborative projects and has recently appeared with Cantor Netanel Hershtik, jazz pianist Steve Allee, Josée Garant Dance, and the Kruger Brothers. The Amernet actively advocates for neglected works of the past and aims to enliven the concert experience through its innovative programming.
The Amernet String Quartet’s most recent seasons included tours throughout Europe and Latin America as well as the premieres of several new works for quartet and return engagements throughout the US and Israel.