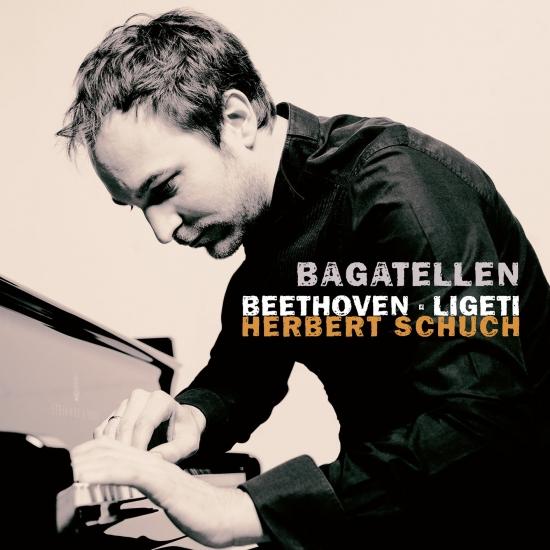 The gate opens. The music should sound solemn and magnificent, like an overture: majestic, like Beethoven’s Eroica. That is how Hungarian composer György Ligeti begins Musica ricercata, one of his early works from the early 1950s. In exemplary fashion, the cycle blends minimalist structures with a sumptuous array of colors. Behind each note lurks the exigency that nothing should escape the pianist’s attention: he should be aware of all that takes place in the present, while remaining prepared for everything that can occur in the next moment. Such challenges await the performer in Ligeti as well as in Beethoven. Long before he thought of coupling the works by Beethoven and Ligeti on CD, Herbert Schuch had tried out the combination in the concert hall. “I quickly get a feel whether a programme works well, or whether it’s just something I’ve conceived in my head. Of course I was aware that these cycles were never intended to be picked apart. I find it important to feel assured that I’m not undermining their essence, and that the new order also makes sense. Such a coupling would certainly not work in the case of a sonata.” (excerpt from the Booklet notes/Interview)
Herbert Schuch, piano 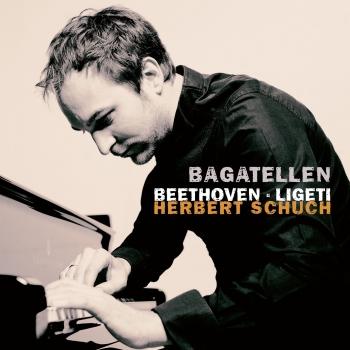 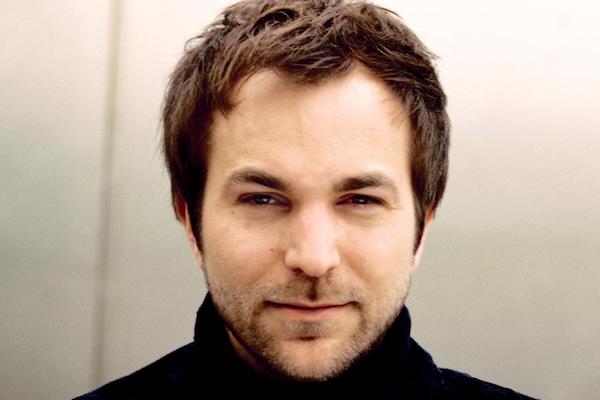 Herbert Schuch
The pianist Herbert Schuch has gained a reputation as being among the most interesting musicians of his generation with his strikingly conceived concert programmes and CD recordings. In 2013, he received the ECHO Klassik award for his recording of the piano concerto by Viktor Ullmann and Beethoven’s Piano Concerto No. 3 with the WDR Sinfonieorchester conducted by Olari Elts. In 2014, he issued the fascinating solo CD “invocation” with works by Bach, Liszt, Messiaen, Murail and Ravel, which engages with the sound of bells. He could be heard with this programme in piano recitals at the Salzburg Festival and the Stuttgart Musikfest, and in the Frauenkirche in Dresden and the Philharmonie in Berlin, among other venues. A piano-duet CD with Gülru Ensari, featuring works by Brahms, Hindemith, Stravinsky and Özkan Manav, was issued in early 2017.
Herbert Schuch has worked with a number of renowned orchestras, including the London Philharmonic Orchestra, the NHK Symphony Orchestra, the Camerata Salzburg, the Residentie Orkest Den Haag, the Bamberg Symphony, the Dresden Philharmonic and the radio orchestras of hr, MDR, WDR, NDR Hannover and Danish Radio. He appears regularly as guest at festivals such as the Heidelberger Frühling, the Kissinger Sommer, the Rheingau Music Festival, the Ruhr Piano Festival and the Salzburg Festival. Among the conductors with whom he has enjoyed successful associations are Pierre Boulez, Andrey Boreyko, Douglas Boyd, Lawrence Foster, Eivind Gullberg Jensen, Jakub Hrusa, Jun Märkl, Yannick Nézet-Séguin, Jonathan Nott, Markus Poschner, Michael Sanderling and Alexander Vedernikov.
Recently, Herbert Schuch played with the Mariinsky Theatre Orchestra under Valery Gergiev in the Gasteig in Munich, with the Deutsches Symphonie-Orchester Berlin in the Berlin Philharmonie, with the Camerata Salzburg, with the Orchestra della Svizzera Italiana and with the National Youth Orchestra of Germany on a European tour. He also made his début with the City of Birmingham Symphony Orchestra, at the Kennedy Center in Washington, D.C., at the Salzburg Easter Festival and at the Festival Radio France Occitanie Montpellier. In addition, he gave concerts with the Munich Philharmonic Orchestra, the Dresden Philharmonic, the Festival Strings Lucerne and the RAI National Symphony Orchestra.
His schedule for the 17/18 season includes fresh invitations to play with the WDR Sinfonieorchester and the Konzerthausorchester Berlin, as well as his début in the Elbphilharmonie in Hamburg. As a child, Herbert Schuch also played violin for 10 years and has been an enthusiastic chamber musician ever since. In the summer of 2017, he undertook a trio tour with violinist Julia Fischer and cellist Daniel Müller-Schott.
Herbert Schuch was born in Timișoara, Romania, in 1979. He had his first piano lessons in his native city, before his family moved to Germany in 1988, where he has lived since. He continued his musical studies with Kurt Hantsch and then with Prof. Karl-Heinz Kämmerling at the Mozarteum in Salzburg. Recently, Herbert Schuch has been especially influenced by his encounters and work with Alfred Brendel. He created an international stir when he won three major competitions in just one year: the Casagrande Competition, the London International Piano Competition and the International Beethoven Competition in Vienna.
In addition to his performance activities, Herbert Schuch is also involved in the organization “Rhapsody in School,” founded by Lars Vogt, which promotes classical music education in schools.