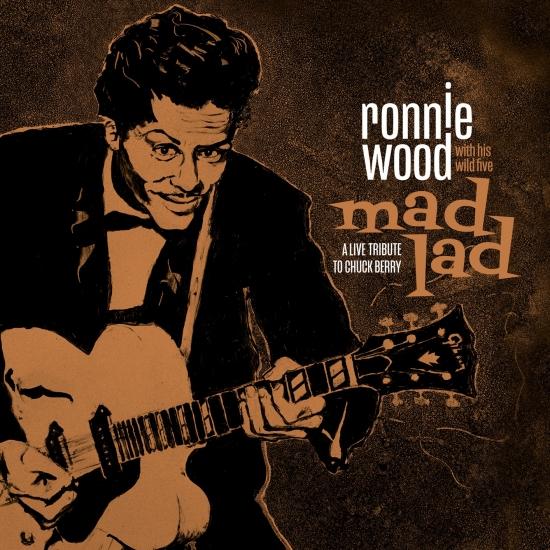 Info for Mad Lad: A Live Tribute to Chuck Berry

Ronnie Wood & His Wild Five TITLE: Mad Lad: A Live Tribute to Chuck Berry - Ronnie Wood will honor one of his musical heroes with Mad Lad: A Live Tribute to Chuck Berry. The album, released on November 15, 2019 is the first installment of a series of three albums Wood plans to record that pays tribute to those who influenced him.
Recorded in 2018 at the Tivoli Theatre in Wimborne, England, Mad Lad finds Wood and His Wild Five interpreting nine Berry classics, including "Johnny B. Goode," "Back in the U.S.A."and "Little Queenie," with Irish singer Imelda May guesting on three other tracks.
The album also features the Wood-penned "Tribute to Chuck Berry" and "Worried Life Blues," a Maceo Merriweather song that Berry released as the B-side to "Bye Bye Johnny."
Ronnie Wood, guitar 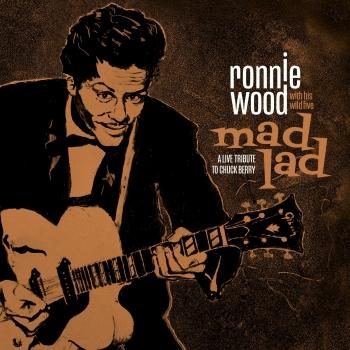 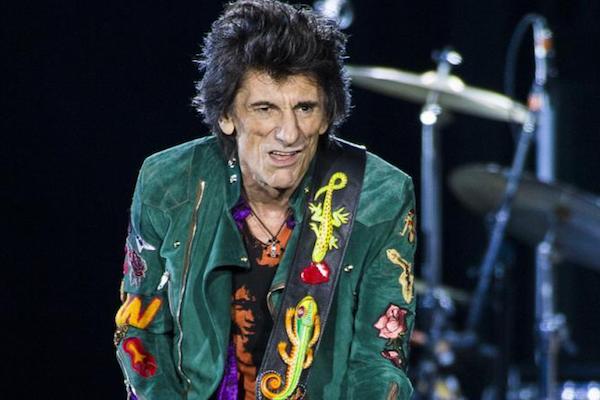 Ronnie Wood
Few can claim to have had as stellar, or diverse, a career as Ron Wood.
A two-time inductee into the Rock and Roll Hall of Fame (with the Rolling Stones and the Faces), he has played in some of the most influential rock groups of all time and guested with a who’s who of British music. At the same time, he’s enjoyed a remarkable parallel career as a highly regarded artist and, as a natural raconteur, has won a record three prestigious Sony Radio Personality awards.
Ronnie embarked on his musical career from a young age, when he joined local outfit The Birds, dropping out of Ealing Art College to focus on the band. Signed to the Stones’ label, Decca, the group’s incendiary take on R & B made them a popular live act up and down the country. However, their popularity failed to translate into record sales and the group eventually parted ways.
1967 marked a career milestone when Ronnie joined the Jeff Beck Group as bassist. With frontman Rod Stewart’s raw vocals, blues maverick Beck’s blazing guitar work and Ron’s instinctive bass lines, the Jeff Beck Group would write the blueprint for British hard rock. Despite an intense musical chemistry, band tensions often ran high and Ron briefly jumped ship to cult mod band, the Creation. Inevitably, the Jeff Beck Group would split for good in 1969 – just two weeks prior to a slot at Woodstock – but not before releasing two classic albums, wowing US audiences with their live performances and laying the groundwork for burgeoning rock acts like Led Zeppelin.
After a blink-and-you-miss it stint in Quiet Melon, with brother Art, fortune smiled again on Ronnie. After the departure of singer, Steve Marriott, the remaining three members of the Small Faces approached Ronnie and Rod with the offer of starting a new band. Renaming themselves the Faces, the band would inject a buccaneering rock-and-roll spirit into a dreary music scene, drawing huge audiences for their rollicking live shows and influencing a generation of punk musicians waiting in the wings. Back on 6 string, Ron helped pen some of the Faces’ finest and best known songs like ‘Ooh La La’ and ‘Stay With Me’, whilst also making major contributions to Rod Stewart’s first solo albums.
With a growing confidence in his abilities, Ronnie also released his own solo efforts during this time.
With their unique, rough-hewn charm, I’ve Got My Own Album To Do (1974) and Now Look (1975) boasted a list of starry cameos, including George Harrison, Rod Stewart, Bobby Womack and future bandmates Keith Richards and Mick Jagger. These albums helped to reinforce Ron’s credentials as a first-rate musician and songwriter.
In 1975 fate would once again intervene for Ronnie. With the Faces finally falling apart at the same time as Mick Taylor’s departure from the Rolling Stones, a chance encounter with Mick Jagger at a party would lead to Ronnie finally landing his dream job as the Rolling Stones’ guitarist. With his musical versatility and bonhomie, Ron proved a natural fit for the group and he’s long established himself as a vital part of the Rolling Stones sound. Keith Richards best describes his and Ron’s bluesy guitar interplay as, “the ancient art of weaving”, magically blurring the lines between rhythm and lead.
Even while a member of the Stones, Ronnie has continued to perform with a string of musical legends, ranging from Dylan to Bo Diddley. He formed the super-group the New Barbarians, featuring Keith Richards, former Faces keyboardist Ian McLagan, bassist Stanley Clarke, the Stones’ saxophonist Bobby Keys and drummer Joseph Zigaboo Modeliste from the Meters. He has also released a string of well-received solo albums.
Ronnie’s passion for painting is undiminished and he continues to to be an ever-in-demand artist.
2015 saw Ronnie reflecting on his past glories with the publication of ‘How Can it Be? A Rock & Roll Diary’, his 1965 diary of life-on-the-road with the Birds. The year also saw him celebrating a fantastic 40 years with the Stones and reuniting with the Faces in a swaggering, critically acclaimed one-off performance.
With the twists and turns of his career, Ron has lived more lives than most. Who knows what the next chapter will hold, but it will be sure not to disappoint!