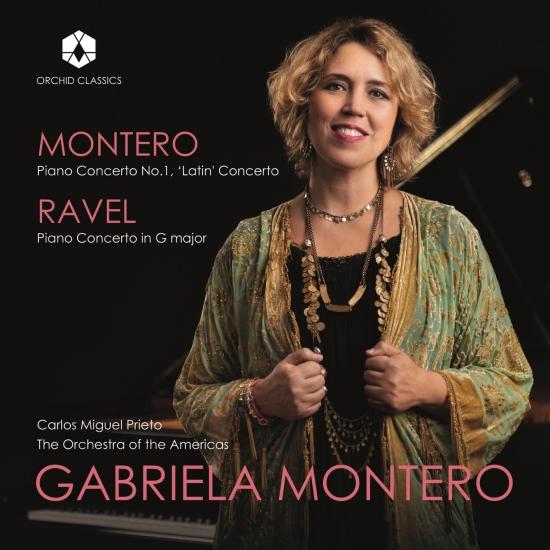 Gabriela Montero underlines her role as pianist-composer, paying homage to inextinguishable spirit of South America’s people with the world premiere recording of her Piano Concerto No.1, ‘Latin’ Concerto.
The new Orchid Classics album, complete with Ravel’s jazz-inspired Piano Concerto in G major, celebrates the musical creativity of the Americas.
‘Gabriela Montero [is] a marvellous pianist, a force of nature as an improviser and, as a composer, maybe a new hope for the piano concerto form in itself. That is what her first contribution to this genre suggests’, Leipziger Volkszeitung, review of premiere performance of ‘Latin’ Concerto, Leipzig Gewandhaus, March 2016
Gabriela Montero’s latest composition, Piano Concerto No.1, ‘Latin’ Concerto, trains the spotlight on the entire South American continent to reveal a world of relentless energy, exquisite beauty and profound tension. She takes the solo part in its world premiere recording, set for international release on Orchid Classics on 20th September 2019. Her chosen companion piece, Ravel’s jazz-inspired Piano Concerto No.1 in G major, offers another cosmopolitan composer’s reflections on America. The pan-American Orchestra of the Americas under its Mexican Music Director, Carlos Miguel Prieto, joins Montero in her celebrating the musical folklore of the Americas, both north and south.
The ‘Latin’Concerto encompasses the breathtaking diversity and psychological complexity of South America. The thirty-minute composition rises from a place where cultures collide, often merge and generate fresh forms of artistic expression. Montero’s score includes the rhythms of mambo, milonga, salsa, pajarillo, tango, soaring melodies and pungent harmonies. Above all, it portrays Latin America as much more than the world’s party destination, the unfeasibly happy home to fiesta and carnival. The work’s solo introduction sets the tone for what follows, embracing darkness and light, introspection and exuberance. An undertow of danger runs through the music, often swallowing a joyful theme or changing the atmosphere in an instant.
“When most people think of Latin America, they imagine a place where life, like the music, is full of rhythm, sensuality and primitive energy,” comments Gabriela Montero. “I know it’s appealing to market Latin America as a bubbly, fun paradise. But there are dark shadows over it all that can stop us from seeing clearly. These are the shadows of violence and corruption that have prevented some Latin American countries from reaching their full potential. This is the story I wanted to tell; this is why my ‘Latin’Concerto shows the complexities of South American life. I don’t want the common perception of Latin Americans to obscure the daily reality of what’s happening in some South American nations. They are not always agents of their own destiny.”
After a lifetime of experience improvising at the keyboard, often on themes suggested by audience members, Gabriela Montero turned to formal composition in 2011. Her first work for piano and orchestra, the polemical tone poem Ex Patria, was written to protest her native Venezuela’s descent into political chaos, economic ruin and social despair. “Ex Patria and my ‘Latin’ Concerto are very different works,” observes Montero. “Ex Patria was a political statement that I needed to make at a time when few were talking about the crisis in Venezuela. But, from a musical point of view, I wanted to use my voice to communicate a very different message in the ‘Latin’ Concerto, about the musical traditions of Latin America and Europe that have shaped me equally as an artist. It is a portrait of a modern, complex, diverse continent, painted on the canvas of European formalism.”
Maurice Ravel travelled to North America for a four-month concert tour in 1928. He arrived in the United States with a strong interest in jazz and blues, and absorbed lessons about both during his time there. The composer’s Piano Concerto No.1 in G major, written between 1929 and 1931, stands as an irresistible marriage of American jazz rhythms, blues harmonies, neo-classicism, Basque folk melodies and Spanish tunes. Its first movement echoes a theme from George Gershwin’s Rhapsody in Blue, a generous tribute given that Ravel had rejected the young American as a pupil in the mid-1920s.
“Ravel’s Concerto in G major fits very well with my ‘Latin’ Concerto,” says Gabriela Montero. “They are both about music migrating and evolving through the cross-pollination and cultural osmosis of globalization. The two pieces belong to different times but they both explore folk idioms taken from several places and cultures. I’ve grafted the Latin American musical language onto the three-movement, European, concerto form.” The ‘Latin’ Concerto’s finale contains what Montero describes as a ‘slightly camouflaged’ reference to ‘Pajarillo’, a famous Venezuelan folksong. “Every Venezuelan will recognize it. This album is about Latin America in all its wonderfulness but it’s also about learning from one another. Ravel went to New York and learned from Gershwin and jazz musicians; I’m a girl from Venezuela who went to school in the United States, studied in London, has lived in Canada and Holland, and travels the world. I’ve picked up all these ideas, these creative ‘passport stamps’ along the way, just as so many other musicians have done before me. The ideas should always travel freely around the world.”
Freedom of movement has arguably never been more topical than it is today. It has been a decade since Gabriela Montero visited her home country, feeling it unsafe to do so. An Honorary Consul of Amnesty International since 2015, she understands from personal experience the causes and consequences of exile. “The ‘Latin’ Concerto is most definitely not a political statement, unlike Ex Patria, but nor is it a naïve vision of a carnival continent. It is a profoundly personal expression of the continent in which I was born, a continent whose entire gamut of colors has, in one way or another, touched my life.”
“…here is the full Montero, revelling in her fine technique and unstoppable creative flow…” (BBC Music Magazine)
Gabriela Montero, piano
The Orchestra of the Americas
Carlos Miguel Prieto, conductor 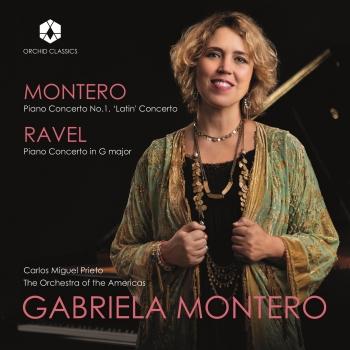 Gabriela Montero, The Orchestra of the Americas & Carlos Miguel Prieto 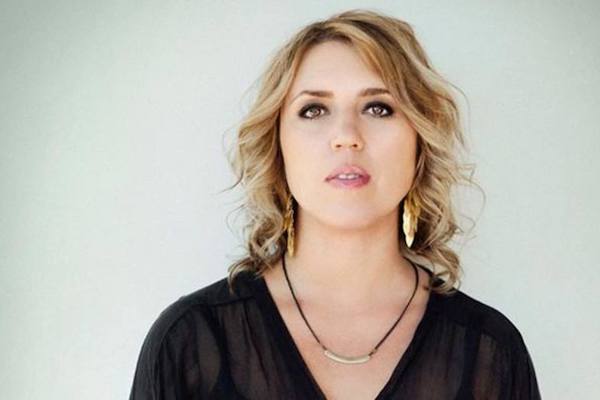 Gabriela Montero
Gabriela’s visionary interpretations and unique improvisational gifts have won her a devoted following around the world. Anthony Tommasini remarked in The New York Times, "Montero's playing has everything: crackling rhythmic brio, subtle shadings, steely power in climactic moments, soulful lyricism in the ruminative passages and, best of all, unsentimental expressivity."
Highlights from recent seasons include recitals at Avery Fisher Hall, Kennedy Center, Wigmore Hall, Vienna Konzerthaus, Berlin Philharmonie, Frankfurt Alte Oper, Cologne Philharmonie, Leipzig Gewandhaus, Munich Herkulessaal, Luxembourg Philharmonie, Lisbon Gulbenkian Museum, Tokyo Orchard Hall, and at the Edinburgh, Salzburg, Lucerne, Ravinia, Tanglewood, Saint-Denis, Dresden, Ruhr, Bergen, Istanbul, and Lugano festivals.
Gabriela has also been invited to perform with many of the world’s most respected orchestras, including the Los Angeles, New York, Liverpool, Rotterdam, and Dresden philharmonic orchestras; Chicago, San Francisco, Houston, Pittsburgh, Detroit, Atlanta, and Toronto symphony orchestras; the Gewandhausorchester Leipzig, Academy of St Martin in the Fields, WDR Sinfonieorchester Köln, and Zürcher Kammerorchester; the Cleveland, City of Birmingham Symphony, Philharmonia, and Komische Oper Berlin orchestras; and the Vienna Symphony, NDR Radiophilharmonie Hannover, Residentie, and Sydney Symphony orchestras.
Recent collaborators include conductors Claudio Abbado, Lorin Maazel, Leonard Slatkin, Sir Roger Norrington, Yannick Nézet-Séguin, Vassily Petrenko, Marin Alsop, Eivind Gullberg Jensen, James Gaffigan, Andrés Orozco-Estrada, Mario Venzago, Peter Oundjian, Mikko Franck, Carlos Miguel Prieto, Jaime Martín, Kristjan Järvi, Pietari Inkinen, and Patrick Lange.
Gabriela has recently given debut performances at the BBC Proms, and with the NDR Sinfonieorchester Hamburg, Bilbao Orkestra Sinfonikoa, Orquesta Sinfónica del Principado de Asturias, and the Malaysian Philharmonic Orchestra, as well as debut recitals at the Sydney Opera House, Amsterdam Concertgebouw, Antwerp deSingel, Manchester Bridgewater Hall, Rheingau Musik Festival, and Cheltenham Music Festival.
In addition to her brilliant interpretations of the core piano repertoire, Gabriela is also celebrated for her ability to improvise, composing and playing new works in real time. She says, "I connect to my audience in a completely unique way – and they connect with me. Because improvisation is such a huge part of who I am, it is the most natural and spontaneous way I can express myself." Whether in recital or following a concerto performance, Gabriela regularly invites her audiences to choose themes and ideas on which she improvises.
Gabriela has long held a desire to apply her abilities in improvisation and composition to larger ensembles and contexts. In 2011, she embarked on this new phase of her career by composing a tone poem for piano and orchestra, entitled Ex Patria. Her piece had its world premiere tour in October of that year with the Academy of St Martin in the Fields in London and in several German cities. In 2016, Gabriela performed the world premiere of her Piano Concerto No.1, the "Latin" Concerto, at the Gewandhaus Leipzig with the MDR Symphony Orchestra and Kristjan Järvi, to great critical acclaim.
Gabriela is also an award-winning and best-selling recording artist. Bronze medalist at the Chopin Competition, her debut disc, Bach and Beyond, featured her own improvisations on themes by Bach and held the top spot on the Billboard Classical Charts for several months. She has won two Echo Klassik Awards: the 2006 Keyboard Instrumentalist of the Year and 2007 Award for Classical Music without Borders. She received a Grammy® nomination for her Bach and Beyond follow-up, Baroque, in 2008. Solatino, inspired by her Venezuelan homeland, is devoted to works by Latin American composers and features her own interpretations on Latin themes. Gabriela's most recent album - an emphatic demonstration of the "total" artist as pianist, composer and improviser - features Rachmaninov's Piano Concerto No.2, Montero's own "Ex Patria", and 3 freeform improvisations. It earned Gabriela her first Grammy® Award for "Best Classical Album" at the 2015 Latin Grammy Awards®. ​
Gabriela’s innovative perspectives have also been sought outside the sphere of classical music. In May 2015, she was appointed as the first "Honorary Consul" of Amnesty International, in recognition of her sustained efforts to advocate for human rights in Venezuela, both through music and public discourse. That commitment also garnered a nomination for Outstanding Work in the Field of Human Rights by the Human Rights Foundation. Gabriela was invited to participate in the 2013 Women of the World Festival at London’s Southbank Centre, and has spoken and performed twice at the World Economic Forum in Davos-Klosters (Switzerland). She was awarded the 2012 Rockefeller Award for her contributions to the arts and played at Barack Obama’s 2008 Presidential Inauguration.
Born in Venezuela, Gabriela gave her first public performance at the age of five. At age eight, she made her concerto debut in her hometown of Caracas, which led to a scholarship from the government to study privately in the USA. She continued her studies under Hamish Milne at the Royal Academy of Music in London, graduating with the highest honours. She currently resides in Barcelona, with her husband and two daughters.