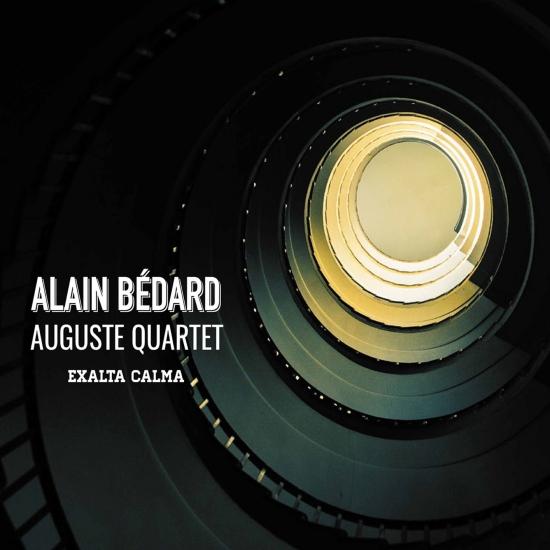 After playing "Circum Continuum" on several continents from 2016 to 2019, the Auguste quartet returns to us with a new opus that mixes time readings, contrasts and atmospheres, as well as sound climates. With "Exalta calma" Auguste invites us to superimpose two entities which could suggest an invariable distance animating the interior of a painting, a person and / or even a sound. The music of the quartet does not point to the intoxication of speed, but rather to the chills and the elasticity of the sentences, which with the arrival of the saxophonist Mario Allard, bubbling with life, energy and exultation.
Mario Allard, alto saxophone, soprano saxophone
Félix Stüssi, piano
Alain Bédard, double bass
Michel Lambert, drums 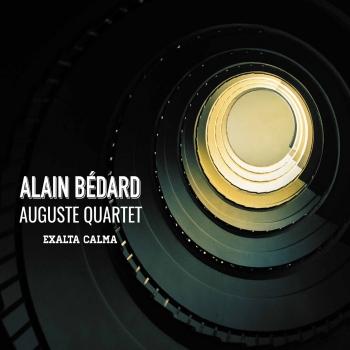 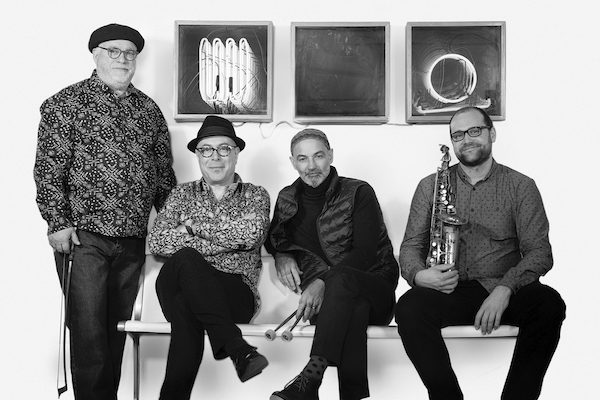 Alain Bédard
began his professional career in the 1980s, when he integrates naturaly some various Quebec formations of the time. His participation in various major events around the world, today it provides a fascinating experience. With a passage in the Word Beat with DADJE (Senegal-Quebec group), dancing alongside Martinique dancer Josianne Antourel, the classic with Marc Denis at the University of Quebec in Montreal and violinist Martin Foster (member of the UQAM Chamber Music Orchestra) and jazz with a variety of groups in Quebec and international artists including; Jazzlab Orchestra, André Leroux, François Bourassa, Frank Lozano, Pierre Tanguay, Michel Côté, Donny McCaslin, Stéphane Belmondo, Julien Loureau, Ted Nash, Pascal Shumacher, etc Alain Bédard continues an interesting career with his own jazz quartet AUGUSTE training, he walks for almost 20 years on all continents.
After giving hundreds of concerts and edited 5 albums whose CD “Auguste” (1997), “Sphere Reflection” (2006), “Bluesy Lunedi” (2008) nominated for an ADISQ and JUNO Award for Best Album of 2010 “Homos Pugnax” (2011) and “Circum Continuum” (2016). Alain with l’Auguste (trio, quartet and quintet) also played many times on CBC radio recordings and CBC, Radio France, Radio Belgium.
Alain Bédard is also artistic director and musician of Jazzlab Orchestra, which was founded in 2003 and is recognized as one of the leading bands of Canadian jazz. The band recorded 7 albums: "Reunion" (2004), "Désir" (2006), "Chance Meeting" (2008), "Octo Portraits" (2010), "Portraits d'ici (2012), "World Colors" (2014) & Quintessence (2019).
He is also founder of the Effendi label active since 1999 and has published 158 albums, organized 1230 concerts & 120 national & international Tours.
In 2015, Rimouski Festijazz handed him his “Heron d’Or” for its participation in the development of Quebec jazz in the world and for having set up the first edition of the Rimouski Jazz Meeting.
AUGUSTE QUARTET is support for concerts and tours by Effendi Records, Musicaction, Sodec and sometimes by Canada Council
JAZZLAB ORCHESTRA is support for concerts and tours by Effendi Records, Musicaction, Montreal Council, Sodec and Canada Council.
Auguste Quartet
Since 1997, Auguste Quartet has toured around the world. More than 400 concerts and 5 super complimented albums here and abroad. Highlighting its 20th anniversary, have recently been shot in South Korea, Japan and twice in Europe the new Auguste Quartet, composed of Mario Allard (sax), Félix Stussi (pn), Alain Bédard (cb), and Michel Lambert (drs), returns to propose the fresher “Circum Continuum” or space and time, linking the link fragile elements that conceive us, so intimate, but so different.