Ennio Morricone’s film music provides an infinite treasure trove of creative thinking, associated with the most varied of images. It is also extremely versatile, just waiting to be delved into, reworked and rediscovered – his compositions would still be equally enjoyable and perfectly recognizable performed by a Bulgarian choir or a quintet of ocarinas. But throwing jazz into the mix takes things to a whole new level, creating what feels like a perfect match, a natural, perhaps even inevitable partnership. This stems in part from a distinctive feature of Morricone’s music: it places highly emotional melodies within a texture of intelligent harmonies, and jazz does exactly the same, particularly in the hands of someone like Stefano Di Battista.
The saxophonist takes the composer’s themes and plays with them as if they were a magical substance, that special and mysterious music that almost inexplicably fills our souls. And he didn’t feel compelled to stick to Morricone’s most famous film scores, the ones etched into the public consciousness. In some cases, Stefano has chosen lesser-known themes, or rather tunes from lesser-known or forgotten films, like “Veruschka” or “What Have You Done to Solange?” both to dig deeper into a repertoire where there is still much to be explored, and as a reminder that Morricone provided the soundtrack to more than 500 films, only a handful of which are still celebrated today. These tunes are both refined and very precious, and of course you also get the pure pleasure of hearing themes you know inside and out turned into perfect jazz standards, like the swinging and witty “Metti, una sera a cena”, or “The Good, the Bad and the Ugly” reinvented as a duelling improvisation, with the sax taking on the brief flurry of notes inspired by the call of the coyote, before dissolving into the pure emotion of “Deborah’s Theme” from Once Upon a Time in America. This is one of Morricone’s greatest ever works, one he was very fond of because it epitomised his ideal of a melody that achieves the maximum possible result with the minimum number of notes.
Then there is a nimble reworking of The Mission, with the original oboe effortlessly transposed to the soprano sax, and Flora, a surprise, previously unreleased number that the revered composer gifted to Di Battista. Ultimately, the mechanism feels flawless and could spawn a series of other records – as if part of Morricone’s thinking was always, perhaps unwittingly, directed towards jazz. The album “Morricone Stories” will be released April 2021.
Stefano Di Battista, alto- and soprano saxophone
Fred Nardin, piano
Daniele Sorrentino, double bass
Andre Ceccarelli, drums 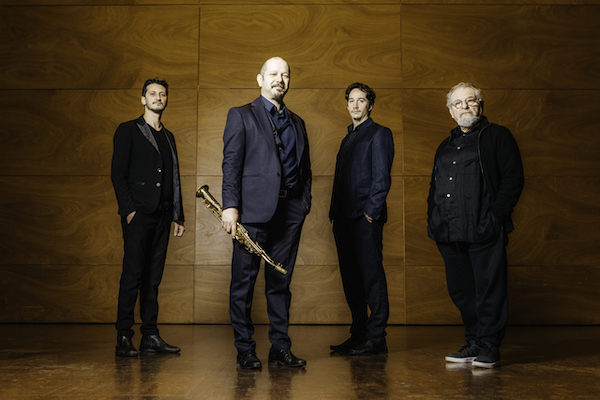 Stefano Di Battista
Born 14 February 1969 in Rome, saxophonist Stefano Di Battista came to jazz through the records of Art Pepper and Cannonball Adderley. Encouraged to move to Paris by pianist Jean-Pierre Como, who heard him during the summer of 1992 at the Calvi Jazz Festival, Stefano quickly found his footing in the French capital with the help of several musicians, notably drummer Aldo Romano and the conductor Laurent Cugny, who invited Stefano and trumpeter Flavio Boltro to join his Orchestre National de Jazz, established in 1994.
Though mainly active in France, Stefano also maintains close links with the Italian jazz community, having recorded with compatriots Enrico Rava (1996), Rita Marcotulli (1998), Daniele Scannapieco (2003) and Dario Rosciglione (2004).
The combo on his third album for Blue Note, Round About Roma (2002), therefore, is an international quartet featuring Belgian pianist Éric Legnini, French drummer André Ceccarelli and Italian bassist Rosario Bonaccorso, backed by a symphonic orchestra arranged and conducted by Vince Mendoza.
Stefano followed up with another two albums for Blue Note: a tribute to Charlie Parker, and the virtuosic Trouble Shootin’ (2007) featuring Fabrizio Bosso on trumpet and Baptiste Trotignon on the Hammond. His subsequent album Woman’s Land (2011), on Italian label Alice Records, took as its inspiration several historic female figures of the 20th century. Stefano’s ability to engage in a musical conversation with other artists is evident on his later albums, among them Giù la Testa (2014), recorded with French guitarist Sylvain Luc.