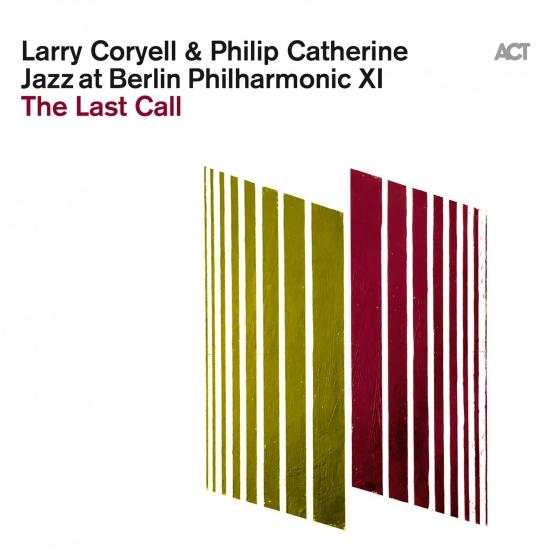 The two guitar icons Larry Coryell and Philip Catherine have a long history and a close musical affinity, despite their different influences on this and the other side of the Atlantic. Recorded on January 27, 2017 as part of the "Jazz at Berlin Philharmonic" series, "The Last Call" is the last recording of Larry Coryell, who passed away four weeks later on February 19, 2017. And an echo of a very special relationship between two very great guitarists, full of creative compatibility, enthusiasm and deep mutual understanding.
The wheel has come full circle with the album “Last Call”, featuring the duo of Larry Coryell and Philip Catherine. This live recording from the Philharmonie in Berlin captures the culmination of an evening under the banner “Art of Duo” in Siggi Loch’s “Jazz at Berlin Philharmonic” series.
After four decades, it marks the two guitarists’ return to the scene of one of their very first major triumphs. In 1976 they appeared as part of the band 11th House at the Berliner Jazztage at the same venue, but it was the moment when just the two of them stepped forward and performed as a duo which the “Die Zeit”’s critic hailed as possibly the high point of the whole festival. It was a decisive step in what would become a highly successful collaboration.
Coryell and Catherine subsequently made two superb studio albums: “Twin House” (Atlantic, 1977), recorded in London, and the very fittingly named “Splendid” (Elektra, 78), recorded in Hamburg. Both of these LPs have definitely stood the test of time. Both also had the same producer, who credited on the sleeve as “Siegfried E. Loch”. As he wrote to both the musicians in November 2016 on the 40th anniversary of the recording of “Twin House”: “I am pleased that we are going to be celebrating this music in the concert on 24 January 2017 in Berlin." On “Last Call” Coryell and Catherine play four numbers, followed by first-time appearances of duos consisting of Philip Catherine and pianist Jan Lundgren and then of Larry Coryell with bassist Lars Danielsson, plus a valedictory jam on “Green Dolphin Street” with all four of these musicians plus trumpeter Paolo Fresu.
Coryell and Catherine, two “brilliant, mutually attuned musicians” as the liner note for “Twin House” describes them, were born less than six months apart during the Second World War. Texas-born Coryell and London-born Catherine have different musical heritages, but their affinity and above all their complementarity shone through every time they played together. When playing as part of larger units, there would always be at least 20 minutes when the pair would perform as a duo. They toured extensively in both Europe and the Americas in the late 1970s. For example their work together brought them into a project with Charles Mingus near the end of the bassist’s life, and they also made a quartet album with Stéphane Grappelli and Niels-Henning Orsted-Pedersen. One particular highlight was their appearance at the inaugural Sao Paulo Jazz Festival in September 1978, when their performance was seen by a TV audience of 17 million. Catherine still laughs when he remembers the reason why he and Coryell became instant celebrities and could – briefly but literally! – stop traffic in Brazil: the duo had their TV slot immediately before the screening of the Muhammad Ali-Larry Spinks fight in Las Vegas.
The evening of 24 January 2017 found both guitarists on ebullient form, as can be heard right from the opening track. With Larry Coryell on acoustic guitar and Philip Catherine on electric, they launch themselves once more in to the arpeggiated work-outs of “Miss Julie” – the opening track of “Twin House” – with a verve and energy which belies their years. There is a divine moment at the end of “Manha de Carnaval” when Coryell is picking out a series of perfectly placed hushed harmonics over the most delicate accompaniment from Catherine. And later, in “Bag’s Groove”, Coryell’s duo with Lars Danielsson, the quotes from other tunes fly joyously from his fingers: everything from Denzil Best’s “Move” from the “Birth of the Cool” to the opening bassoon solo from Stravinsky’s “Rite of Spring”.
And yet the palpable exuberance of this concert is now tinged with sadness: this was to be Larry Coryell’s very last appearance in a concert hall. Four weeks later, Coryell died at the age of 73 after a two-night trio residency at the Iridium in New York. So what remains is the memory, and above all this last example of something very special indeed: what Siggi Loch once described as the “creative compatibility, the enthusiasm and mutual understanding” of two very great guitarists, Larry Coryell and Philip Catherine.
Larry Coryell, guitar
Philip Catherine, guitar
Jan Lundgren, piano
Lars Danielsson, bass
Paolo Fresu, trumpet 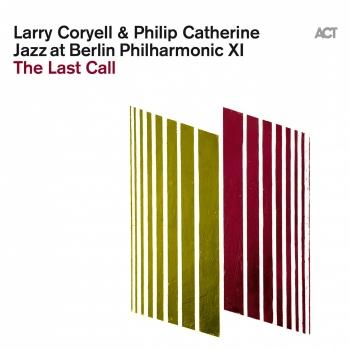 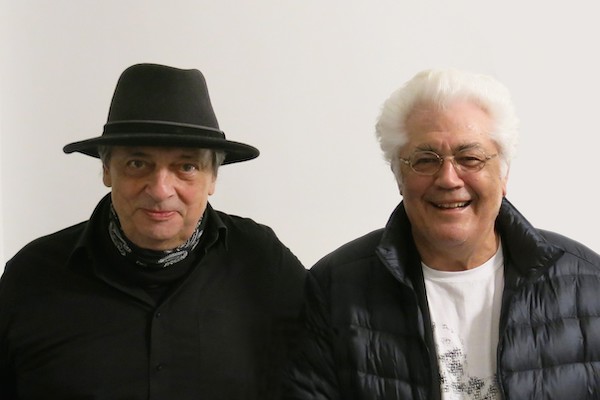