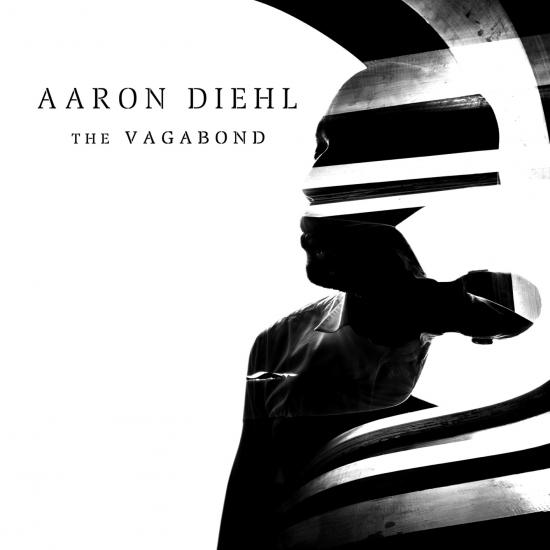 Info for The Vagabond

First Record Since 2015 Features Mix of Originals and Standards Alongside Longtime Collaborators, Bassist Paul Sikivie and Drummer Gregory Hutchinson
Aaron Diehl’s elegant pianism and musical sophistication take center stage once again on his third album for Mack Avenue Records, The Vagabond. His previous outings for the label—The Bespoke Man’s Narrative (2013), which reached No. 1 on the JazzWeek Jazz Chart; and Space, Time, Continuum (2015) featuring jazz masters Benny Golson and Joe Temperley—have already established him as one of the jazz world’s most vibrant stylists.
The Vagabond, featuring Paul Sikivie on double bass, and Gregory Hutchinson on drums, includes original tunes by Diehl, as well as music by past jazz greats, John Lewis and Sir Roland Hanna, along with Russian composer Sergei Prokofiev and American composer Philip Glass. That range of repertoire suggests a sort of musical double life, a state of affairs that helped give rise to the album’s title.
“I have always been fascinated in the piano’s range of tone and color,” says Diehl. “This is partly rooted in my earlier interest in classical piano literature. Regardless of genre, I try to maintain an awareness of sound and nuance. Having opportunities to work with Philip Glass or perform George Gershwin’s ‘Concert in F’ with the New York Philharmonic has encouraged me to broaden my approach to pianism. They have placed me in situations completely out of my comfort zone.”
As a 2007 graduate of the Juilliard School, he had studied with Russian virtuoso Oxana Yablonskaya. “She always reminds me about my tearing up when she played during our lessons,” he remembers, “with such a deep, rich sound. She knew that I had a sensitivity to certain musical qualities. I’d often think, ‘Wow, I wish I could do that.’”
As it turns out, he could. Yet, his focus at the time was necessarily on jazz performance, studying with Kenny Barron and Eric Reed (Diehl also worked closely with Fred Hersch in recent years). The invitation to interpret music by Glass, like the opportunity to perform with the Philharmonic—which was facilitated through its music director at the time, Alan Gilbert—came as a pleasant opportunity…and a real challenge. It has all paid off.
“With Glass, I’m still finding how to maintain the integrity of that sound world, and also incorporate my own ideas into his language,” says the pianist. “On the other hand, as a musician also interested in incorporating African-American musical traditions, I’m discovering various approaches to playing as a soloist with orchestras in that context,” says Diehl, summing up the situation, “It’s a bit of an itinerant existence.” Hence, the album title, The Vagabond.
Yet, his roots run deep. He was the winner of the 2011 Cole Porter Fellowship from the American Pianists Association; the 2013 recipient of the Jazz Journalists Association Award for Up-And-Coming Artist; and the 2014 Monterey Jazz Festival Commission Artist, one of the youngest musicians to receive this honor, for which he composed “Three Streams of Expression,” dedicated to pianist and composer John Lewis. Earlier, in 2002, Diehl was awarded Outstanding Soloist at Jazz at Lincoln Center’s Essentially Ellington Competition, after which he was invited to tour Europe with the Wynton Marsalis Septet. More recently, Diehl served as the long-time musical director for GRAMMY® Award-winning vocalist Cécile McLorin Salvant.
Aaron Diehl, piano
Paul Sikivie, double bass
Gregory Hutchinson, drums 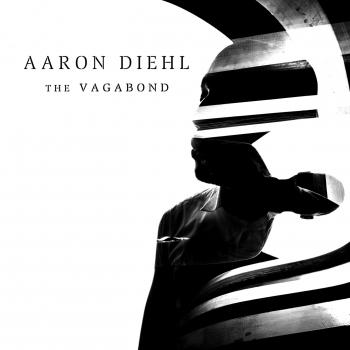 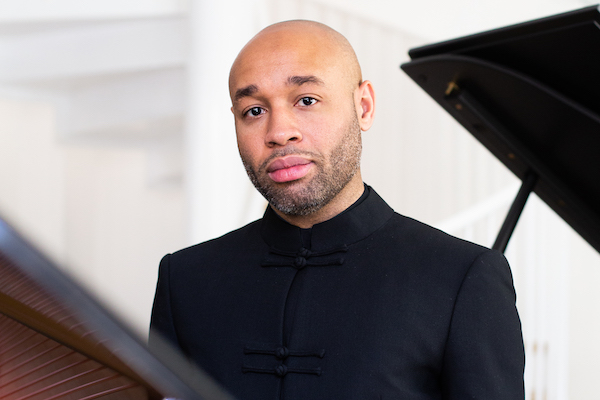 Aaron Diehl
A 33-year-old classically trained pianist and composer, Aaron Diehl has made an indelible mark on the jazz world over the last 15 years. Showing an affinity for early jazz and mid-20th century “third-stream” music, his latest evolution comes as he begins to tackle modern classical works, performing works by George Gershwin with the New York Philharmonic, Cleveland Orchestra, Minnesota Orchestra and LA Philharmonic.
Diehl has collaborated with living masters ranging from from NEA Jazz Master Benny Golson to 20th century classical titan Philip Glass, while establishing himself as one of the preeminent interpreters of the Great American Songbook in his own trio and with the vocalist Cécile McLorin Salvant.
Critics from The New York Times jazz critics have have extolled Mr. Diehl’s “melodic precision, harmonic erudition, and elegant restraint,” while the same paper’s classical critics have noted, “Mr. Diehl play[s] magnificently.” His meticulously conceived performances, collaborations, and compositions are refreshing as his highly personal aesthetic spearheads a union of tradition and original artistry, while bounding ahead on an uncharted course.
Born in 1985 in Columbus, Ohio to a funeral director and a former Olympian turned education administrator, Aaron Diehl grew up in a nurturing musical environment. His grandfather, Arthur Baskerville, a pianist and trombonist was an early influence. He began studying classical piano at age 7, while his passion for jazz was further fueled while attending the Interlochen Arts Camp as a pre-teen, where he met the pianist Eldar, who exposed him to Oscar Peterson and Art Tatum recordings.
At age 17, Diehl was a finalist in Jazz at Lincoln Center’s Essentially Ellington competition, where he was noticed by Wynton Marsalis. Soon after, Diehl was invited to tour Europe with the Wynton Marsalis Septet (Marsalis has famously referred to him as “The Real Diehl.”) That Fall he would matriculate to the Juilliard School, studying with jazz pianists Kenny Barron and Eric Reed and classical pianist Oxana Yablonskaya. Diehl came to wider recognition in 2011 as winner of the American Pianists Association’s Cole Porter Fellowship, which included $50,000 in career development and a recording contract with the esteemed Mack Avenue Records. ​
Shortly before Salvant released her highly acclaimed WomanChild, which featured Diehl and his trio, the pianist released his Mack Avenue debut, The Bespoke Man’s Narrative, a tribute of to the sophisticated classicism of the Modern Jazz Quartet; particularly the pianist John Lewis. At the time, the New York Daily News wrote, “Diehl, a rising star of jazz piano, has an individual talent so huge that one day he may extend the jazz tradition,” The Financial Times commented, “as sharp, opulent and stylish as the title might suggest. [Diehl]’s fluency is remarkable and his light-but-sensuous touch oozes class without breaking boundaries.” ​
Upon the release of his 2015 Mack Avenue album, Space, Time, Continuum —featuring special guests Golson and Joe Temperley — in some ways a reaction to the classicism of Bespoke, the New York Times reframed its prior appraisal. “Mr. Diehl, who once might have suggested an emissary from another time himself, has brilliantly advanced his art under current conditions.” The Irish Times noted, “his second studio album...hints at new horizons.” Golson told the Wall Street Journal, “He’s going to go the distance. He’s going to be one of the important ones.”
Diehl’s first solo album, Live at Caramoor (2008), was a concert recorded at the Caramoor Festival. Live at the Players (2010) featured two of his trios: Quincy Davis and David Wong, and Paul Sikivie and Lawrence Leathers. He won the 2012 Prix du Jazz Classique from the Académie du Jazz for Live at the Players; the 2013 Jazz Journalists Award for Up-And-Coming Artist, and in 2014 was the Monterey Jazz Festival Commission Artist, becoming one of the youngest artists to receive that honor. For Monterey, he composed “Three Streams of Expression,” dedicated to Lewis.
Diehl served in 2014-2015 as Music Director for Jazz at Lincoln Center’s New Orleans Songbook series, performed in the 2014 New York premiere of Philip Glass’ complete Etudes at the Brooklyn Academy of Music, collaborated with the flamenco guitarist Dani De Morón in Flamenco Meets Jazz (produced by Savannah Music Festival and Flamenco Festival). He served as the inaugural Artistic Director of the Catskill Jazz Factory in Tannersville, NY.
In 2017, Diehl embarked on a new venture. He would play with the New York Philharmonic and the Cleveland Orchestra as featured soloist on George Gershwin’s Piano Concerto in F. Diehl played on the NY Phil’s opening gala performance of their 2016-2017 season in conductor Alan Gilbert’s final season. The chief classical critic of the New York Times wrote, “Mr. Diehl...had brilliance when called for, during jazz-tinged passages of Lisztian runs and octaves. The roomy freedom of [his] playing in bluesy episodes was especially affecting. He folded short improvised sections into the score, and it’s hard to imagine that Gershwin would not have been impressed.” Of the same piece, the Cleveland Plain Dealer wrote “In his Cleveland debut, [Diehl]...was right on the money, a responsive and virtuosic interpretation marked by keen vitality and intimate communication with his peers.” Of his performance with the Los Angeles Philarmonic, the LA Times writes, "...whatever blues Gershwin got from Broadway were given the real thing by Aaron Diehl, who added considerably improvised embellishment to the piano solos."
In addition to Salvant and Marsalis, Diehl has toured or recorded with Wycliffe Gordon, Warren Wolf, Lew Tabackin, Matt Wilson, and the Jazz at Lincoln Center Orchestra. When Diehl performed the music of Philip Glass at Brooklyn Academy of Music, he was exposed to the work of pianist and composer Timo Andres, with whom he plans to collaborate in the future. He has performed Gershwin’s Rhapsodies with the Amarillo Symphony and will perform Glass’ Works for Piano and The Complete Piano Etudes in Aarhus, Denmark in Fall 2017. He will release his latest album "The Vagabond," on Mack Avenue Records in the November 2019.