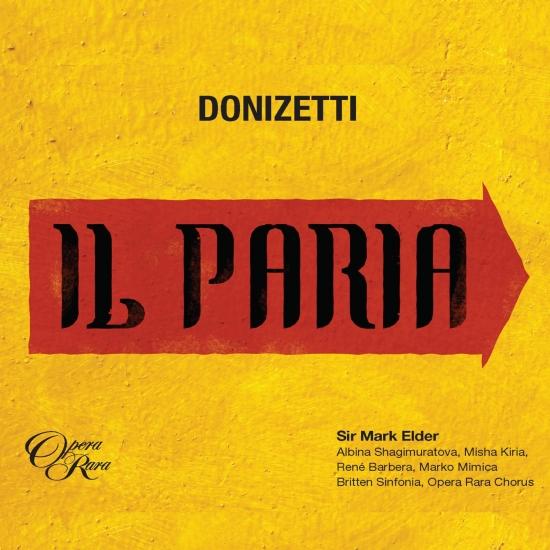 Set in 16th-century India, Il Paria is a powerful and moving story of impossible love, social barriers and religious intolerance. Donizetti was particularly proud of his work, reusing many of its melodies in future compositions. Returning to Opera Rara following our multi award-winning recording of Rossini’s Semiramide, Albina Shagimuratova leads a stellar cast including René Barbera, singing one of the most demanding roles ever written for tenor, and the talented Georgian baritone Misha Kiria in title character.
Opera Rara returns to Donizetti when it presents another rarity, Il furioso all’isola di San Domingo, in an entirely new performing edition. Carlo Rizzi, the company’s newly appointed Artistic Director, conducts Britten Sinfonia in their second collaboration with Opera Rara; Albina Shagimuratova once again takes the lead soprano role. The week before the Barbican concert, Opera Rara will record Il furioso, with the album scheduled for release in 2022.
Opera Rara was founded by Patric Schmid and Don White in 1970 with a huge ambition: to document all Donizetti’s operas through recordings and, where necessary, new performing editions. Under Sir Mark Elder’s eight-year tenure, Opera Rara expanded its repertoire to include French grand opera, French operetta and Italian verismo works.
Whilst the impact of the global pandemic meant postponing the release of Il Paria by nine months and the recording and concert of Il furioso all’isola di San Domingo by a year, the company celebrated its 50th anniversary in 2020 with another of its close collaborators: Ermonela Jaho. Following her debut Wigmore Hall recital presented by Opera Rara in February, in September 2020, the company released Jaho’s debut recital disc – Anima Rara – exploring music championed by the Italian soprano Rosina Storchio, the creator of Cio-Cio San in Puccini’s Madama Butterfly. As The New Yorker noted, “Jaho’s gentle timbre, nuanced inflections, and, above all, tonal clarity are enchanting, revealing a compelling portrait of Storchio’s art—and her own.”
Albina Shagimuratova, soprano
Kathryn Rudge, mezzo-soprano
Rene Barbera, tenor
Misha Kiria, baritone
Marko Mimica, bass-baritone
Thomas Atkins, tenor
Opera Rara Chorus
Britten Sinfonia
Mark Elder, conductor 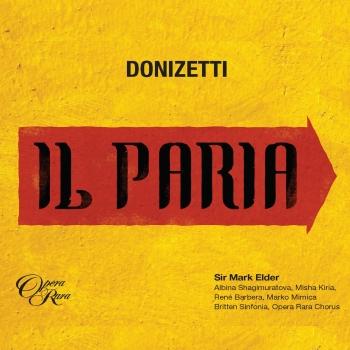 Albina Shagimuratova
was born in Tashkent. Graduated from the Kazan Aukhadeyev School of Music as a choral conductor and entered the Kazan State Zhiganov Conservatoire. From her third year, she transferred to the Moscow State Tchaikovsky Conservatory, class of Professor Galina Pisarenko. Graduated from the conservatory with distinction and undertook a trainee assistantship. Honorary graduate of the youth opera program of the Houston Grand Opera (USA), where she studied from 2006 to 2008. Over the years, she has taken lessons from Dmitry Vdovin in Moscow and Renata Scotto in New York. Whilst a student in Moscow, she was a soloist at the Stanislavsky and Nemirovich-Danchenko Moscow Music Theatre where she performed the roles of the Swan Princess in The Tale of Tsar Saltan and the Queen of Shemakha in The Golden Cockerel by Rimsky-Korsakov.
International acclaim came to the singer in 2007, when she won 1st prize and the Gold Medal at the International Tchaikovsky Competition. One year later came the singer’s debut at the Salzburg Festival as the Queen of the Night in Die Zauberflöte with the Wiener Philharmoniker under Riccardo Muti. She subsequently appeared in that role at the Metropolitan Opera, Covent Garden, La Scala, the Wiener Staatsoper, the Bayerische Staatsoper, the Deutsche Oper in Berlin, the San Francisco Opera and the Bolshoi Theatre of Russia among other theatres.
Albina Shagimuratova’s repertoire includes roles in operas by Mozart and bel canto composers, among them Lucia (Lucia di Lammermoor), Donna Anna (Don Giovanni), Semiramide (Semiramide), Elvira (I puritani), Violetta (La traviata), Aspasia (Mitridate, re di Ponto), Konstanze (Die Entführung aus dem Serail), Gilda (Rigoletto), the Contessa di Folleville (Il viaggio a Reims), Neala (Donizetti’s Il paria) and Anna Bolena (Anna Bolena) among others.
As a guest soloist she has appeared at the Glyndebourne Opera Festival, the Edinburgh International Festival, the BBC Proms and at major opera houses and concert halls in Europe and America.
In 2011 she performed the role of Lyudmila in Dmitri Tcherniakov’s production of Ruslan and Lyudmila, with which the historic Bolshoi Theatre reopened following reconstruction (the opera was recorded on DVD).
She made her debut at the Mariinsky Theatre in 2015 in a concert performance of the opera Lucia di Lammermoor. In the 2018–2019 season she joined the theatre’s opera company.