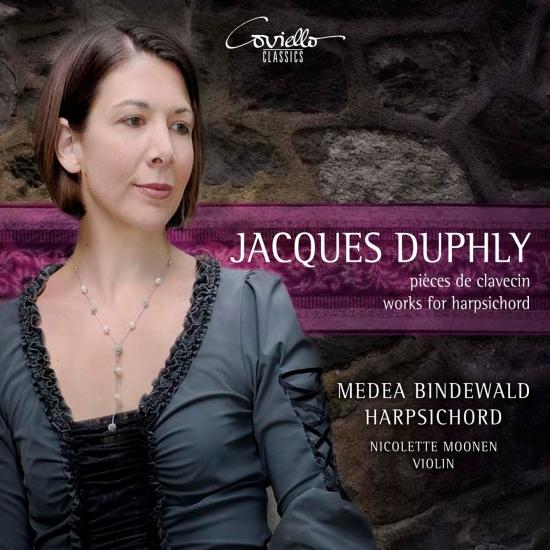 Paris in the mid eighteenth century: the harpsichord was one of the leading solo instruments in the court of Versailles and in the salons of the nobility and bourgeoisie; there was a boom in the manufacture of large, sonorous harpsichords. In 1742 the former organist Jacques Duphly settled in Paris and, from then on, devoted himself exclusively to this instrument. He rapidly gained a reputation as one of the finest players and teachers in the city, praised for his delicate touch and graceful playing style.
This album presents a selection of character pieces and stylized dance movements taken from three of his four books of pièces de clavecin, published over the course of almost 25 years. It includes his most famous pieces such as the grand Chaconne in F major and Médée, the only portrait of a mythological figure in the collection, as well as the lesser known but intriguing six movements with accompaniment by a violin. In this particular genre, the violin plays a supplementary role supporting the harpsichord, which remains the lead instrument. Imitative phrases alternate with passages where the violin simply duplicates the top voice of the harpsichord. This duplication has the effect of adding a special register to the harpsichord, and there are moments when the two instruments blend so well with each other that only one instrument seems to be playing.
„Often portrayed as a minor composer putting his signature to the last pages of a language that was already outmoded, Duphly was nevertheless a virtuoso and an important representative of cultural life in Paris, interested in the manufacture of musical instruments and conscious of the advantages of the new French fortepianos. Will we hear his music resound on such instruments soon? For now, Medea Bindewald seduces us with her performance on a fine harpsichord of the French school (Keith Hill, after Blanchet), which she plays with the delicacy, the fire, and the conviction of an accomplished artist. The original ideas about registration, which are applied with discretion, as well as her subtle work on the ‘jeu inégal’ show that the delicate development of the interpretation of French music often comes from our neighbouring friends … The added ornaments refresh the ways in which we listen. The sense of construction is as admirable in the sizeable Chaconne as it is in the modest yet touching Rondeau in C. ‘La Médée’ deploys a wonderful vigour without ever yielding to brutality. Supported by the excellent violinist Nicolette Moonen, the German harpsichordist presents a remarkable version of the pieces with violin, which is sensitive to the dance as well as to the theatrical dimensions of the musical language. This beautiful version will be ranked equal to the complete recording by Christophe Rousset (Aparté, Diapason d’or).“ (Philippe Ramin, Diapason)
Medea Bindewald, harpsichord
Nicolette Moonen, violin