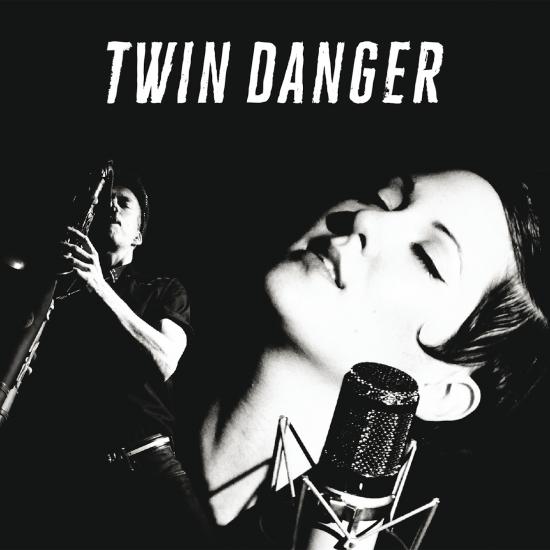 Noir jazz meets midnight blues in the music of Twin Danger an intriguing new group formed by Vanessa Bley and Stuart Matthewman. Twin Danger updates a classic sound in a contemporary style with such captivating Bley/Matthewman originals as “Pointless Satisfaction,” “Just Because,” “Sailor,” and “Coldest Kind of Heart.” The album sessions also yielded one surprising cover song, a distinctively different interpretation of the hard–rock track “No One Knows” by Queens of the Stone Age. The core of Twin Danger is Bley and Matthewman, however on-stage for their sultry live performances the band expands with an outfit of five more musicians.
The duo of Bley and Matthewman each possess an interesting musical pedigree. Vanessa Bley grew up in a close-knit artistic community in upstate New York. Her mother is the painter and video artist Carol Goss; her father is the renowned freejazz pianist Paul Bley. A multi-instrumentalist who was self-taught on both guitar and bass, Vanessa was also classically trained on piano and takes lead vocal and co-songwriting duties with Twin Danger.
Stuart Matthewman, born in Hull, England, co–founded the group Sade with Sade Adu,Paul S. Denman, and Andrew Hale. Stuart and Sade co–wrote many of the best–loved songs on the band’s multi–platinum albums including “No Ordinary Love,” “By Your Side,” and “Your Love is King.” In 1996, Matthewman, Denman, and Hale formed Sweetback who also recorded several successful albums. Subsequent projects for Matthewman included working with Maxwell on three of the superstar’s albums and remixes under the name Cottonbelly.
The origins of Twin Danger began after Bley moved to New York to attend the Fashion Institute of Technology for Cosmetics & Fragrance Development and Marketing. Within a short time, Vanessa was showcasing her original material at various downtown venues and occasionally co–writing songs with different collaborators, including Estonian pop singer Kerli. Kerli was writing separately with Matthewman – and it was she who suggested that Vanessa would vibe with the talented Englishman.
Stuart plays guitar and keyboards, but his unmistakable tenor saxophone tone predominates in Twin Danger. “Vanessa and I share an odd, eclectic taste in music, from Black Sabbath to Chet Baker to film soundtracks,” says Stuart. “We weren’t thinking it all out or going for a particular sound – Twin Danger just happened the way it did. We were looking at photos and watching movies, and we imagined we were in a movie.” Vanessa concurs: “The whole ‘20s Paris; writers at the bars—that whole cinematic aspect has been a big part of [our songwriting].”
The name Twin Danger is explained by Vanessa Bley: “It refers to the alter ego, the part of you that can be wild or irrational or even destructive – but it’s still a part of you and not accepting that is what makes it dangerous.”
“We’re making music to get lost in. It’s warm and beautiful but there are dark undercurrents revealing fundamental issues of the self. That’s what makes it Twin Danger. We like to fit into that category of what you want to play when the lights go down.” 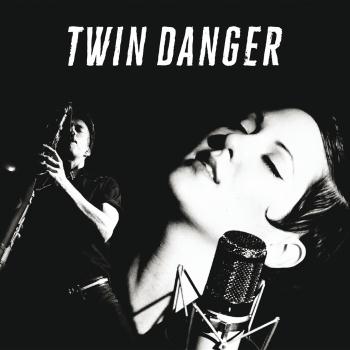 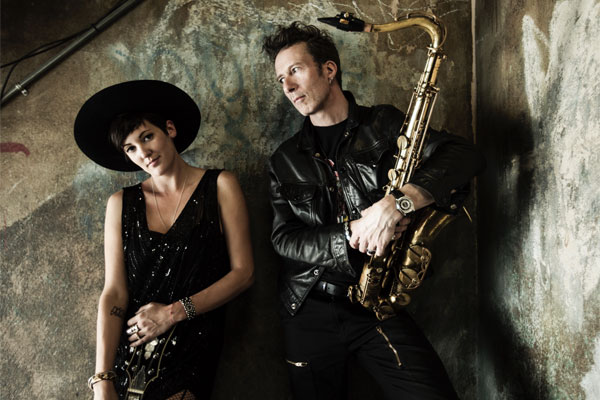 Twin Danger
is the love child of heroin jazz and seductive darkness. Vanessa Bley and Stuart Matthewman. Two hearts beating as one; risk takers with an appetite for the unknown.
The daughter of famed jazz pianist Paul Bley, Vanessa is a singer, composer, guitarist and pianist. Her voice is as fragile as it is pure, however she best lives the meaning of Twin Danger. While not crooning along side Matthewman, she plays with her psychedelic pop-rock outfit Beast Patrol, who just released their second record.
Stuart plays guitar, for sure, but his tenor sax is what gets under your skin. As core member of Sade, this makes sense. Together, Bley and Matthewman make music that is sleek, sexy, and sultry. Jazz-swing meets heartbreak-pop; cinematic blues for the modern romantic. The musical union of Vanessa and Stuart is a natural one. “We talked about music,” Stuart recalls. “I said I’d written these chords with a dissonance that I liked, but that I didn’t know what to do with.” A few hours later, Vanessa sent Stuart a finished song. “It was as simple as that,” Stuart says, smiling.