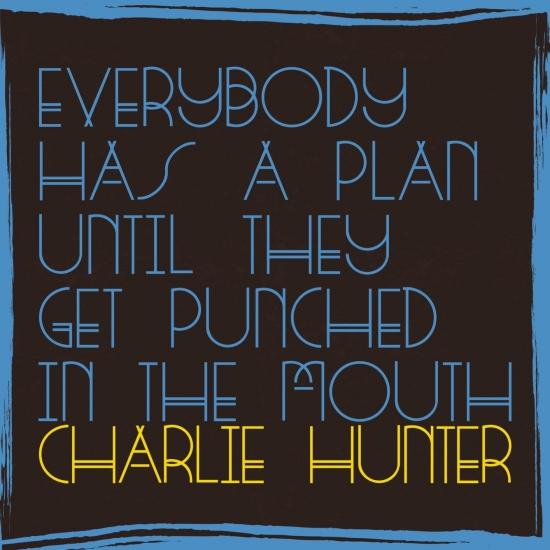 Since 1993, Charlie Hunters mindboggling guitar technique has garnered him fans around the world, critical acclaim and recordings with some of the most prestigious names in jazz and pop.
Now with his 17th album, the title of which refers to a quote once uttered by heavyweight boxing champion Iron Mike Tyson, Charlie Hunter returns to his quartet to perform 10 all-new Blues, Rock, Jazz and Latin-flavored songs alongside bandmates Kirk Knuffke (cornet), Bobby Previte (drums), and Curtis Fowlkes (trombone).
Recorded 100% live in a studio in Hudson, New York, on songs including No Money, No Honey and Latin For Travelers, Charlie performs his simultaneous bass, rhythm and solo magic on his custom 7-string electric guitar, proving once again that Charlie Hunter is a leader of modern jazz guitar improvisation.
Charlie Hunter, 7-string guitar
Curtis Fowlkes, trombone
Kirk Knuffke, cornet
Bobby Previte, drums
Recorded in Hudson, NY 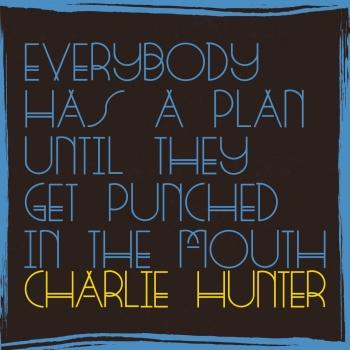 Everybody Has A Plan Until They Get Punched In The Mouth 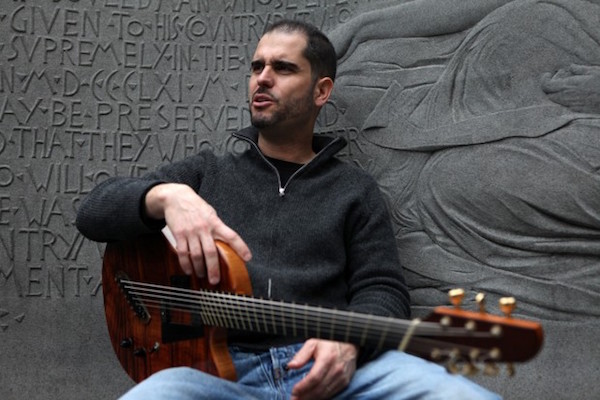 Charlie Hunter
is a freak. For one thing, as at least one writer has noted, he has two brains, the only thing that can explain his prodigious output. He also has never seen “American Idol.” Freaky. In addition, he’s a musician who has a vice-like grip on why he does what he does, which makes him super freaky. Yow.
Born of hippie parents, blah blah blah. Grew up poor, yadda yadda yadda. Eight-string guitar, whoopee shit. Sure, the eight-string thing is cool—if not a little demented—and the reason we all know who he is, but it only reflects Charlie Hunter the craftsman. But what’s really most notable about Charlie Hunter is the force behind the craft; the drive that causes him to do the improbable; his raison de rock.
It bears noting that Charlie Hunter got his big break in 1992 as a member of Disposable Heroes of Hiphoprisy, touring with U2 and Primus on the outrageously miscalculated ZooTV Tour. A storybook beginning, certainly—if the story was penned by the Marquis de Sade. But it served an important purpose.
"For somebody who was like 23, and had just been spending a lot of time in really awful supper club jazz singer gigs and working in the day moving furniture, it was welcome relief,” recalls Hunter. “And also the ability to be a fly on the wall in the bowels of the highest echelon of the bacchanalia that is the music industry. I learned a lot about what I didn't want to do with my life."
So Charlie Hunter became, and remains, a jazz shark of a sort. While certainly reflecting on what he’s devoured musically, he never stops to rest. It’s just not in his nature. Even in his Blue Note days, back when he thought it was important to adhere at least somewhat to the established but unwritten rules of jazz, he wasn’t content to be just another guitar virtuoso (my words, not his). He asked noted luthier Ralph Novak of Novax guitars to build him a seven-string guitar. He wanted to play the guitar and bass parts himself—sheer lunacy to be sure, but understandable. We’ve all met bass players.
The series of polished records he released on Blue Note were great, sure, but they hardly left the indelible mark he was trying to put down. He was just another “guitar guy,” albeit one with a mutated brain/finger connection. But always he kept moving. The lineup and band configuration were kept malleable, allowing Hunter to shift easily from trio to quartet to duo. And shift he did. Grinding out an album nearly every year since 1993 on various labels (he made up for his laziness with some multi-album years), Hunter pursued solo, duo, trio, quartet, and quintet combinations (plus side projects like Groundtruther, Garage a Trois, TJ Kirk, and Pound for Pound) while experimenting with diverse recipes of instrumentation. Saxes, trombones, vibes—it all depended on where his evolution was taking him. You may still see (and hear) the “guitar guy,” but compared to the fossils left behind from his earlier existence, the evolution is obvious. And now, with Mistico, the latest trio recording, we’ve got a whole new animal. The trio for Mistico consists of Simon Lott on drums and Erik Deutsch on piano, Fender Rhodes, and CasioTone(!). And Charlie Hunter is there, too, sitting back and enjoying himself, happy to be a fish out of water. Freaky.