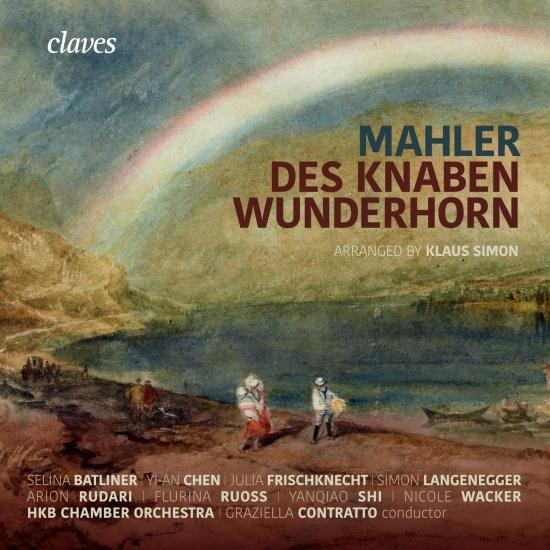 Fish that speak and donkeys as judges; deserters, phantom drummers, cheeky angels – but also wild, flirty country girls and macho guardsmen, even the Lord God himself: The Wunderhorn songs of Gustav Mahler are populated by a highly original, heterogeneous set of characters. What could be their common factor, apart from their typical Mahlerian tone? The answer is to be found some 90 years before these songs were composed. In 1805, under the collective title “The boy’s magic horn. Old German songs”, the two German Romantic poets Achim von Arnim und Clemens Brentano began publishing these and many other texts. They conceived their collection as a conscious revival of folk nature poetry and as offering a mirror to the “Riches of our whole people (and) its own inner, living art”, as von Arnim wrote. But these texts also reflect the (early) Romantic delight in the primordial, unspoilt and elemental.
At that time, folk poetry was regarded as an anti-Enlightenment guarantor of beauty and truth in art. Soon after the first Wunderhorn texts were published, however, the two editors were criticised for their interventions in the texts, which went far beyond what might be expected of mere collectors. They seemed to have encroached all too willingly on the natural formal language of the originals (though even the Brothers Grimm also heavily “adjusted” the texts of the fairy tales they collected and published…). Trying to find originality while at the same time subjecting their originals to manipulation was obviously not considered a contradiction in terms by these early Romantics …
The arrangement of an arrangement of an arrangement …
In the eponymous orchestral songs by Gustav Mahler, who from 1892 onwards busied himself for almost ten years with the literary and compositional possibilities of the Wunderhorn texts, we can observe a fascinating approach that shines a light on issues of artistic intervention: “They are boulders that everyone can shape into what he will”, is how he supposedly described his own approach to the “originals” in conversation with Natalie Bauer-Lechner. For this composer, the Wunderhorn texts were one component of his compositional process of sketching and shaping his music. Indeed, his practice of recycling (and “upcycling”) went so far that we speak of Mahler’s first four symphonies as his Wunderhorn symphonies, in which concrete, extended quotations and even whole songs bring vocal music and the symphonic into a close, fraternal relationship. We find whole symphony movements based on Wunderhorn texts (such as Urlicht, Es sungen drei Engel, Das himmlische Leben etc.), and often – as, for example, in Revelge – Mahler composed a song as a kind of follow-up to a symphony. In another letter, he wrote that “nothing less than the first movement of my Third [Symphony] must serve as a study for the rhythm of this song”.
Judging from his general reading habits, Mahler possessed an impressive literary sensibility. So it is not easy to explain his enthusiasm for folk poetry. He was a passionate, constant reader, though his preferences suggest that he was conservative in his literary leanings. His library included philosophical essays, the complete works of Goethe and Shakespeare, much by Jean Paul, Cervantes, Laurence Sterne, Charles Dickens, Dostoyevsky, Tolstoy, then all the Greek tragedies and a few contemporary poets from his circle of friends. The fact that he also had space for all the volumes of the science reference book Brehm’s Animal Life seems at first astonishing, but not so much, the more one thinks about it …
Tradition is sloppiness (Gustav Mahler)
If we look at the list of singers who gave the first performances of these songs, we can see that “Gustl” did not just work with established artists such as Anna von Mildenburg, whom he affectionately addressed – as quoted above – as his “Schaferl” (literally “little sheep”, though in connotation more along the lines of “lambkin”). His preferred performers also included much younger singers such as the baritone Anton Moser and the soprano Selma Kurz (who also had an affair with Mahler that almost culminated in matrimony). Kurz performed the intimate songs Wo die schönen Trompeten blasen and Das irdische Leben under Mahler in Vienna in 1900 when she was just 26 years old – which in fact corresponds to the average age of the singers on the present recording. The Wunderhorn songs, with their wonderful texts, provided the vocal students of the HBK with a welcome opportunity to situate their voices within the intoxicating, purring, chattering, commenting context of an orchestra, but without having to cope with the pressure of the large-scale orchestration of the originals.
The specifically vocal freshness of these young singers in their timbre and interpretation, and in their dialogue with the chamber group, would probably have delighted Mahler (given the reports of his strong antipathy to falsely understood tradition). The transparency of Simon’s arrangements, the vigour of the vocal colours and – who knows? – the fact that these young professionals are not yet “jaded”, perhaps means that their interpretation of these songs of the “folk” is in fact close to the old, Romantic ideal of the natural and the true. In this sense, this world-première recording is also an experiment that at the same time mischievously yet profoundly invites our listening expectations to adapt to new climes.
Yi-An Chen, tenor
Selina Batliner, soprano
Yanqiao Shi, baritone
Julia Frischknecht, soprano
Simon Langenegger, baritone
Nicole Wacker, soprano
Arion Rudari, baritone
HBK Chamber Orchestra
Graziella Contratto, conductor 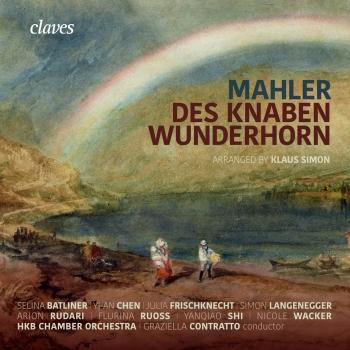 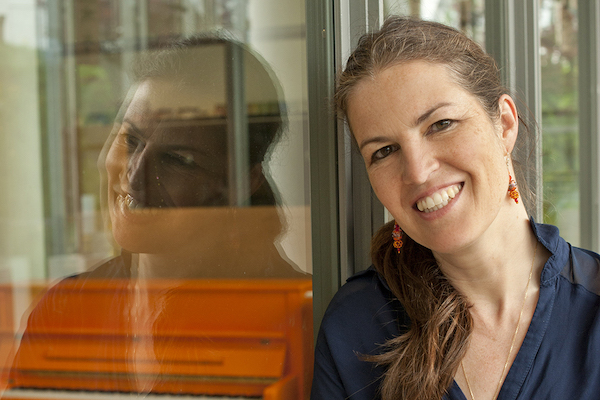 Graziella Contratto
Graziella Contratto represents a new generation of conductors who focus on highly inspired and refreshing concepts in their programs from Renaissance to contemporary music. Surprising references in the choice of her repertory and an openhearted communication towards the audience reflect her important relationship with literature, architecture, dance and film.
In 1998 after her studies as a pianist, chamber musician, teacher for Music history and conductor, Graziella Contratto is invited by Claudio Abbado to become his musical assistant in the Berlin Philharmony and the Easter Festival in Salzburg. She assisted for Boris Godunow, Tristan und Isolde and Simone Boccanegra (Salzburg Easter Festival 1998/1999), Cosi fan tutte ( with the Mahler Chamber Orchestra, Ferrara 2000) as well as for different recordings and World tours with the Berlin Philharmonic orchestra conducted by C. Abbado.
In 2000 the Orchestre National de Lyon (David Robertson) elects Graziella Contratto à l’unanimité as their resident conductor : besides different tasks as a conductor, she will found the Académie de l’orchestre National de Lyon, a successful training plateforme for young orchestra musicians.
In 2003 the Swiss conductor Graziella Contratto becomes the new Artistic Director of the Orchestre des Pays de Savoie in France and thus the first female chief conductor in France. During the following six years, the orchestra enlarges its audiences and the French media applause G. Contratto’s programmes.
She works regularly with soloists and singers as Anna Larsson, Stefan Genz, Lothar Odinius, Patrizia Ciofi, Roberto Saccà, Renato Bruson, Donald Littaker, Raphaël Oleg, Anne Gastinel, Kolja Blacher, Michel Portal, Bruno Ganz, Nicolas Angelich ….
Graziella Contratto conducted the World Premiere of Hans Werner Henze’s Knastgesänge at the Opera af Basle (1996). In the same year she also gave her debut at the Lucerne Festival performing compositions by Pierre Boulez on the occasion of Paul Sacher’s 90 th birthday. Several world premières of compositions by e.g. Andrea Scartazzini, Jörg Widmann, Daniel Glet, Suzanne Giraud, Alain Bérlaud, Jean Louis Agobet etc. were premiered under G. Contratto’s direction.
In 2002 she produced Piazzolla’s Tango-Operita Maria de Buenos Aires in Switzerland and directed the Opera-Collage Olympische Gesänge in Berlin’s Pergamon-Museum, the beginning of a long-time artistic friendship with the German stage director and choreographer Mirella Weingarten, culminating in Viktor Ullmann’s opera Der Kaiser von Atlantis (Theresienstadt 1944) in France.
She has conducted the Tonhalle Orchestra Zurich, the Deutsche Kammerorchester Berlin in the Berlin Philharmonic concert hall, the Deutsche Kammerakademie Neuss, the Basler Kammerorchester, the Berner Symphonie Orchester, Camerata Schweiz and performed in Gidon Kremer’s Festival “Les Muséiques” in 2005. Invitations to the Orchestre de Picardie, the Prague Chamber Orchestra and the Göttinger Sinfoniker followed.
As a musical consultant Graziella Contratto has cooperated with the film director Bettina Ehrhardt in her documentaries “Kielspur im Meer” about Luigi Nono,“We play”, a portrait of Bobby McFerrin’s friendship with Chick Corea and “wo ich noch nie war” (Helmut Lachenmann).
Between 2007 and 2013, Graziella Contratto was the artistic director of the Davos Festival – young artists in concert in Switzerland. Her original performing concepts (e.g. a conducting class for children, the Nomads‘ concerts), her choice of programs and the especially well received young composers’ workshop with resident composers Wolfgang Rihm, Deqing Wen, Frangis Ali-Zade, Andres Bosshard and Erkii Sven Tüür led to a remarkable frequentation and an enthousiastic reaction by the audience and the medias.
In 2008 Graziella Contratto created a comic-symphonic project with Ursus & Nadeschkin and the camerata Schweiz which lived to see four reprises in different Swiss tours. In July 09 she conducted Verdi’s “La Traviata” at the Opera Festival of Avenches, Switzerland and her performance was highly praised by the international press. Sinde 2004, Graziella Contratto successfully runs conducting workshops for managers and executives both nationally and internationally. She regularly participates in radio and television programmes and in 2015, as successor to Heinz Holliger and András Schiff, she will direct an edition of the music festival Ittinger Pfingstkonzerte. Since 2010, she is Head of the Department of Music at the Bern University of the Arts.
She has been awarded The Johanna Dürmüller Preis (2008), the Honor Medal oft he City of Chambéry (2009) and the Cultural Award of Central Switzerland (2015).