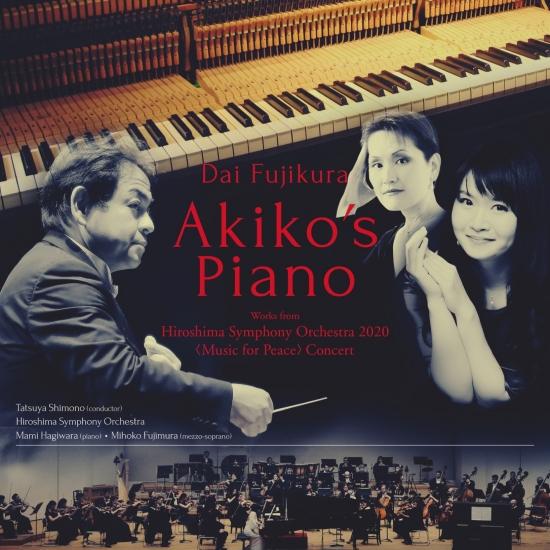 This Album is available for streaming only.

Thank you for your interest in this album. It is available for streaming only.
Get a streaming subscription to listen to this album.

Dai Fujikura’s fourth piano concerto, Akiko’s Piano, emerged from an extraordinary story that began before the atomic bomb was dropped over Hiroshima in 1945. Akiko Kawamoto was a young girl in Hiroshima who enjoyed playing her piano. She survived the atomic bomb but succumbed a day later to complications from its radiation. Akiko’s parents survived, and kept her piano in their home, where it remained untouched for almost 60 years. On August 5th, 2020, 75 years after the catastrophe, the Hiroshima Symphony Orchestra presented Fujikura’s work conducted by Tatsuya Shimono in the memorial concert “An Evening of Peace Concert.” Hiroshima native, Mami Hagiwara, performed Fujikura’s work on Akiko’s piano, which miraculously survived the atomic bomb. The soloist also shares a personal story with the instrument: In 2004, Hagiwara’s childhood piano tuner, Hiroshi Sakakibara restored the instrument, where it has been played since by Martha Argerich and Peter Serkin, among others.
Dedicated to Hiroshima Symphony’s “Peace and Music Ambassador” Martha Argerich, Fujikura's work has attracted attention even beyond the concert hall. On the 75th memorial year of the atomic bombing, the Japanese television broadcaster NHK produced a documentary drama on Akiko's Piano, which includes footage of the world premiere. Furthermore, the book "Akiko's Piano: Playing Over the A-Bomb" published in July by Iwanami Shoten dedicates a chapter to the piano concerto. “Though naturally this concerto will have ‘music for peace’ as its main message,” says composer Dai Fujikura, “as a composer I like to concentrate the personal point of view. This microscopic view to tell the universal subject, is the way to go, I feel, in my compositions: the view of Akiko's, ordinary nineteen-year-old girl who didn’t have any power over politics (and she was born in US, which means she is also an American). At the time of her death, she didn’t know what had happened, or what killed her (radiation poisoning, as she didn’t die from the initial blast). There must be similar stories to that of this nineteen-year-old girl in every war in history and in every country in the world. Every war will have had an ‘Akiko’.”
Hiroshima Symphony Orchestra
Tatsuya Shimono, conductor 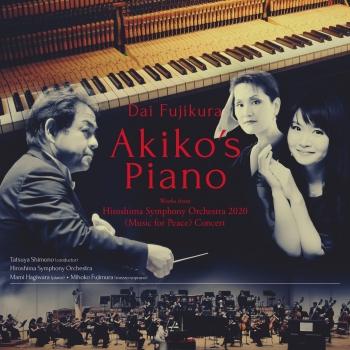 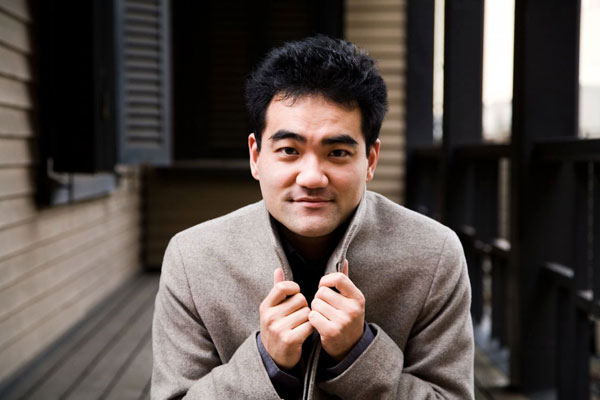 Dai Fujikura
Born in 1977 in Osaka Japan, Dai was fifteen when he moved to UK. The recipient of many composition prizes, he has received numerous international co-commissions from the Salzburg Festival, Lucerne Festival, BBC Proms, Bamberg Symphony, Chicago Symphony Orchestra, Simón Bolívar Symphony Orchestra and more. He has been Composer-in-Residence of Nagoya Philharmonic Orchestra since 2014 and held the same post at the Orchestre national d'Île-de-France in 2017/18. Dai’s first opera Solaris, co-commissioned by the Théâtre des Champs-Elysées, Opéra de Lausanne and the Opéra de Lille, had its world premiere in Paris in 2015 and has since gained a worldwide reputation. A new production of Solaris was created and performed at the Theatre Augsburg in 2018, and the opera received a subsequent staging in 2020.
In 2017, Dai received the Silver Lion Award from the Venice Biennale. In the same year, he was named the Artistic Director of the Tokyo Metropolitan Theater’s Born Creative Festival.
In 2019, his Shamisen Concerto was premiered at Mostly Mozart festival in New York Lincoln Center and there have so far been 9 performances of this work by various orchestras.
2020 sees the premiere of his fourth piano concerto Akiko’s Piano, dedicated to Hiroshima Symphony's Peace and Music Ambassador, Martha Argerich and performed as part of their "Music for Peace" project. Dai is currently composing his third opera, which will be revealed to the public in the same year.
His works are recorded by and released mainly on his own label Minabel Records in collaboration with SONY Music and his compositions are published by Ricordi Berlin.
Dai is currently focusing his attention on upcoming works including an opera on the life of Hokusai, a concerto for two orchestras, and a double concerto for flute and violin.
Dai’s works have been conducted and played by artists internationally such as Pierre Boulez, Peter Eötvös, Jonathan Nott, Martyn Brabbins, Gustavo Dudamel, Christian Arming, Alexander Liebreich, Kazuki Yamada, Kazushi Ono, Viktoria Mullova, Jean-Guihen Queyras, Claire Chase, Akiko Suwanai and Yu Kosuge.
During the 2018 season, his second opera The Gold-Bug (commissioned by the Theater Basel) was premiered and the concert version of Solaris was performed in Tokyo Metropolitan Theatre for the first time. Dai’s orchestral piece Glorious Clouds (co-commissioned by the Nagoya Philharmonic Orchestra, WDR Symphony Orchestra Cologne and Orchestre national d'Île-de-France) and his third piano concerto Impulse (co-commissioned by Orchestre Philharmonique de Monte-Carlo, Yomiuri Nippon Symphony Orchestra, and Orchestre de Suisse Romande) were also premiered this year. During the 2019 season, Dai created his first dance project, Sounding Seven Senses with dancer Koichi Omae. Aside from these premieres, Dai had two ‘Portrait Concerts’ dedicated entirely to his music at the Wigmore Hall in London and at Hakuju Hall in Tokyo.