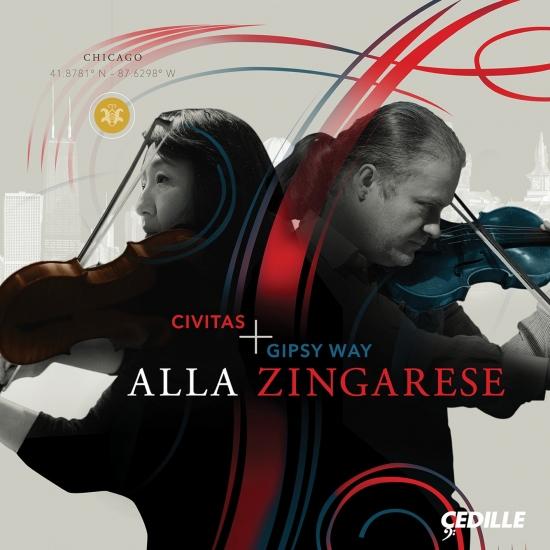 The Civitas Ensemble, an enterprising chamber group founded by Chicago Symphony Orchestra musicians, teams up with Czech violin virtuoso Pavel Šporcl and his wildly popular Gipsy Way Ensemble for a groundbreaking collaboration at the crossroads of Western classical and Romani musical traditions.
Alla Zingarese (“in the Gypsy style”) embraces the past with new arrangements of well-loved, Gypsy-infused works by Brahms, Enescu, Hubay, and Sarasate, while celebrating the present with new music by noted Czech composer Lukáš Sommer, written for the combined forces of Civitas’s violin, clarinet, cello, and piano and Gipsy Way’s violin, viola, string bass, and cymbalom (hammered dulcimer), plus a Sommer piece dedicated exclusively to Civitas. All the arrangements and Sommer’s two original compositions are world-premiere recordings. Highlights include Šporcl’s new version of his own Gipsy Fire, the title track from an earlier, best-selling Gipsy Way album.
Alla Zingarese marks the Civitas Ensemble’s recording debut and the Cedille label debut for Gipsy Way. Years in the planning, the project is the outgrowth of the enduring friendship between Šporcl and Civitas violinist Yuan-Qing Yu dating back to their student days. Civitas and Gipsy Way recorded the album after premiering the program at packed concert halls in Prague and Chicago. The Chicago Tribune found it “unique” and “exhilarating.” Chicago on the Aisle called it “a trip through musical history . . . and a venture into new musical territory with surprises aplenty.”
Civitas Ensemble
Pavel Šporcl, violin 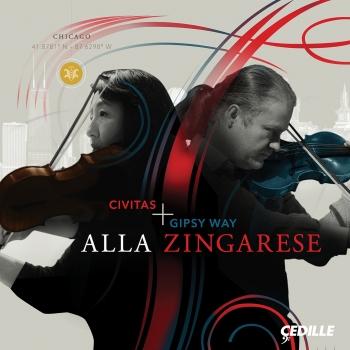 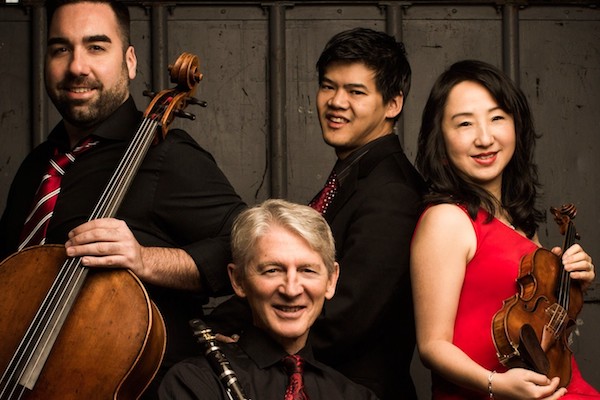 Civitas Ensemble
In 2011, four of Chicago’s top musicians — Yuan-Qing Yu, Kenneth Olsen, Winston Choi, and Lawrie Bloom — joined forces to found Civitas Ensemble, a chamber music group dedicated to presenting engaging live performances of new and traditional works, inspiring a young generation of classical musicians, and bringing the healing power of music to those with limited access to live performances.
What make Civitas unique is its artistic excellence, its cross-disciplinary programming, its daring presentation of both old and new works, its connection with living composers, its international reach, and its robust outreach program. Civitas has presented many interdisciplinary programs such as showcasing Ravel and Poulenc’s music with French posters by Lautrec and Chéret, and has commissioned and premiered numerous pieces by living composers. The Ensemble is regularly invited to perform at prestigious venues such as Chicago’s Art Institute, Symphony Center, and WFMT.
As an advocate of music education, Civitas offers free tickets to all current students, free masterclasses to several Chicago Public Schools, and serves as the Ensemble-in-Residence at Valparaiso University in Indiana, where it gives three public chamber music concerts and six coaching sessions annually.
Praised for the quality of its performances, its innovative programming, and its community engagement efforts, Civitas Ensemble was invited to perform with Yo-Yo Ma at the Chicago Humanities Festival and participate in a panel discussion on the topic of “Artist and Citizenship.” Since its inception, Civitas has performed over 40 outreach concerts for hospitals and senior living facilities across Chicagoland and in other major cities while on tour. Civitas receives rave reviews from the Chicago Tribune, Chicago Classical Review, and Chicago on the Aisle for its artistic excellence and its devotion to the community.