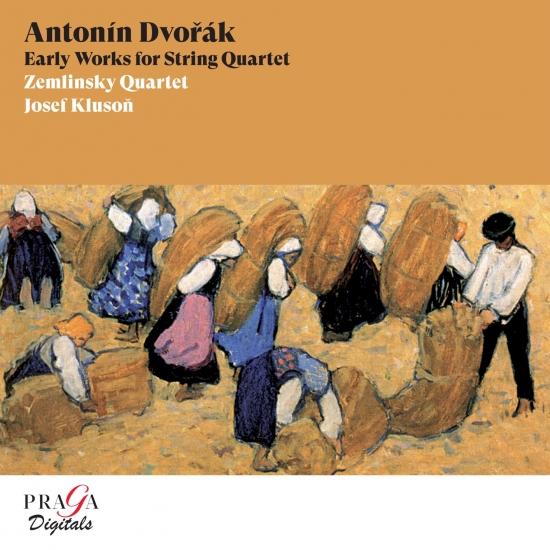 The Czech Zemlinsky Quartet, which attended master classes by Vaclàv Bernašek (Kocian Quartet), Josef Klusoň (Pražàk) and Walter Levine (LaSalle), proposes the first recording of Dvořák’s youthful works for quartet (1862-74) taking into account the cuts made in the critical edition (Supraphon-Bärenreiter). Consequently, the works are better suited to concert performance and show off to best advantage the spontaneity and richness of their inexhaustible melodic inspiration, ‘apprentice works’ that prefigure the universality of the future ‘American’ Quartet of 1893.
When Antonin Dvorák learned to compose, he did it the old-fashioned way -- by composing. Although he had written numerous shorter works earlier, the 20-year-old Bohemian bestowed his Opus 1 on a three-movement String Quintet in A minor for pairs of violins and violas plus cello in 1861. The next year, he turned out his Opus 2, a four-movement String Quartet in A major, and over the next 12 years, he wrote six more string quartets. Through them, the listener can follow Dvorák's progress from a talented amateur with an inexhaustible gift for melody and little feel for form to an almost-ready-for-the-big-time composer who'd learned to tighten his structures and control his gift for melody. With this four-disc set by the Czech Zemlinsky Quartet (augmented by violist Josef Kluson in the quintet), following Dvorák's development has never been easier. With its warm tone, graceful ensemble, and innate sense of rhythm, the Zemlinsky contains Dvorák's sometimes sprawling forms, restrains his sometimes interminable modulations, and always lets the melodies sing. While these quartets are by no means in the same class as the composer's later works in the same form, listeners who want to find out how Dvorák became Dvorák may want to seek them out. Praga's 2006 digital sound is a bit reserved, but clean and detailed.
Josef Kluson, viola
Zemlinsky Quartet
Digitally remastered 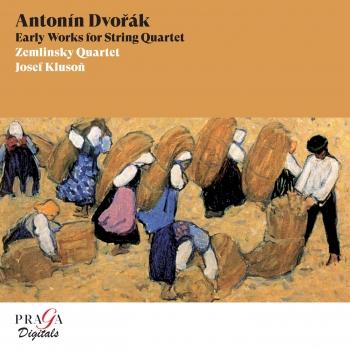 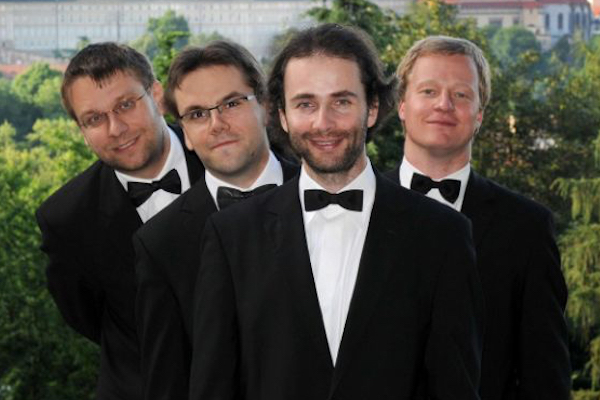 Zemlinsky Quartet
Founded in 1994 while the members were still students, the ZEMLINSKY QUARTET has become a much lauded example of the Czech string quartet tradition. The Zemlinsky Quartet won the First Grand Prize at the Bordeaux International String Quartet Competition in 2010. They have also been awarded top prizes at the Banff International String Quartet Competition (2007), Prague Spring International Music Competition (2005) and London International String Quartet Competition (2006), where they also received the Audience Prize. The Quartet was recipient of the Alexander Zemlinsky Advancement Award in 2008. Other notable prizes include Beethoven International Competition (1999), New Talent Bratislava (2003), Martinů Foundation String Quartet Competition (2004), and the Prize of Czech Chamber Music Society (2005). In the season 2016/17, Zemlinsky Quartet was appointed as the residential ensemble of the Czech Chamber Music Society.
While students at the Prague Conservatory and the Academy of Performing Arts Prague, the ensemble was coached by members of renowned Czech string quartets including the Talich, Prague, Kocian and Pražák Quartets. The ensemble also took part in several master classes including ProQuartet, in France and Sommerakademie in Reichenau, Austria where they were awarded First Prize for the best interpretation of a work by Janáček. From 2005 to 2008, the quartet studied with Walter Levin, the first violinist of LaSalle Quartet. Their recent mentor has been Josef Klusoň, the violist of the Pražák Quartet.
Zemlinsky Quartet is named after the Austrian composer, conductor and teacher Alexander Zemlinsky (1871-1942), whose enormous contribution to Czech, German and Jewish culture during his 16-year residence in Prague had been underrated until recently. His four string quartets (the second one being dedicated to his student and brother-in-law Arnold Schönberg) belong to the basic repertoire of the ensemble. Since 2005, the quartet has maintained a special relationship with the Alexander Zemlinsky Foundation in Vienna.
The Zemlinsky Quartet performs regularly in the Czech Republic and abroad (Germany, Switzerland, Austria, France, Monaco, Luxembourg, Spain, Italy, Belgium, Great Britain, Ireland, Hungary, Slovakia, Bulgaria, Canada, USA, Brazil, Japan, South Korea). Recent major appearances of the Zemlinsky Quartet include London’s Wigmore Hall, Cité de la Musique in Paris, Library of Congress, Place des Arts in Montreal, Prague Spring Festival, and their New York debut on Schneider/New School Concerts Series.
Their vast repertoire contains more than 200 works ranging from Mozart, Beethoven, Brahms, and Dvorak to works by contemporary composers. The members of the ensemble also perform as soloists and are individual prize-winners of several competitions (Concertino Praga, Spohr International Competition Weimar, Tribune of Young Artists UNESCO, Rotary Music Competition Nürnberg,Beethoven International Competition, Kocian International Competition).
Between 2006-2011, the Zemlinsky Quartet were Assistant Quartet-in-Residence at Musikakademie Basel in Switzerland. Music education is an important part of their professional life and during their tours, the quartet is often invited to give master classes to students of any age. They also perform educational concerts for students. Recently, František Souček and Petr Holman have been appointed Professors at the Prague Conservatory.