I'm on My Way Georgina Peach & The Savoys 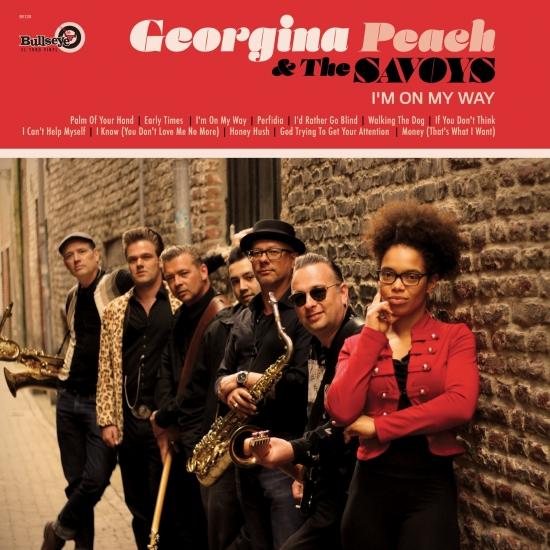 Info for I'm on My Way

It was a cold and rainy evening early 2018, when the Savoys sat down at the bar moments before their gig. They where all slightly depressed, because they had just split with their singer, who they were supposed to perform with that night. While a pretty lady was pouring the beer, the owner of the venue -Pe Lammers, thank you!- told the guys: "Hey, my barmaid has a real good voice, she never stops singing along with our playlist.. Why not try something together with her tonight?!"
Not much later the girl was onstage, singing her heart out on Etta James' classic "I'd Rather Go Blind", and the band -as well as the 15 people crowd- where blown away by the talent. There was something about her voice and performance, that seemed to have been waiting to get out for a long time.. and this obviously was the moment.
Only few weeks later Cheri “Georgina Peach” Addo did her very first live gig ever, backed with the Savoys. They played a full set at Paradiso in Amsterdam and the crowd went wild and screamed for encore! Ever since then the band is skyrocketing with shows and festivals all over Europe. And everywhere people seem to fall in love with the beautiful singer and her wild & jumpin' backing band.
Pretty soon after the first gig a recording session was scheduled, the album "I'm On My Way" is planned to be released on El Toro Records in Januari 2019. The repertoire consists of early soul, gospel and rhythm 'n blues songs. Some well known classics, some obscure gems.
Georgina Peach and the Savoys.. they are "on their way and will never turn back!"
Cheri “Georgina Peach” Addo, vocals
Jerome van Gasteren, guitar
Roy Raaijemakers, piano, organ
Evert Hoedt, tenor & baritone saxophone
Mikkel v/d Meulen, tenor & baritone saxophone
Martin Ubaghs, bass
Darryl Ciggaar, drums