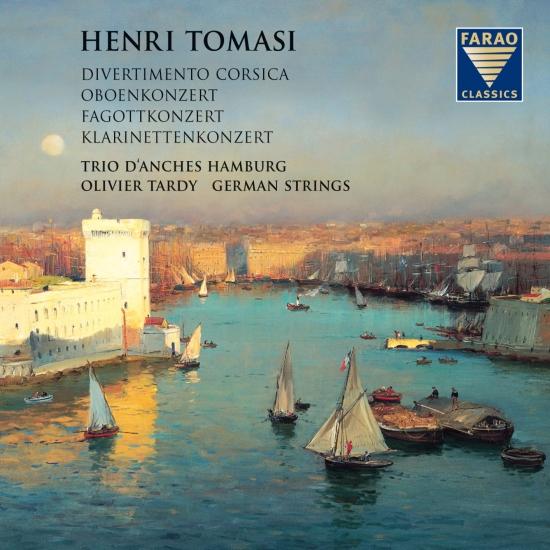 Henri Tomasi’s international breakthrough as a composer did not come until after the second world war, although in his native France he had had tremendous success with such works as “Cyrnos”, “Vocero” and “Tam Tam”, placing himself in the front row of the greatest French composers of the day. He had a special affinity for the theatre, and thus he wrote a total of twelve operas, including “Don Juan de Manara”, “L’Atlantide” and “Sampierro Corso”. Tomasi’s second passion for was instrumental music, and he especially favoured wind instruments. In cooperation with the most eminent soloists of the twentieth century, Francescatti, Navarra, Mule, André, Rampal, Presti-Lagoya and Erlih among them, he composed twenty concertos.
Two of the three concertos presented on this CD (for clarinet and bassoon) were commissioned by the Paris Conservatoire as entry audition pieces. The third concerto (for oboe) which was written at the same time as the ballet “Jabadao”, is based on the same musical material and moulds this into traditional concert form. The beginning of the oboe concerto is reminiscent of a “Vocero”, which is a ceremony performed for the deceased, in which a woman who was professional mourner would declaim dirges and songs of lament. The “Divertimento Corsica” comes across as a small conglomeration of Corsican dances and melodies. In four scenes, full of atmosphere, Tomasi tells us of his beloved island home.
The four works do not as yet form part of current theatre repertoire, so they are a treasure trove for collectors of rare music! And: this album is actually filling a loophole in the repertoire! This is the first time ever that the oboe concerto has been issued on a recording.
Trio d’anches Hamburg, oboe, bassoon, clarinet
German Strings, string orchestra
Olivier Tardy, conductor 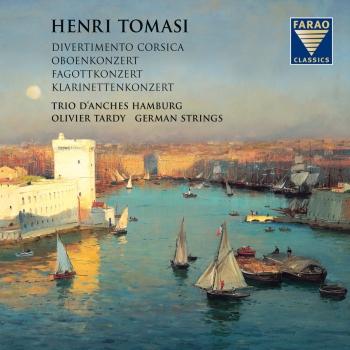 Trio d’anches Hamburg
comprises three principal wind players from the Hamburg State Philharmonic Orchestra: Rupert Wachter (clarinet), Christian Kunert (bassoon) and Nicolas Thiébaud (Oboe). They come together to play woodwind music by Haydn, Mo- zart, Tomasi, Poulenc and Françaix, among others. The name of their trio, Trio d’anches (Trio of reeds) comes from the instrumentation of clarinet, oboe and bassoon. These instruments use a reed (the French word for which is anche) to produce their sound.
The members of the string orchestra German Strings are concertmasters, section leaders, and rank-and-file players from important German orchestras. In addition to their work in opera and symphony orchestras, it is with the greatest of pleasure they devote themselves the intimate sound and special colour of the string orchestra and exploring its immense repertoire.
Olivier Tardy, principal flautist of the Bavarian State Orchestra stated a second career a few years ago as a conductor. An important element of Olivier Tardy’s career so far has been his commitment to working with young people. He was the first conductor of the Ba- varian State Orchestra’s youth orchestra which was founded in 2007, and in addition to this he conducted the Munich University Abaco-Orchestra for five years. In 2009 at the invitation of Brigitte Fassbaender he conducted the Youth Orchestra at the Richard Strauss Festival in Garmisch-Partenkirchen.