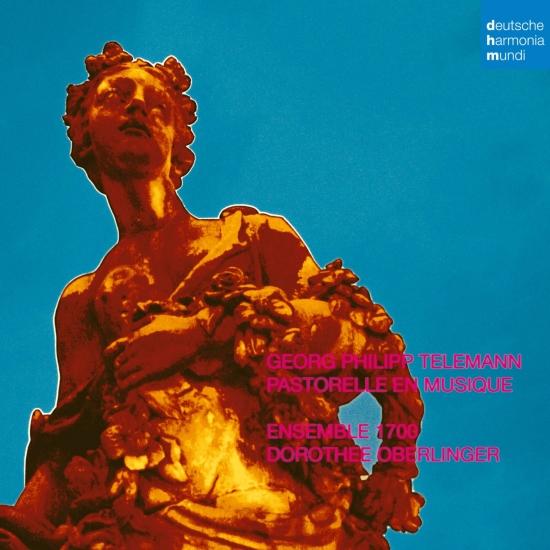 "A sparkling tableau full of musical beauties," was the enthusiastic review of Telemann's "Pastorelle en musique" after its performance by Ensemble 1700 under Dorothee Oberlinger at the Potsdam Sanssouci Music Festival in June 2021. For the accompanying recording of Georg Philipp Telemann's 1717 work, Dorothee Oberlinger and her Ensemble 1700 are collaborating with the Vocal Consort Berlin and the equally highly acclaimed soloists Lydia Teuscher, Marie Lys, Alois Mühlbacher, Florian Götz and Virgil Hartinger. Telemann's "Pastorelle en musique" is most likely the earliest complete musico-dramatic work by Telemann and a fascinating, festive work full of wit and melodic colour, which focuses on the emotional turmoil of young people, their conflicts and longings around the themes of commitment, freedom and passion. All the more astonishing that this musical gem has only been recorded once so far. And it is a stroke of luck that it has been rediscovered at all and is now available in an outstanding recording conducted by Dorothee Oberlinger, since it disappeared in the Ukraine after the Second World War until 2002. Telemann's "Pastorelle" is a pastoral play and comes with Italian arias like "Regne, amour, sur mon âme", French airs like "Vos rigueurs, mon enfant" and almost cheeky, rhythmic choral tableaux like "Das süsse Lieben nach Wunsch zu üben / Aimons sans cesse" or "Lasst uns Liebesrosen brechen". It sometimes recalls Vivaldi, sometimes Corelli, and likewise draws on Molière and Lully. At last it is available in a new reference recording under Dorothee Oberlinger, who conducts this wonderful and varied music sensitively, with ease and finesse - and of course also plays the recorder.
Lydia Teuscher, soprano (Caliste)
Maria Lys, soprano (Iris)
Alois Mühlbacher, alto (Amyntas)
Florian Götz, baritone (Damon)
Virgil Hartinger, tenor (Knirfix)
Vocal Consort Berlin
Ensemble 1700
Dorothee Oberlinger,direction 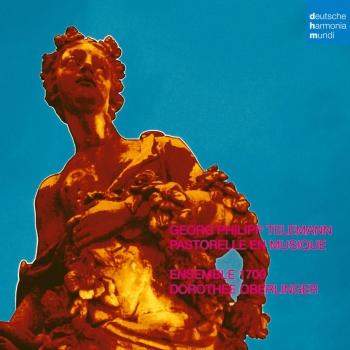 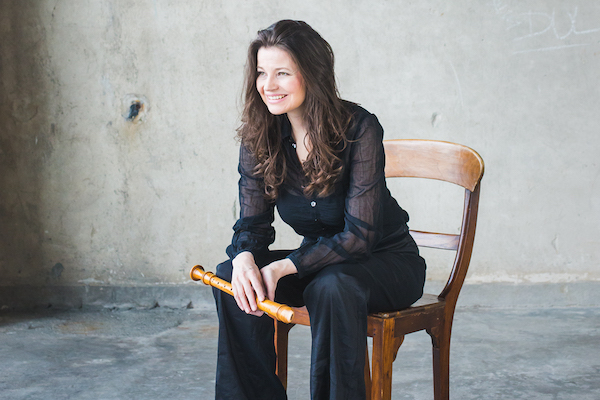 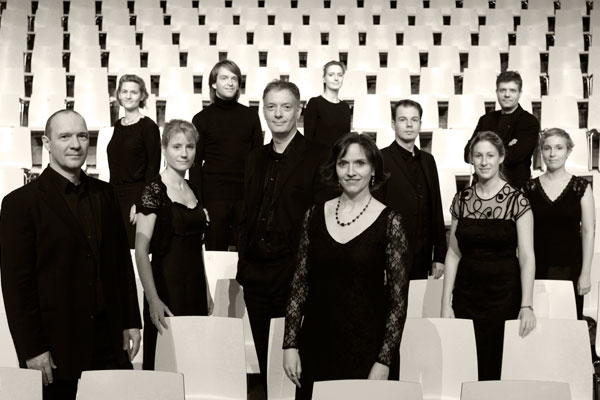 Ensemble 1700
was established by Dorothee Oberlinger in Cologne in 2002 and focuses on European chamber music from the 17th and 18th centuries. Its basis in musicology and awareness of performance practice, coupled with the highest technical expertise, has resulted in a wide range of lively concert performances that have been enthusiastically received by press and public alike. Guest appearances in leading venues, including the Konzerthaus in Vienna and the Philharmonie in Cologne, and at important European music festivals, such as the Tage Alter Musik in Herne and the Resonanzen festival in Vienna have been highly successful and have consolidated the young ensemble’s reputation. To complement the regular line-up, Dorothee Oberlinger has increasingly invited famous specialists to guest on concert and recording projects. For this CD, Dorothee Oberlinger asked Baroque specialist Reinhard Goebel to direct the ensemble.
Vocalconsort Berlin
is one of the most highly regarded and versatile choirs in Germany. In 2013 it was awarded the ECHO Klassik. Founded in 2003 and thus the youngest of Berlin’s three professional choirs, Vocalconsort has no principal conductor, working instead on a project-by-project basis with various conductors, and above all with long-term artistic partners such as Daniel Reuss, Folkert Uhde and Sasha Waltz. Along with the Compagnie Sasha Waltz & Guests and the Akademie für Alte Musik Berlin, it is one of the three „residence ensembles“ at Radialsystem V, Berlin’s innovative concert venue.
Vocalconsort Berlin is versatile in both instrumentation and repertoire, but always stylistically confident and of impressive homogeneity. It has enjoyed success in a wide variety of fields: from Monteverdi’s „L’Orfeo“ under René Jacobs at the Innsbruck Festival, Haydn’s „Four Seasons“ under Christopher Moulds in Rotterdam, Bernstein’s „A Quiet Place“ under Kent Nagano and through to Peter Ruzicka’s „Inseln, Randlos“ under the direction of the composer himself. Vocalconsort Berlin supported the opera choir on stage in Barrie Kosky’s production in Schönberg’s „Moses und Aron“ under Vladimir Jurowski. The choir has also played an important role in many successful scenic productions by Sasha Waltz & Guests, such as „Dido & Aenes“ by Purcell, „L’Orfeo“ by Monteverdi, „Medea“ by Dusapin and „Matsukaze“ by Hosokawa.
CD recordings include Handel’s „Ode for Queen Anne“ and „Dixit Dominus“ with Andreas Scholl and the Akademie für Alte Musik Berlin, Handel’s „Athalia“ with Nuria Real and the Kammerorchester Basel as well as Bach’s motets under Marcus Creed. Vocalconsort Berlin received the ECHO Klassik in 2013 for its recording of Gesualdo’s second book „Sacrae Cantiones“ under James Wood.
In its own projects Vocalconsort Berlin likes to transcend the boundaries of classical genres and disciplines: „Allegory of Desire“ was created in collaboration with the Belgian ensemble Zefiro Torna and the Tunisian singer Ghalia Benali; „From Inside“ combined works by Gesualdo and Giacinto Scelsi in a concert staged by Hans-Werner Kroesinger; „Libera Me“ combines music by Lobo, Desprez and Gesualdo with contemporary dance.
In recent years the collaboration with the Konzerthausorchester under the direction of Iván Fischer has intensified, for example with performances of the St. Matthew Passion and the Mass in B minor by Bach or the Requiem by W.A. Mozart.
In the 2017/18 season, Vocalconsort Berlin made its debut with the Berliner Philharmoniker under Sir Simon Rattle in a semi-staged production of Janacek’s „Schlauen Füchslein“ (Cunning Little Vixen), which was directed by Peter Sellars.
Also the collaboration with the Komische Oper Berlin under the direction of Barrie Kosky has intensified within the last years. Vocalconsort Berlin was involved in productions such as Bernstein’s “Westside Story”, Mozart’s “Zauberflöte” or “L’enfant et les sortilèges” by Ravel. On occasion of the 2019 Salzburg Festival Vocalconsort Berlin participated in “Orphée aux Enfers” by Offenbach, a highly acclaimed production of Barrie Kosky with the Vienna Philharmonic under Enrique Mazzola.
Vocalconsort Berlin maintains a regular presence in the music metropolises and at the major festivals in Europe, from Amsterdam to Barcelona, from London to Vienna, from Paris to Salzburg. It has worked with conductors such as Marcus Creed, Jos van Immerseel, Ottavio Dantone, Christoph Rousset, Pablo Heras-Casado and Peter Ruzicka.
Dorothee Oberlinger
is one of the most amazing discoveries of recent years, an expressive virtuoso who has received numerous awards. Today she is seen as one of the best recorder-players in the world. Her concerts have been received with enthusiasm by critics and audiences alike, earning her unanimous acclaim. Her CDs are regularly fêted as the best new issues on the market.
Dorothee Oberlinger has given solo recitals at festivals all over Europe, in America and Japan at some of the most prestigious venues such as the Ludwigsburger Schlossfestspiele, the Musikfestspiele Potsdam, the Settimane Musicale Stresa, the Nederlandse Oude-Musik-Network, the Festival de Musica Antigua Sajazarra, the Warsaw Beethoven Festival, the Europäische Musikfestwoche Passau, the Rheingau-Musikfestival, the Tage der Alten Musik Regensburg and the MDR-Musiksommer. Other venues in which she has played include the Wigmore Hall in London, the National Philharmonie in Warsaw, the Marianischer Saal in Lucerne, the Rosée Theater in Fuji and the Philharmonie in Cologne.
She has been the guest soloist with leading international Baroque ensembles such as London Baroque and Musica Antiqua Köln directed by Reinhard Goebel, and she also plays regularly with modern symphony orchestras such as the WDR-Rundfunk-Sinfonieorchester and the Detmolder Kammerorchester.
Dorothee Oberlinger collaborates with the top Italian ensemble "Sonatori de la Gioiosa Marca", with whom she has given many concerts throughout Europe. Their joint CD of concertos by Antonio Vivaldi has received numerous awards from the international musical press.
She directs her own "Ensemble 1700", which she formed in 2003. Together they have realized a wide variety of projects relating to the music of the 17th and 18th centuries. In 2004 Dorothee Oberlinger was appointed professor at the renowned Mozarteum academy in Salzburg.