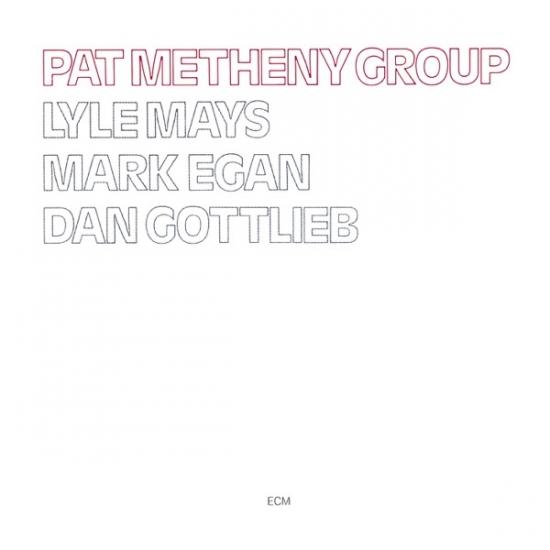 Info for (aka “The White Album”) Pat Metheny Group (Remastered)

When the Pat Metheny Group released this debut album on ECM in 1978, the musicianship of Pat was already beginning to turn some heads. His previous trio album for ECM in 1976, featuring Jaco Pastoris (bass) and Bob Moses (drums), had forced the world of traditional jazz to take notice of this contemporary sound. There is not a drab track on this album, and Metheny is joined by an entirely new lineup of musicians: Lyle May, Mark Egan, and Dan Gottlieb. The group really brought new life into the genre.
This album solidified Metheny’s place as a gifted composer with an outstanding mastery of his guitar-craft. This is certainly one of the most important contemporary jazz albums ever released.”
There’s no mistaking a Pat Metheny album, and along with running mates Lyle Mays, Mark Egan, and Dan Gottlieb, the experience is unforgettable. From its inaugural moments, the group’s self-titled debut overflows with radiance. Ironically, this was one of the last PMG albums to cross my ears. During my first listen, the seamless combination of guitar and keyboard on “San Lorenzo” in its original guise was enough to show what I’d been missing, for clearly it had already kicked up the ECM ethos up a notch or two. This quiet revelation is further enhanced by the synth lead, gently skating its way across a surface that glitters with an artfully placed autoharp (which presages the sound of Metheny’s Pikasso guitar). Egan’s weighty but smooth bass works magic through the unmistakable lyricism of Mays’s pianism as both are swept favorably along by Gottlieb’s foamy breakers. And there is Metheny himself, whose own waves scorch the shorelines of our expectations with fragrant sunset. There is much to be found here in the way of timeless material, such as “Phase Dance,” another formative cell of the PMG canon. Buoyed by a seesawing bass, effortless soloing from Metheny and Mays scintillates over tight drumming. The wide open spaces of “Jaco,” named for the bassist and early collaborator Jaco Pastorius, veer our attention to a savvy and vigorous funk from which Metheny spins his web with both the grace of a ballerina and the raw emotive power of a blues guitarist. The following tune, “Aprilwind,” is as elegiac as the previous is jubilant. This solo guitar lozenge, wrapped in bittersweet introspection, proves a brief medicinal corrective to the positively acrobatic “April Joy.” A dream within a dream, it awakens our senses to a life renewed. But perhaps none is more uplifting than “Lone Jack,” in which an upbeat narrative flair and superb ground line make for a perfect sling with which to hurtle Metheny’s flames for one arousing final lap around the firmament.
Metheny’s sound has a bright and fluid posture that never fails to work its way into our hearts. No matter what mood we are in before pressing PLAY, we can always be sure of finishing with a smile. This is life-affirming music that stays true to itself no matter what the weather. One sometimes speaks of “desert island discs”—i.e., albums that are indispensable in our listening lives. This is beyond that, for once we hear it we have it with us always.
Pat Metheny, 6- and 12-string guitar
Lyle Mays, piano, synthesizer, autoharp
Mark Egan, bass
Dan Gottlieb, drums
Recorded January 1978 at Talent Studio, Oslo
Engineer: Jan Erik Kongshaug
Produced by Manfred Eicher
Digitally remastered by Christoph Stickel

Booklet for (aka “The White Album”) Pat Metheny Group (Remastered)