"To the best of my knowledge, a 1969 single on A&M was all that was heard from Ralph Graham prior to his signing with Sussex in late 1973 and, despite this fine album for the label and a further pair on RCA, by the end of the seventies, Ralph's name had disappeared from the record labels except with regard to writing credits. Doug Kinan, Ralph's manager at the time, contributed this to the album's back cover: "We won't kid you - this is not an album that has sold one million copies before it hit the stands, nor is Ralph Graham an artist who has been labelled a 'star' before his time has happened. Everyone has worked long and hard to get this out to you and only you can give is a true measure of where Ralph Graham is going as a singer and writer of songs... Please, let us invite you to listen 'differently' to Ralph Graham." The 'everyone' who 'worked long and hard' included the production crews of Terry Woodford and Clayton Ivey, responsible for six tracks laid down at Broadway Sound Studios in Sheffield, Alabama, and Jimmy Briggs, whose four tracks are shared between New York and Hollywood, California.
Ralph Graham wrote or co-wrote eight of the ten tracks here, including having sole input to the opening title cut, which we featured in these pages as a stand-alone track back in issue #6. At the time, I said: "I remember when I first heard this and was totally gobsmacked. The combination of this man's beautiful voice, the self-penned lyrics and melody was just awesome." That reaction stays the same with every play, as Ralph performs his ballad in brilliantly understated fashion. (Other artists who have subsequently recorded the song include Thelma Houston, Freddie North and Al Wilson.) The mood lightens just a little for the harp-intro'd 'What Do I Have To Do' and the Woodford/Ivey team give way to co-writer Johnny Briggs, who brings in some backing vocals for the beat-ballad which has a touch of the Bacharach & David's about it in places. Again it's a fine song and the debut 45 from the album. Knowing a good song when they hear it, 5th Dimension and O. C. Smith also recorded Graham's "I Don't Know How To Look For Love', a gentle floater with some occasional changes of tempo and a catchy hook. The backing voices are kept well back in this low-key treatment - Woodford/Ivey again. 'Ain't no Need' and 'My Love Goes With You' were supervised by Jimmy Briggs, whose own 'Ain't No Need' raises the tempo and the force of Ralph's vocals as he offers up a rippling dancer just a tad above mid-tempo. A rather mournful sounding orchestra opens up 'My Love Goes With You' and indeed it is something of a sombre ballad as Ralph sings "...I can see that you're not happy here, I can see that the end is near...". The relationship is coming to an end but not of his volition, as he tells his sad tale over five minutes-18 of sadness. The song found its way to the b-side of that debut 45.
Side two opens with the second Sussex 45, 'I Don't Want To Play This Game', picked up by Bill Coday on Epic a couple of years later. A commercial, up-tempo funker with a slight country tinge and some tongue-in-cheek lyrics regarding a woman's infidelity, remarkably neither artist met with chart success via the number. Unassisted by Graham, Messrs Woodford and Ivey penned 'I See Some One New In Your Future', a complex number which starts easily before picking up both tempo and guts, gathering instruments along the way and carrying a hook solely by way of the title line. 'Got To Find Somebody', another of Ralph's own songs, finds things easing a little on the tempo as his forceful vocals are abetted by a funky background of horns and drums, sweetened by strings and a real southern-style organ popping up back in the mix. Jimmy Brigg' only contribution to side two comes on 'Let Me Love You', where he acts as both producer and co-writer. A string swirl opens the track, turning into an easy-floater over a gently orchestrated back-up and a song that nicely complemented '...Game' when paired on single. (Just the two were taken from the album and, amazingly, the title track was overlooked.) This fine album goes out with 'Stay On The Good Side', a cautionary tale as Ralph tells of the advice given him by his mother over gritty southern backing, full of brass and something of a swamp style. Reflecting the tones of the set, although the front cover shows our man with a smile on his face, the back cover close-up finds tears coming from his eyes. Wonder what happened to Ralph Graham post RCA?" (David Cole)
Ralph Graham, vocals
Digitally remastered 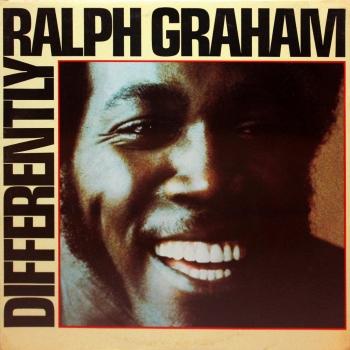 Ralph Graham
The history of Soul Music over the past 40 years is full of stories of talented artists like Ralph Graham having brief moments of popularity, but never reaching the level of success to make a lifelong career of music. Fortunately, there are stories of second chances where talent ultimately found an audience, and that is the developing story of Ralph Graham.
Known more as a songwriter than as a singer, Graham had three moderately successful albums on RCA in the early 70s. However, other artists, from Thelma Houston to Patti LaBelle found meaning in the subtle melodies and deep, introspective lyrics of Graham's work, with a half dozen artists covering his biggest song, "Differently." Unfortunately, tragedy struck Graham's family, as the death of his wife led him to give up the music business to raise his children. That appeared to be the last we'd hear of Ralph Graham.
Buoyed by friends and fans, after a 15 year absence, Graham returned to music. He began again playing various nightclubs in New England over the course of the last few years, and has since started to write and record again. The initial result of this work is the limited release of Differently... still. Differently...still is a mixed bag of 10 tunes, ranging from remixes of two of Graham's 70s songs ("Differently" and "Song About Nothin"), covers of a number of standard pop ballads (such as "You Are So Beautiful" and "Long And Winding Road"), some jazz vocal standards ("Fly Me To The Moon" and "All The Way") and two new Graham compositions ("If I Should Lose You" and "Life In The Game of Love").
The first impression left by Differently...still is that Graham's voice is clearer and fuller than ever. The jazz cuts sound wonderful and he does the best he can with the less than steller arrangements of the pop ballads (the canned background music gives them a karaoke feel). But the highlights are his new tunes, especially "If I Should Lose You," an emotional love song that has become one of my favorite songs of 2003. It makes me long to hear an entire album of Graham originals, which I hope is on its way in the future. It also leads me to want to hear him in concert (come to Detroit, Ralph!. Here's hoping that Differently...still is the beginning of a second recording career for Ralph Graham. (Chris Rizik)