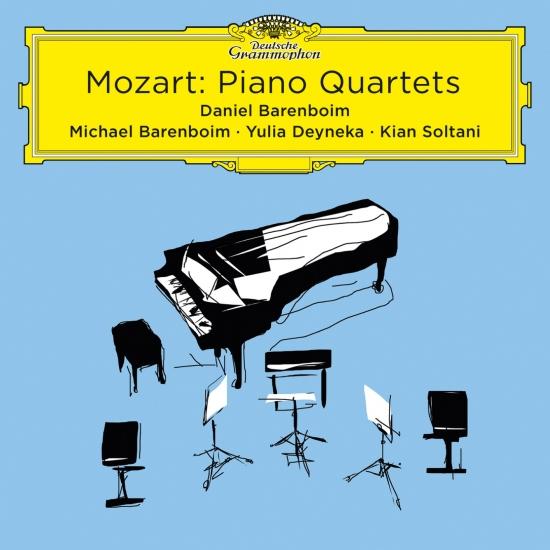 Four outstanding musicians recently joined forces in Berlin’s Pierre Boulez Saal to record Mozart’s Piano Quartets Nos.1 and 2. The live album, set for release by Deutsche Grammophon/Universal Music Canada, the country’s leading music company on August 10, features the unique talents of two of the label’s exclusive artists – Daniel Barenboim and cellist Kian Soltani – as well as those of violinist Michael Barenboim and viola-player Yulia Deyneka. Together the four musicians explore this pair of masterpieces from Mozart’s chamber repertoire, focusing on the conversational aspect of the music and creating performances brimming with excitement and vibrancy. Summer 2018 also sees the release of Barenboim’s new readings of the four Brahms Symphonies, recorded with the Staatskapelle Berlin.
Of all the many treasures to be found in Mozart’s catalogue, his chamber works are particular gems. This is especially true of his two piano quartets – No.1 in G minor, K478 and No.2 in E flat major, K493 – which he composed between 1785 and 1786, essentially creating an entirely new genre in the process. As a pianist, Barenboim has been engaging with the composer’s idiom since childhood, and it was with Mozart that he made his conducting debut in London. Now his latest release reveals his mature interpretations of these two masterpieces in live recordings that capture all the subtlety and dynamism of his pianism.
For this intimate exploration of Mozart’s chamber music, Barenboim is joined by his violinist son Michael, viola-player Yulia Deyneka and cellist Kian Soltani on cello – three young colleagues with whom he has already collaborated on many projects. Michael Barenboim has been leader of the West-Eastern Divan Orchestra since 2003, working closely with his father in one of the latter’s most important musical initiatives. Russian viola-player Yulia Deyneka has been a member of the same orchestra for over a decade. She is also principal viola of the Staatskapelle Berlin, teaches at the Barenboim-Said Academy and, since 2016, has been a member of the Boulez Ensemble, resident at the Pierre Boulez Saal. Completing the quartet of players is Kian Soltani, the multi-award-winning young cellist whose debut DG album, Home, was released last February. Soltani is principal cellist of the West-Eastern Divan Orchestra and will be appearing with Barenboim and the orchestra as soloist again in November 2018 for live performances of Richard Strauss’s Don Quixote.
Mozart’s unique genius is apparent throughout his two piano quartets. Notable for their colourful melodic and harmonic writing, these works radiate a sense of immediacy and spontaneity. Their conversational interplay enables the individual characters of the different instruments to be heard on equal terms, whether as playmates, partners or antagonists, although the piano’s voice does at times take the lead, echoing its role as protagonist in Mozart’s concertos for the instrument.
The four players on this new recording bring the many different facets of K478 and K493 to life with enthusiasm and virtuosity. Their ensemble playing demonstrates both the sheer joy involved in performing, and the humility required on each player’s part, giving an insight into the intense and movingly intimate way in which the quartet approach Mozart’s chamber creations.
Daniel Barenboim, piano
Michael Barenboim, violin
Yulia Deyneka, viola
Kian Soltani, cello