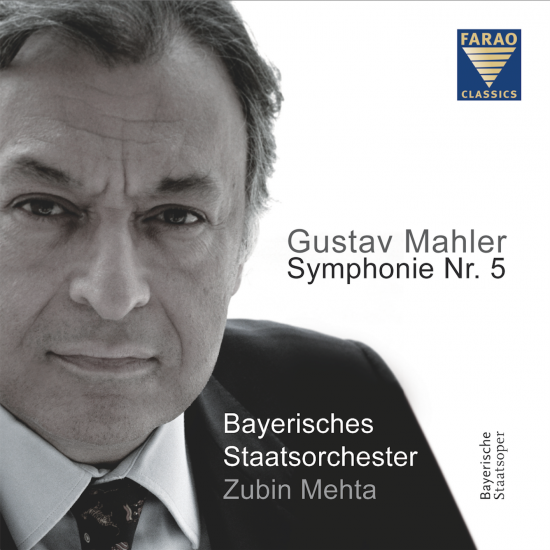 For many, the evenings featuring Gustav Mahler’s works, which Zubin Mehta conducted back in his time as musical director at the Bavarian State Opera, are an unforgettable memory.
Since then, he has regularly been returning to the conductor’s desk of the Bavarian State Orchestra, whose honorary conductor he was appointed after his resignation.
On one of those occasions, on December 15th and 16th 2008, another symphony by Mahler was performed: the 'Symphony No. 5'. The live recording of this concert documents the maestro’s moving reunion with 'his' State orchestra, as well as a great moment in music.
'…With a calmness typical of the Viennese, and with the State Orchestra on top form, Mehta strolled through the first two movements, past the apocalypse, avoiding any eccentric straining or overloading of the music. In the scherzo the blissfulness of the waltz was savoured like a dance on a volcano. Mehta manages to let Mahler sound perfectly natural – this is true artistry…' thus the Abendzeitung newspaper.
This work also poses a challenge to both audience and musicians in other respects. 'The individual parts' Mahler writes to his good friend Natalie Bauer-Lechner, 'are so hard to play that they actually require nothing but soloists. Due to my precise knowledge of orchestra and instruments, some very bold passages and movements happened to slip into the music.' Which holds true especially for the solos of course, whose first few measures for the trumpet are just as dreaded as the horn solo in the Scherzo movement, since they both have to be played without the safety net of an orchestra’s grounding.
In this recording the Bavarian State Orchestra shows its technical brilliance and the unique tradition of the tonal quality of Germany’s oldest orchestra.
'… Mehta is second to none in laying bare Mahler’s ambition to be the new Bach, delighting in ingenious counterpoint. It’s especially refreshing to hear the second movement shorn of so much angst. All this is supremely well served by one of the most wide-frequencied of Mahler recordings, in both formats – on a demonstration level with Chailly on Decca and Tilson Thomas’s San Francisco cycle.' (David Nice, BBC Music Magazine)
'… It is one of the most revelatory I have heard for many years, superior in essence to Mehta’s earlier versions from New York and Los Angeles. The playing of the Bavarian State Orchestra is of the highest international standard […] Mehta’s attention to detail in dynamics is extraordinary, imparting a deeply impressive patina of musical expression on the performance. Fine orchestral playing is one thing – phrasing, dynamics, sensitivity, virtuosity and so on – but Mehta’s view of this imperishable masterpece is quiete another matter. It goes to the very heart of the work. …' (Robert Matthew-Walker, International Record Review)
Bavarian State Orchestra
Andreas Öttl, trumpet
Johannes Dengler, corno obligato
Zubin Mehta, conductor