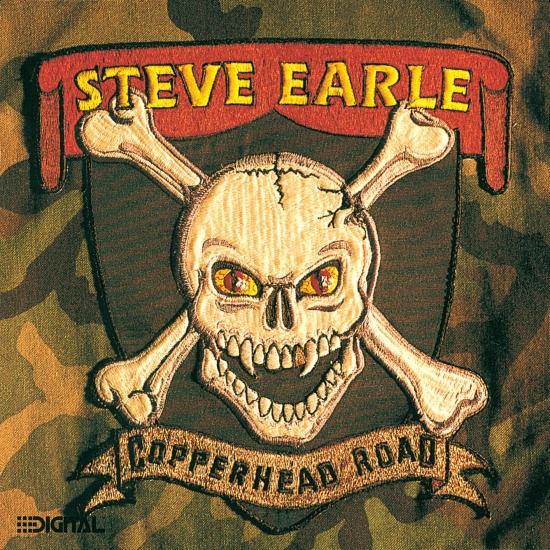 Steve Earle was on a roll in the mid-1980s; crashing onto a dilapidated country scene with his rock-influenced vitality, he turned out three classic albums in three years. His third, „Copperhead Road“, is possibly the most accomplished. Here Earle streamlines his roughneck country-rock sound for maximum impact, and hones his sociopolitical songwriting to balance perfectly with his more personal offerings. The title tune, a tale about a Vietnam-vet drug-runner, was a surprise crossover hit, widening Earle's pop profile. 'Devil's Right Hand,' another Earle signature tune, is as powerful an anti-gun song as you're likely to hear.
Earle was growing musically as well; he's backed by Irish folk-punks the Pogues on 'Johnny Come Lately,' and by bluegrass supergroup Telluride on 'Nothing But a Child,' hinting at the eclecticism of his later releases. With „Copperhead Road“ definitively proving his consistency, Earle permanently ascended into the upper echelon of American singer/songwriters, leaving the early 'country Springsteen' claims behind forever.
„Steve Earle and Nashville had had just about enough of one another once it came time for him to cut his third album in 1988. Earle's first two albums, Guitar Town and Exit 0, had sold well and earned enthusiastic reviews, but his stubborn refusal to make nice, his desire to make more rock-influenced albums, and the faint but clear Leftism in his populist lyrical stance made him no friends at MCA's Nashville offices, and his growing dependence on heroin didn't help matters one bit. Earle was moved to MCA's Los Angeles-based Uni imprint, and he headed to Memphis to cut his third album, Copperhead Road. The result improbably became one of Earle's strongest albums; between its big drum sound, arena-sized guitars, and a swagger that owed more to the Rolling Stones and Guns N' Roses than country's New Traditionalists, Copperhead Road was the unabashed rock & roll album Earle had long threatened to make, but his attitude and personality were strong enough to handle the oversized production, and the songs showed that for all the aural firepower, this was still the same down-home troublemaker from Earle's first two albums. The moonshiner's tale of the title cut, the gunfighter's saga of 'The Devil's Right Hand,' and the story of two generations of soldiers in 'Johnny Come Lately' (with the Pogues sitting in as Earle's backing band) were all tough but compelling narratives rooted in country tradition, and their rock moves updated them without robbing them of their power. And if the songs about love that dominate the album's second half don't have the same immediate impact, 'Even When I'm Blue,' 'You Belong to Me,' and 'Once You Love' are honest and absorbing reflections of the heart of this dysfunctional romantic. Copperhead Road's production, which occasionally borders on hair metal territory, dates it, but the fire of Earle's performances and the strength of the songs more than compensates, and this album still connects 20 years on: if he had been able to hold himself together and make a few more records this strong, it's hard to imagine how big a star he could have become.“ (Mark Deming, AMG)
Steve Earle, vocals, guitars, harmonica, 6-string bass, mandolin
Donny Roberts, guitars, 6-string bass
Bill Lloyd, acoustic guitar
Michael McAdam, 12-string electric guitar
Bucky Baxter, pedal steel, lap steel, Dobro
Ken Moore, synthesizer and organ
John Barlow Jarvis, piano
Kelly Looney, bass
Kurt Custer, drums
Neil MacColl, mandolin on 'Johnny Come Lately'
John Cowan, background vocals
Maria McKee, background vocals
Radney Foster, background vocals
The Pogues: on 'Johnny Come Lately'
Terry Woods, cittern
Phil Chevron, guitar, vocals
Jem Finer, banjo
James Fearnley, accordion
Spider Stacy, tin whistle, vocals
Shane MacGowan, banjo, bodhran
Darryl Hunt, bass
Andrew Ranken, drums
Telluride:on 'Nothing But A Child'
Sam Bush, mandolin
Jerry Douglas, dobro
Mark O'Connor, violin
Edgar Meyer, bass violin
Produced by Steve Earle, Tony Brown
Digitally remastered