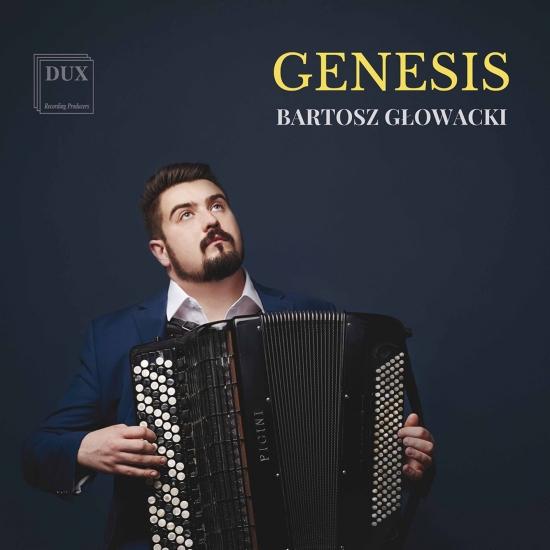 "Genesis" is the debut album from accordionist Bartosz Glowacki, containing music from various eras and styles including works by D. Scarlatti, Arvo Part, and Piazzolla.
On this disc you can listen to baroque transcriptions alongside original accordion compositions. The disc starts with Sonata in A major K.208 by Domenico Scarlatti followed by L’Egyptienne by J.P. Rameau. The composition for solo accordion The Ruined Cathedral, was written by Vaclav Trojan after the sight of the ruins of Dresden cathedral, destroyed in the 2nd World War. De profundis by Sofia Gubaidulina is one of the most significant pieces written for the accordion canon of the 20th century and refers to the opening of Psalm 130 - Out of the depths [I call to Thee, O Lord]. The performance of Pari Intervallo, by Estonian composer Arvo Part, originally written for four parts, is the first version released for solo accordion. The Double Concerto by Astor Piazzolla concludes this disc, featuring a fantastic musician Rob Luft. The blend of electric guitar and accordion with chamber orchestra with improvised melodic ornaments is a homage to Nuevo Tango style in classical form of a concerto.
Bartosz Glowacki was awarded the Polish Young Musician of the Year in 2009 and represented Poland at the Eurovision for Young Musicians competition in Vienna. He has performed as a soloist at the Wigmore Hall, the Royal Festival Hall, the Barbican and the Royal Albert Hall. Glowacki founded the Deco Ensemble and has worked with renowned artists such as Trevor Pinnock and Nigel Kennedy and plays regularly with the London Symphony Orchestra, the Royal Philharmonic Orchestra, London Sinfonietta to name a few.
Bartosz Glowacki, accordion 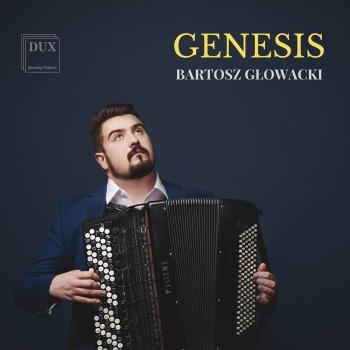 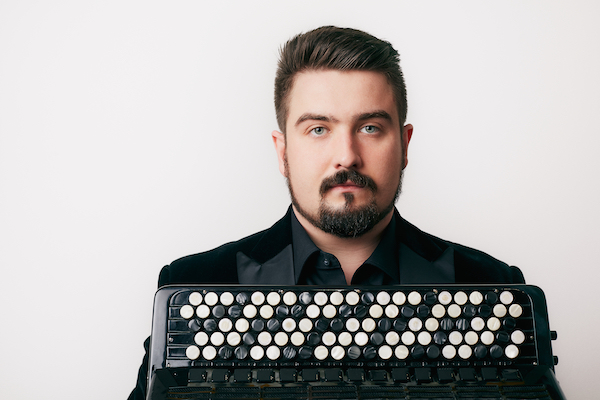 Bartosz Glowacki
is a City Music Foundation Artist and has received numerous awards from the Zygmunt Zaleski Foundation, the Countess of Munster Musical Trust, the Biddy Baxter and John Hosier Music Trust, the Ministry of Culture and National Heritage of Poland. He was selected to be part of the ‘Open Space’ residency at Snape Maltings in 2016 and recently won the ‘Sir John Manduell Prize’ at the Bromsgrove International Competition.
Student of Professors Grzegorz Bednarczyk and Andrzej Smolik, Bartosz was offered a place under the tutelage of Owen Murray at the Royal Academy of Music where he graduated with honours and received the Regency Award in 2016.
Bartosz plays an accordion by Pigini (model Sirius Millennium) and he would like to thank the City Music Foundation for their financial and artistic support.
Described as ‘versatile, full of charisma, characterized by extraordinary care for sound quality’, the accordionist Bartosz Glowacki certainly shows the qualities of a rising star. Winner of numerous competitions, he was awarded the Polish Young Musician of the Year in 2009 and represented Poland at the Eurovision for Young Musician Competition in Vienna.
He has performed as a soloist in prestigious concert halls including the Wigmore Hall, the Royal Festival Hall, the Barbican, the Royal Albert Hall, La Salle Cortot and the Witold Lutoslawski Concert Studio of Polish Radio. Bartosz is recognized as an active chamber musician. Founder of the Deco Ensemble, he has worked with renowned artists from various musical worlds, such as Nigel Kennedy, Trevor Pinnock, Atom String Quartet, Tanita Tikaram, Manchester Collective, Lizzie Ball and Gabriella Swallow. He also plays regularly with international orchestras and companies, including the London Symphony Orchestra, the Royal Philharmonic Orchestra, the London Sinfonietta, the Chroma Ensemble, the National Theatre and the Royal Opera House in London. He recently worked with the Apartment House group for their revival of the opera Dejligt vejr i dag, n’est-ce pas, Ibsen by Henning Christiansen in New York and Copenhagen.