Out & About Will Bernard 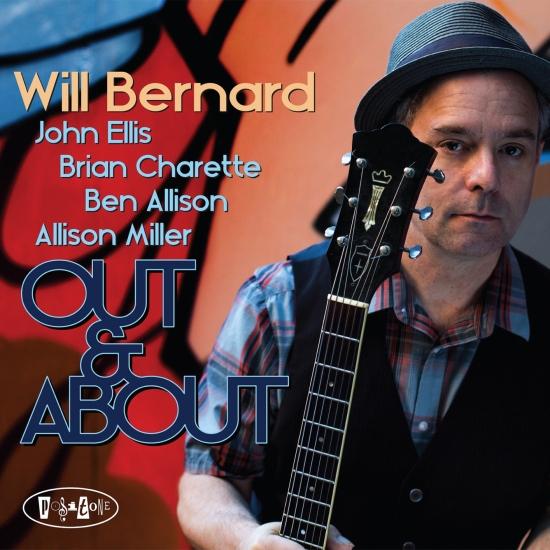 Info for Out & About

Tune in to the tasteful stylings of guitarist Will Bernard on his latest effort "Out & About." Employing a wide palette of genres and sounds, this gifted instrumentalist makes a bold statement of purpose with both his stunning musicianship and his new program of original compositions. Bernard's melodicism shines throughout the session with able assistance of some of the heaviest cats on the scene today, including the collective genius of bassist Ben Allison, organist Brian Charette, drummer Allison Miller, and tenor saxophone sensation John Ellis. While the session is definitely straight ahead and features some hard swinging highlights, the music is also elegantly lyrical and brilliantly evocative of a more modern jazz sensibility.
Will Bernard, guitar
John Ellis, saxophone
Brian Charette, organ
Ben Allison, bass
Allison Miller, drums 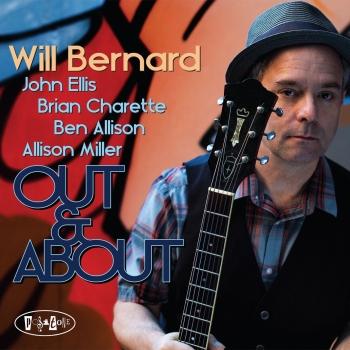 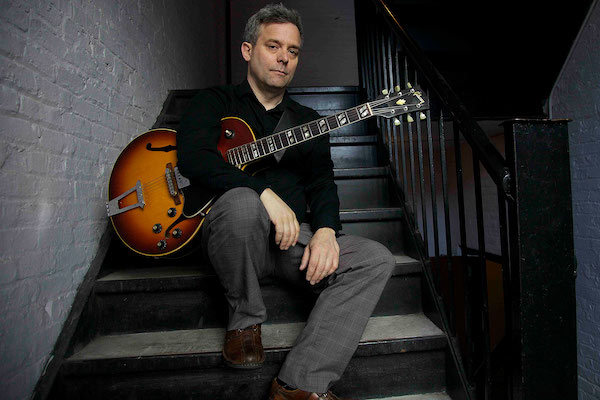 Will Bernard
a Berkeley, CA native and Brooklyn NY transplant studied guitar and piano from an early age with Dave Creamer, Art Lande and Julian White later developing and interest in classical music composition . He received a a degree in music from UC Berkeley where he studied with Andrew Imbrie and others.
He began playing and recording on an international level as a member of Peter Apfelbaum’s Hieroglyphics Ensemble,who made their recorded debut with Don Cherry on “Multikulti” (A&M 1989). Since then, Bernard has participated in a host of boundary stretching groups, ranging from jazz, hip-hop and world music to experimental music, with many stops in between. In the 90’s Bernard recorded and performed with many projects under the direction of acclaimed producer Lee Townsend and worked with groups ranging from the Hindustani-influenced Jai Uttal to the political hip-hop group the Coup. The most commercially successful of these projects was the group T.J. Kirk (with Charlie Hunter) whose sophomore album “If Four Was One” on Warner bros. was nominated for a Grammy in 1997. Will made further inroads with the Stanton Moore trio which toured extensively and made 3 albums on Telarc and a Hal Leonard drum instructional video and book.
Bernard broke out as a bandleader in 1998 with the release of “Medicine Hat” (Antilles/Polygram), showcasing his expert chops and flair for funky, bottom-heavy soul-jazz. He then followed up with two self produced albums (“Motherbug” and “Directions To My House”), before making two albums on Palmetto Records (“Party Hats” and “Blue Plate Special”). “Party Hats” garnered a nominated for a Grammy Award in 2008 for best contemporary jazz album.The all-star “Blue Plate Special” includes performances by Stanton Moore, Andy Hess and John Medeski. In 2011, Bernard released an organ trio record titled “Outdoor Living” to positive reviews with his own genre-bending style.
Bernard’s last two albums are on Posi-tone records “Just Like Downtown” (Posi-Tone 2013) which features John Ellis on tenor sax and bass clarinet, Brian Charette on organ, and Rudy Royston on drums and “Out and About” (2016). which features Ben Allison, Allison Miller, Brian Charette and John Ellis. These recordings demonstrates Bernard’s roots in straight-ahead jazz and more traditional styles as well as funk and free wheeling improv.
As a touring artist, Bernard has hit the road extensively with sin his own bands or as a member of the Stanton Moore Trio, Robert Walter’s 20th Congress, Groundation, and numerous other lineups. As a leader Bernard has performed at The Monterey, North Sea, SF Jazz, Jazz a Vienne, Bumbershoot, Be-Bop and Brew, Montreal, Vancouver, Carribean Sea, and The High Sierra festivals,as well as clubs and festivals across the US, Europe and Canada. They have opened for Herbie Hancock and the Head Hunters, Jimmy McGriff, The Funky Meters, John Scofield, Medeski, Martin and Wood, Zigaboo Modeliste and the Charlie Hunter Quartet.
Will has performed and or recorded with Dr Lonnie Smith,Tom Waits, Ben Sidran, Dr John, Booker T.Jones, Steven Bernstein’s Millennial Territory Orchestra, Butler/ Bernstein and the Hot Nine, George Porter Jr., Zigaboo Modeliste, Global Noize, Greyboy Allstars, Galactic, Medeski, Martin and Wood, Mike Clark, Idris Muhammad and others.
As well as leading his own groups, Will performs regularly with the NY collaborative electro-funk band “Pleasure Drones”, the W-Beez (With Wil Blades), Peter Apfelbaum’s Sparkler and John Medeski’s Mad Skillet with Kirk Joseph and Terence Higgins.