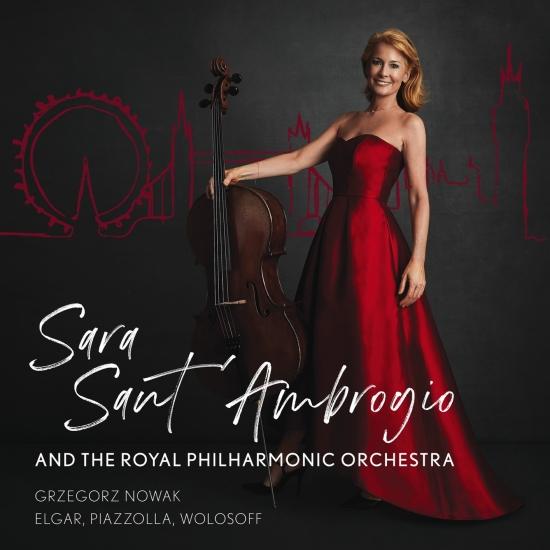 Grammy Award winning cellist Sara Sant'Ambrogio first hit the international stage by winning the Tchaikovsky International Violoncello Competition in Russia which resulted in her Carnegie Hall debut televised nationally in the US. Since then, she has performed thousands of concerts on six continents both as a soloist and with her ensemble, the Eroica Trio. Sara has finally fulfilled her lifelong dream of recording the romantic masterpiece, Elgar Cello Concerto, with the Royal Philharmonic Orchestra-one of England's finest orchestras. She pairs the Elgar with a lush, new romantic cello concerto written for her by Bruce Wolosoff and her own arrangements of Astor Piazzolla's sultry Libertango and Oblivion to complete a recording designed to delight the listeners ears and linger in their souls.
Sara Sant'Ambrogio, cello 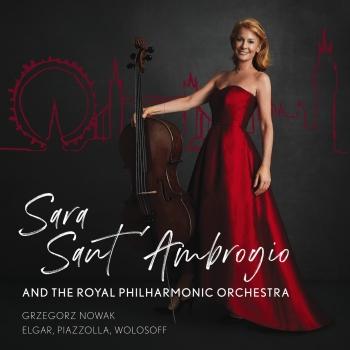 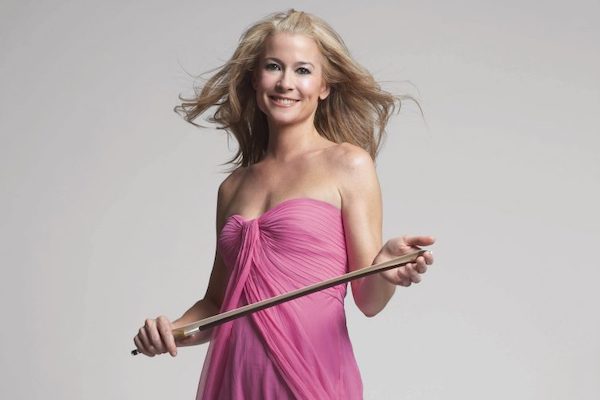 Sara Sant’Ambrogio
Grammy Award-winning cellist Sara Sant’Ambrogio first leapt to international attention when she was a winner at the International Tchaikovsky Violoncello Competition in Moscow, Russia. As a result of her medal, Carnegie Hall invited Ms. Sant’Ambrogio to perform a recital that was filmed by CBS News as part of a profile about her, which was televised nationally. The New York Times described Ms. Sant’Ambrogio’s New York recital debut as “sheer pleasure,” saying “There was an irresistible warmth in everything Miss Sant’Ambrogio did.”
Ms. Sant’Ambrogio has appeared as soloist with such orchestras as the Atlanta, Beijing Philharmonic, Boston, Budapest, Chicago, Dallas, Moscow State Philharmonic, Prague Chamber Orchestra, Osaka Century Orchestra (Japan), Royal Philharmonic, St. Louis, San Francisco, Seattle and Vienna Symphony; she has performed thousands of concerts on six continents at the world’s major music centers and festivals including Aspen, Concertgebouw in Amsterdam, Hollywood Bowl, Lincoln Center, Kennedy Center, Konzert Huset in Stockholm, Marlboro, Muiskverein in Vienna, Ravinia, Orchard and Suntory Halls in Tokyo and Great Mountain Festival in Korea. Ms. Sant’Ambrogio is particularly excited to have finally performed in all 50 United States last season when she performed at the Juneau Jazz and Classics Festival in Alaska!!
Always looking to draw in new audiences and push the boundaries of classical music, Sara has performed with Sting and Joshua Bell in the production of “Twin Spirits,” the story of the love affair between Clara and Robert Schumann. The Los Angeles Times wrote, “Joshua Bell and Sara Sant’Ambrogio played with lyrical restraint and lovely tone.” Tracks from her solo cd “Dreaming” have been featured on multiple film soundtracks, including the opening title on the HBO award winning documentary, “A Matter of Taste.” Ms. Sant’Ambrogio has collaborated with the New York City Ballet in 7 highly successful sold out concerts at Lincoln Center performing the Bach Suites and was recently featured in the opening Fall Gala of the ballet performing Elgar Cello Concerto. Sara has recorded with Tim McGraw on the #1 hit “Humble and Kind” and performed with Rufus Wainwright in the inauguration of a new concert series at the National Arts Club.
Ms. Sant’Ambrogio started her cello studies with her father John Sant’Ambrogio, who was principal cellist of the St. Louis Symphony, and at the age of 16 was invited on full scholarship to study with David Soyer at the Curtis Institute of Music where she received her high school diploma. Three years later, world renowned cellist Leonard Rose invited Ms. Sant’Ambrogio to study at The Juilliard School; within weeks of arriving, she won the All-Juilliard Schumann Cello Concerto Competition, resulting in the first of many performances at Lincoln Center.
In addition to her Tchaikovsky Medal, Ms. Sant’Ambrogio has won numerous international competitions, including The Whitaker, The Dealey, Artists International, Palm Beach Awards and the Naumburg Award with her ensemble the Eroica Trio. Ms. Sant’Ambrogio won a Grammy Award for her performance of Bernstein’s Arias and Barcarolles and a NPR Best Debut Recording with Eroica for their Debut recording. She has been profiled in Strings, Glamour, Gramophone, Vogue, Strad, Elle, Bon Appetit, In Fashion, Travel and Leisure, Detour, Fanfare magazines as well as The New York Times, Wall Street Journal, USA Today, and on CBS, ABC, PBS, USA and CNN networks. Ms. Sant’Ambrogio is the subject of a feature length documentary, which has had hundreds of airings nationwide on PBS and international networks.
Ms. Sant’Ambrogio is a founding member of the Eroica Trio, which has toured extensively the US, Europe, Asia, Middle East, Australia and New Zealand. The trio opened the “Distinctive Debuts” series at Carnegie Hall, and that year represented Carnegie Hall and the United States as the official chamber music ensemble in concerts worldwide. While touring the globe, Eroica has released 9 celebrated recordings garnering multiple Grammy nominations.
While touring with all the beloved standards of the cello repertoire, Ms. Sant’Ambrogio is very excited to be giving the world premiere of Michael Bacon’s Cello Concerto with conductor Alexander Micklethwate and the Oklahoma City Philharmonic in the 2019-2020 season as well as the release of her latest recording with the Royal Philharmonic Orchestra of the romantic masterpiece, Elgar Cello Concerto, a gorgeous new concerto written for her by the American composer Bruce Wolosoff and two of her own arrangements of Astor Piazzolla’s sultry Oblivion and Libertango.