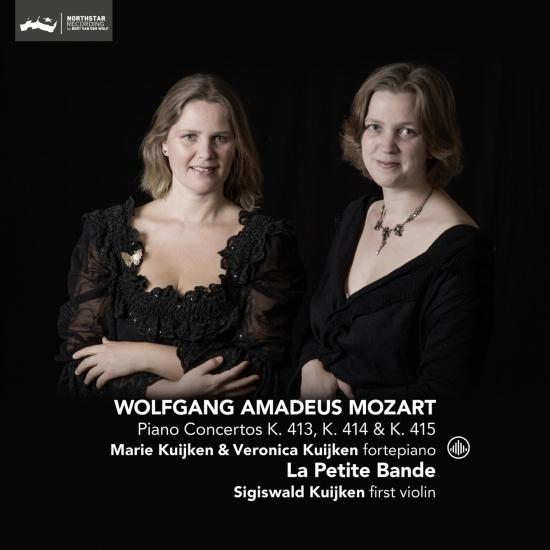 This recording from the Kuijken family, renowned world-wide as early music specialists, presents Mozart's Piano Concertos K. 413, 414 & 415 in the composer's versions for fortepiano and string quartet. It's a new, exciting instalment in the rich discography of one of the greatest Aufführungspraxis scholars.
Sigiswald Kuijken founded La Petite Bande - which he leads from first violin here - in 1972. The fortepiano soloists are his daughters Marie Kuijken (Piano Concerto No. 11, K.413) and Veronica Kuijken (Piano Concertos Nos. 12, K.414 and 13, K.415).
From notes by Sigiswald Kuijken: "Mozart conceived the three piano concertos K. 414, 413 and 415 in 1782, one year after he had settled in Vienna as a more or less free-lance musician. From onset, his idea was to get these works published. In order to enhance the attraction for publication, he decided to write these concertos in such a way that they could be performed not only with full orchestra (i.e. strings and winds), but also with a reduced accompaniment of only string quartet. Clearly, Mozart did not consider this strategic starting point as an artistic limitation, but rather as a challenge. This resulted in a very careful and beautiful string writing, matching the solo part in the most effective and intimate way.
"Although Mozart always mentions the "normal" composition of the string quartet (two violins, viola and violoncello), I took the liberty to replace the violoncello by a double bass in our performances and our recording of these concertos. My reason was purely musical. Looking and listening to these works, we find a clear difference concerning their string-bass writing compared with Mozart's own quartets for violin, viola, violoncello and piano, or also his trios for violin, violoncello and piano. In these piano concertos the string bass is only playing the essential bass-line of the whole texture, thus very often doubling in simplified way the soloist's left hand."
La Petite Bande:
Elise Christiaens, double bass
Marleen Thiers, viola
Sigiswald Kuijken, violin
Sara Kuijken, violin 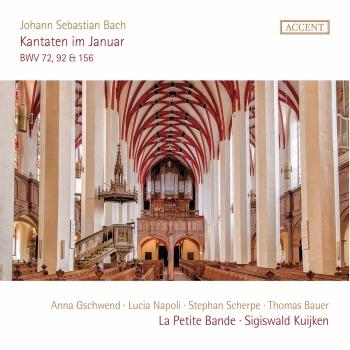 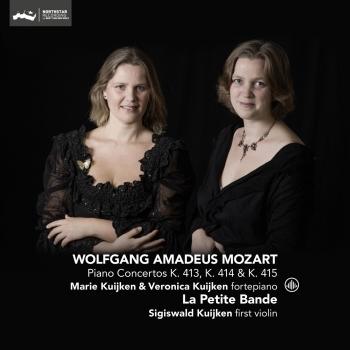 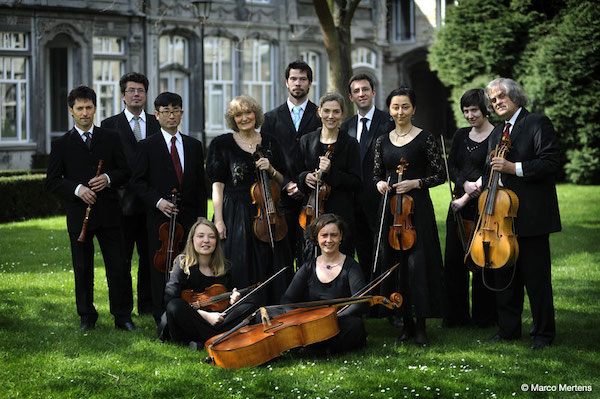 La Petite Bande
(Belgium) was founded in 1972 by Sigiswald Kuijken at the request of the record company Harmonia Mundi (Germany) in order to record Lully's "Le Bourgeois Gentilhomme", under the direction of Gustav Leonhardt. The orchestra takes its name and constitution from Lully's own orchestra at the court of Louis XIV. All its members are internationally renowned specialists in the early music field.
Although originally La Petite Bande was not meant to become a permanent orchestra, the success of the recordings was such that they began to give concerts regularly. Having initially concentrated mainly on French music, the orchestra's repertoire has expanded over the years to include music by the Italian masters and that of Bach, Handel, Gluck, Haydn, Mozart and others.
The 18-part CD series "Cantatas of J.S. Bach" (ACCENT) is complete since February 2014. Sigiswald Kuijken applies the latest findings in Bach research: no choir, but rather a vocal quartet together with a minimal instrumental scoring. In this way, the fine musical texture of these cantatas can be much better (and more naturally) revealed.
La Petite Bande has recorded instrumental as well as vocal music, including operas and oratorios from the Baroque and Classical periods. La Petite Bande currently makes recordings for Accent, Challenge, Deutsche Harmonia Mundi, Denon, Seon/Virgin and Hyperion.
La Petite Bande has performed in a multitude of international festivals and concert series, in Europe, Japan, Australia, South America and China.
From 1997 to 2018, La Petite Bande was resident in the city of Leuven.