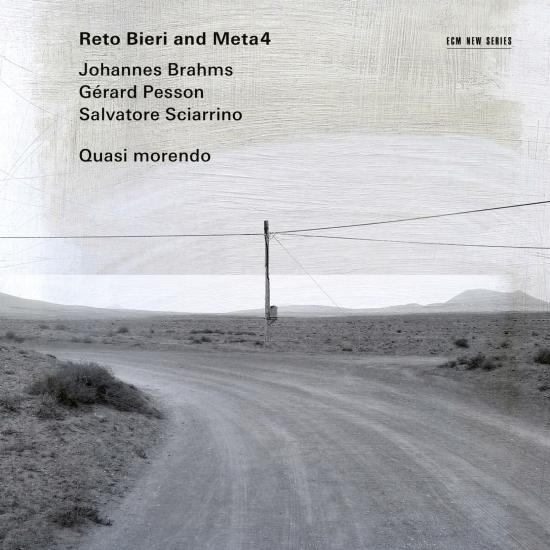 Reto Bieri’s solo album Contrechant, released in 2011, was widely praised for the Swiss clarinettist’s beauty of tone and his uncommon expressiveness with extended instrumental techniques. Quasi Morendo begins with a new exploration of one of the pieces featured on Contrechant, Salvatore Sciarrino’s Let Me Die Before I Wake (1982), with its “whisper-quiet sound world of harmonics, multiphonics and tremolandos” (The Guardian). Bieri is then joined by Finnish string quartet Meta4 for a profound interpretation of Johannes Brahms’s Quintet op 115 (1891). Inspired by Brahms’s friendship with clarinettist Richard Mühlfeld the quintet sounds freer, and more idyllic, than the composer’s earlier chamber music, yet is one of his most meticulously constructed works. The album closes with Gérard Pesson’s Nebenstück (1998), a ghostly re-arrangement of Brahms’s Ballade, Op. 10 No. 4.
Reto Bieri, clarinet
Meta4 Quartet:
Antti Tikkanen, violin
Minna Pensola, violin
Atte Kilpeläinen, viola
Tomas Djupsjöbacka, violoncello 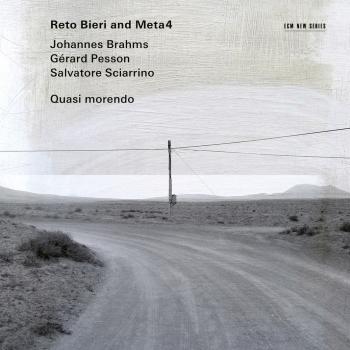 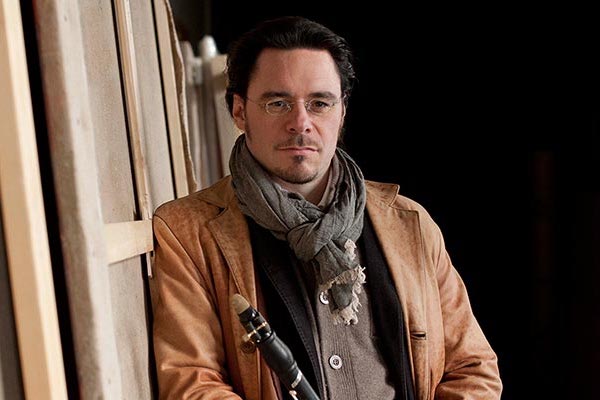 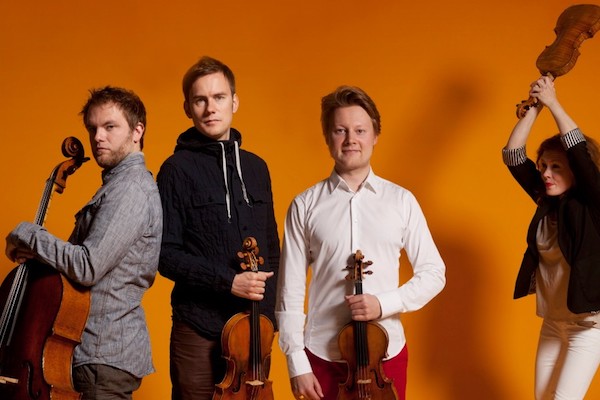 Reto Bieri
Since 2014, the internationally renowned Swiss musician Reto Bieri has been active Director of the DAVOS FESTIVAL – young artists in concert, a Festival that has developed its own unique identity under his leadership.
Born in Zug (Switzerland) and greatly influenced by Swiss folk music throughout the course of his upbringing, Reto Bieri began his studies at the Music Academy in Basel with François Benda, and later with Charles Neidich at the Julliard School in New York. Both his education in chamber music, received by composer György Kurtag and pianist Krystian Zimerman, as well as encounters with writer Gerhand Meier and the musician Eberhard Feltz all fundamentally influenced Reto Bieri’s work.
In 2001, Reto Bieri was prize winner of the «Tribune International des Jeunes Interprètes», the competition of European radio stations. Since this success, he has been internationally active as a soloist and chamber musician, and is a regular guest at many festivals and renowned institutions. Reto Bieri appears with a myriad of orchestras, such as the Tchaikovsky Symphony Orchestra, Bruckner Orchester Linz, Munich Chamber Orchestra, Istabul State Symphony Orchestra, Oxford Chamber Players, Brandenburgische Philharmonie, Borusan Orchestra, Zurich Chamber Orchestra, Camerata Zürich, Symphony Orchestra Basel, Kammerorchester Basel, Kremerata Baltica, Lucerne Symphony Orchester and the Orquestra Sinfonica de Navarra. He has performed under distinguished conductors including Vladimir Fedoseyev, Kurt Masur, Dennis Russel Davies, Marc Foster, Andrew Litton and Kristjan Järvi. Primarily, his passion lies within chamber music. Reto Bieri regularly collaborates with partners such as Heinz Holliger, Gidon Kremer, Zoltan Koscis, Alexander Lonquich, Patricia Kopatchinskaja, Sol Gabetta, Ilya Gringolts, Pekka Kuusisto, Nicolas Altstaedt, Herbert Schuch and Fazil Say, as well as with a variety of string quartets: the Quatuor Ardeo (Paris), the Amaryllis Quartett (Cologne), the Bennewitz Quartett (Prague), the Szymanowski Quartett (Warsaw), the Borusan Quartett (Istanbul), the Meta4 Quartet (Helsinki), the Quatuor Hermès (Paris), the Carmina Quartett (Zurich), the Quarteto Casals (Barcelona), the Casal Quartett (Zurich) and the Rosamunde Quartet (Munich).
The intensive and fruitful collaborations between Reto Bieri and some of the most varied composers of our time – for example, Heinz Holliger, György Kurtag, Pierre Boulez, Elliott Carter, Tigran Mansurian, Fazil Say, Giovanni Sollima, Gerd Kühr, Michel Roth and Artur Avanesov – is an integral part of his occupation, and numerous works have been composed for Reto Bieri as a result. Since 2010, Reto Bieri has been working together with the renowned Munich-based label ECM by Manfred Eicher. His debut album “Contrechant” with works for solo clarinet by Luciano Berio, Heinz Holliger, Salvatore Sciarrino, Elliott Carter, Peter Eötvös and Gergely Vaida received great critical acclaim. Together with violinist Patricia Kopatchinskaja and the pianist Markus Hinterhäuser, a further CD appeared under the ECM label with music by Russian composer Galina Ustvolskaya. The latest duo album “Take two” together with Patricia Kopatchinskaja was released in November 2015 under the Alpha Classics label.
In the coming 2016/2017 season, Retro Bieri’s engagements include performances at the Wigmore Hall in London, at the Concertgebouw in Amsterdam, in the Stadtcasino Basel, at the Konzerthaus in Berlin (together with Patricia Kopatchinskaja), at the „Konzertsommer“ of the Mecklenburg-Vorpommern Festival (with violinist Vilde Frang and pianist Kit Armstrong), and at the international music festival „Lenzburgiade“(with soprano Simone Kermes and the Festival Strings Lucerne).
In 2012, Reto Bieri was appointed Professor for Chamber Music at the Hochschule für Musik Universität Würzburg (University of Music Würzburg) in Germany.
Meta4
formed in 2001, is one of the internationally most successful Finnish string quartets. In 2004 it won the first prize in the International Shostakovich Quartet Competition in Moscow, and was also awarded a special prize for best Shostakovich interpretation. The quartet enjoyed continued success in 2007, when it won the first prize in the International Joseph Haydn Chamber Music Competition in Vienna. Later that year the Finnish Minister of Culture awarded Meta4 with the annual Finland Prize in recognition of an international breakthrough. Meta4 was selected as a BBC New Generation Artist for 2008–2010 and in 2013 the Fund of Jenny and Antti Wihuri awarded the quartet with a special prize in recognition of its work.
Meta4 performs regularly in key music capitals and concert halls around the world, for example Wiener Konzerthaus, Wigmore Hall and King’s Place in London, Auditorio Nacional in Madrid, Cité de la Musique in Paris and Stockholms Konserthus, and has recently also toured in Australia. Furthermore, Meta4 served as the Artistic Director of Oulunsalo Music Festival between 2008 and 2011 and is a quartet-in-residence at the Kuhmo Chamber Music Festival since 2008.
The quartet has studied in the European Chamber Music Academy (ECMA) under Hatto Beyerle and Johannes Meissl. They have released three recordings on Hänssler Classics: Haydn’s String Quartets op. 55 1–3 (2009), which was awarded with the esteemed Echo Klassik Award 2010; Shostakovich’s String Quartets 3, 4 & 7 (2012), which received the Record of the Year 2012 award by the Finnish Broadcasting Company YLE as well as the Emma prize (the Finnish Grammy) in the category of the Classical Album of the Year; and Bartók’s String Quartets 1 & 5, released in October 2014. The quartet has also released an album of Kaija Saariaho’s chamber music works (Ondine, 2013) and an LP of Sibelius’s String Quartet ‘Voces Intimae’ (Berliner Meister Schallplatten, 2013).
The members of Meta4 play distinguished instruments, which include a Stradivarius, kindly on loan from the Finnish Cultural Foundation, a Carlo Bergonzi violin, kindly on loan from Signe and Ane Gyllenberg's Foundation and a cello made by Lorenzo Storioni in Cremona in 1780.