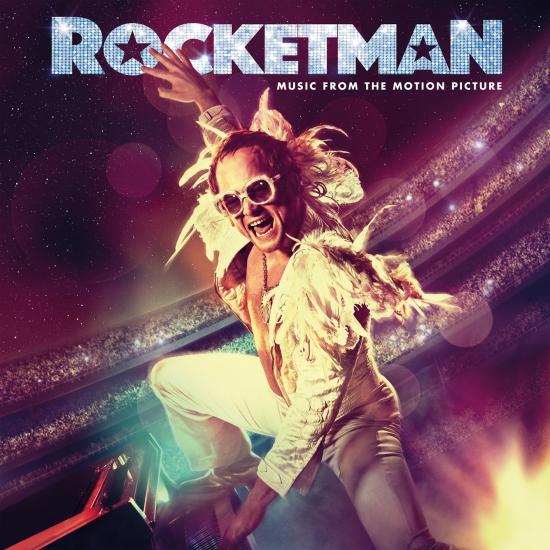 The album sees celebrated producer and composer Giles Martin reinterpreting and reimagining Elton's iconic hits, tailoring the music specifically to support the narrative of the upcoming major motion picture, ROCKETMAN, with a truly show-stopping vocal performance from lead actor Taron Egerton.
Elton John says: “It was so important that the music I composed and recorded had to be sung by Taron. I wanted his interpretation of me, through Bernie’s lyrics & my music - not just acting. I left Taron in the hands of Giles Martin, who I trusted implicitly because he's brilliant. I didn't want to be in Taron's shadows, watching over the process, I trusted them to do what they needed to do, artistically, and listening back I've been astonished with the results. Getting the music right was the most important thing, as the songs in the film are integral to the story.”
Taron Egerton says: “The beauty of having Elton involved with the film is that we've been able to work with him to see how far we can take these classic songs. Giles Martin has impeccable taste and massive skills to bring the songs to a place where they are faithful and daring as well.”
Giles Martin says: “The great thing about Elton is that he is a true artist and he wants people to expand on his work - he wants interpretations done, it's refreshing for him. We had scope to play around with things and think how we address the songs. The songs are the story of the movie, the heartbeat of what happens. Once the songs start a whole world opens up. In Taron I've never known a singer who dedicates himself so much to the process. I don't think anyone else could have played Elton.”
Tasked with taking Elton’s unparalleled back catalogue and reimagining it to fit the film’s narrative, Martin worked closely with the filmmakers, supervising all of the music for the production and pulling a vocal masterclass from Taron in the studio. From transforming “Saturday Night’s Alright for Fighting” into an epic ensemble piece, to morphing “I Want Love” into a heart-breaking moment of conflict around little Reggie’s family meal, each track has been sculpted to form a unique part of the narrative of this most incredible of stories. The soundtrack also contains a brand-new Elton John and Bernie Taupin composition “(I’m Gonna) Love Me Again” performed by Elton and Taron Egerton. The album is produced by Giles Martin (except “(I’m Gonna) Love Me Again” co-produced by Giles Martin and Greg Kurstin) and was recorded between 2017 and 2019 at London’s legendary Abbey Road Studios and AIR Studios. Executive Album Producers are Elton John, David Furnish, Matthew Vaughn and Dexter Fletcher.

Madman Across The Water

Elton John
The monumental career of international singer/songwriter and performer Elton John has spanned more than five decades. He is one of the top-selling solo artists of all time, achieving 35 gold and 25 platinum albums, and he has had 29 consecutive US Top 40 hits. Elton has sold more than 250 million records worldwide, and holds the record for the biggest selling single of all time, ‘Candle in the Wind ’97’, which sold over 33 million copies. Since his career began in 1969, Elton has played over 3,000 concerts worldwide.
In 1970 Elton's self-titled breakthrough album and evergreen hit ‘Your Song’ introduced him to an international stage, and in the period between 1970-76 with producer Gus Dudgeon at the helm, Elton and his song writing partner Bernie Taupin they made an astonishing fourteen albums, including the legendary’ Goodbye Yellow Brick Road,’ and ‘Captain Fantastic And The Brown Dirt Cowboy’ - the first album ever to enter the Billboard Chart at Number One.
In the 1980s he had hits with the albums ‘21 At 3’, ‘Jump Up!’ and ‘Too Low For Zero’ - the home of two of Elton's live favourites, ‘I Guess That's Why They Call It The Blues’ and ‘I'm Still Standing’.
Five decades since the 1969 release of his first album, ‘Empty Sky’, Elton John is creating some of the finest music of his career. The 2001 album ‘Songs From The West Coast’ gave him another smash hit single with ‘I Want Love’. In 2002 he was awarded an honorary doctorate from the Royal Academy of Music. Other landmark awards include Best British Male Artist Brit Award 1991; induction into the Rock ’n’ Roll Hall of Fame in 1994; five Grammy Awards 1986-2000; Grammy Legend Award, 2001; Kennedy Center Honor, 2004; 11 Ivor Novello Awards between 1973 and 2000; and in 1998, a knighthood from Queen Elizabeth II.
2007 saw the release of ‘Rocket Man - The Definitive Hits’, a single CD album which features eighteen classic hit songs. Also in 2007, for the first time ever, Elton's entire back catalogue of nearly 500 tracks (90 singles and 32 albums) became available to download legally. The release of ‘Rocket Man’ marked a huge anniversary for Elton - on March 25th, 2007, he celebrated his 60th birthday while breaking his own record with an unmatched 60th concert at the legendary Madison Square Garden in New York. No other entertainer has come close to matching this record.
Elton remains committed to his music and to touring, becoming more rather than less busy as time passes. In 2011 Elton returned to The Colosseum, Caesars Palace, Las Vegas with his all-new show, ‘The Million Dollar Piano’. In 2012 he returned to the recording studio with producer T Bone Burnett and toured North, Central and South America. His 2012 plans include a tour of Europe plus a special appearance at The Queen’s Diamond Jubilee concert at Buckingham Palace.