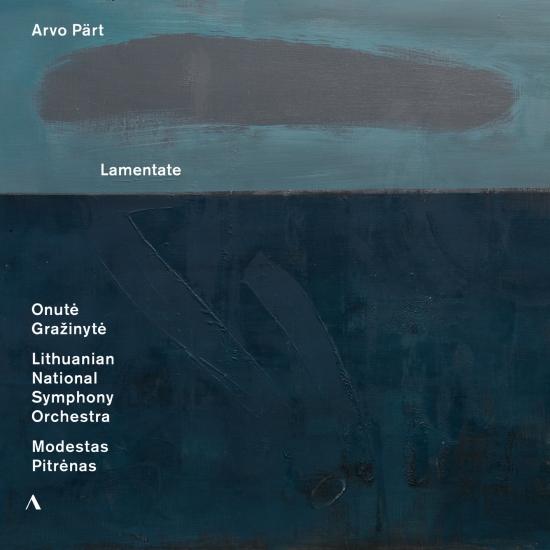 In honour of Arvo Pärt's 85th birthday on September 11, 2020
Arvo Pärt’s compositions were and are often inspired by external circumstances. Evidence of this can be seen in the selection of works for and with piano, which Onutė Gražinytė chose for her debut recording. The “Lamentate” was inspired by Anish Kapoor’s sculpture “Masyas”; in 1977 he dedicated the Variations for the healing of Arinushka” to his daughter; “Pari intervallo” was inspired by the ensemble “Hortus Musicus”, and the list goes on... “Für Alina” is of particular importance to the Lithuanian pianist as she knows the mother of the piece’s dedicatee. Onutė Gražinytė was astounded by the simple notation. “First you ask yourself: What is this?” Her playing reveals that she has understood. “Arvo Pärt has reached the core. It’s no coincidence that he dedicated many piano pieces to children and let a boy sing the “Our Father”.
It’s the pure ideal that children are born with, and to which the composer has returned.” Recorded at Lithuanian National Philharmonic Hall, May 2020, and Lithuanian National Culture Centre Recording Studio, April 2019 (Lamentate)
Onute Grazinyte, piano
Lithuanian National Symphony Orchestra
Modestas Pitrenas, conductor
Edward King, cello 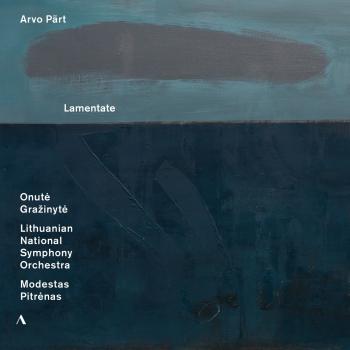 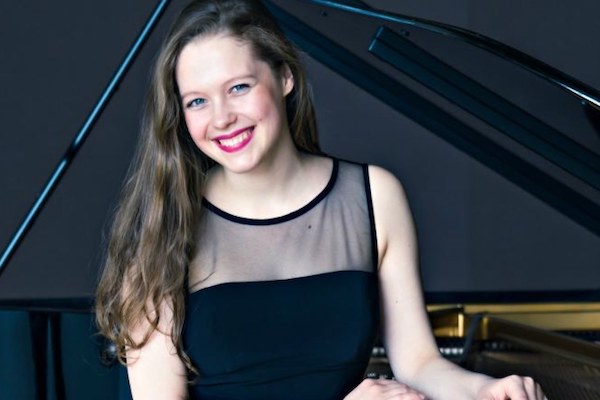 Onutė Gražinytė
was born to a family of musicians in 1996 in Vilnius, Lithuania. At the age of five she started studying piano under her mother. At the age of six she entered the National M.K. Čiurlionis School of Art and was an active participant of cultural life there. In 2015, she was the music composer and stage director of the New Year Eve opera at the school – a longstanding tradition carried on by the to be graduates. ​
Since 2015, Onutė Gražinytė has studied piano under the tutelage of Roland Krüger at the Hanover University of Music, Drama and Media. She is a scholarship student of Yehudi Menuhin Foundation “Live Music Now” Hannover.
She took part in master classes led by Matti Raekallio, Ewa Kupiec, Andrei Gavrilov, Stephen Kovacevich, Ronald Brautigam, Mūza Rubackytė, Nina Seriogina, Maurizio Moretti etc. ​
Onutė Gražinytė is a laureate of 10 national and international competitions: was awarded a diploma and a special prize for the best performance of a 20th c. work at the 4th International Young Performers Competition in Głubczyce (Poland, 2007), a prize at the Leonas Povilaitis Young Performers Competition (2008), a prize at the J.S Bach National Competition in Vilnius (2009), a laureate diploma and a special prize for the best performance of B.Dvarionas’ work at the 17th Balys Dvarionas Piano and String Instrument Competition in Vilnius (2012), the first prize at the 4th Rosario Marciano International Piano Competition in Vienna (2012), the first prize and a special prize from a jury member Marian Sobula in the EMCY Peter Toperczer International Piano Competition in Slovakia, etc. ​
As a soloist Onutė Gražinytė has appeared with the Lithuanian State Symphony Orchestra, the National M.K. Čiurlionis School of Art Orchestra, Klaipėda Chamber Orchestra, Kaunas Symphony Orchestra, Alicante University Philharmonic Orchestra, Salzburg Mozarteum Orchestra and National Orchestra of Lyon. ​
She is also an ardent chamber music lover, enjoys playing duos with violin or cello. In 2017, O. Gražinytė has collaborated with Musik21 Niedersachsen contemporary music ensemble at the Cologne Philharmonic Hall where she performed a harpsichord part.
She gave recitals in Lithuania, Switzerland, Italy, Austria, Germany, Estonia, the Netherlands, Poland, France and Denmark.
In 2015, the President of the Republic of Lithuania acknowledged O. Gražinytė for her musical achievements in national and international competitions. ​
In 2018 the young pianist had performed in renowned concert halls, such as Warsaw Philharmonie as well as Berlin Konzerthaus. ​
In the same year Onute became a winner of “Haiou Zhang Piano Award 2018”.
Modestas Pitrenas
is one of the most successful Lithuanian conductors of the younger generation. He has already established himself internationally through his extensive symphonic concert activity as well as opera conductor. He made his debut with Mozart's "Magic Flute" at the Cologne Opera, performed at the Deutsche Oper am Rhein, Deutsche Oper Berlin, the Bolshoi Theater in Moscow, the National Opera in Warsaw, the Aalto Theater Essen, the Stuttgart Opera, the Finnish National Opera Helsinki, the Theater Basel.
Former Chief Conductor of the Kaunas Symphony Orchestra in Lithuania and former National Music Director of the Latvian National Opera in Riga, is currently Principal Conductor and Artistic Director of the Lithuanian National Symphony Orchestra in Vilnius. Since the 2018/2019 season, Modestas Pitrenas is principal conductor of the Symphony Orchestra and the Theater St.Gallen.
Pitrėnas has studied at the Mozarteum and has graduated from Lithuanian Academy of Music twice – choir (1997) and symphony conducting (under prof. J. Domarkas, 2003). He continued his studies for licentiate in music in 2002-2004 and participated in seminars and master courses held by famous conductors, among them E. P. Salonen, J. Panula, H. Rilling.
He has released over 10 choral, symphonic and opera CDs.
In recognition of his interpretation of the classical and contemporary Lithuanian music, he was awarded the Lithuanian National Arts and Culture Prize in 2012.