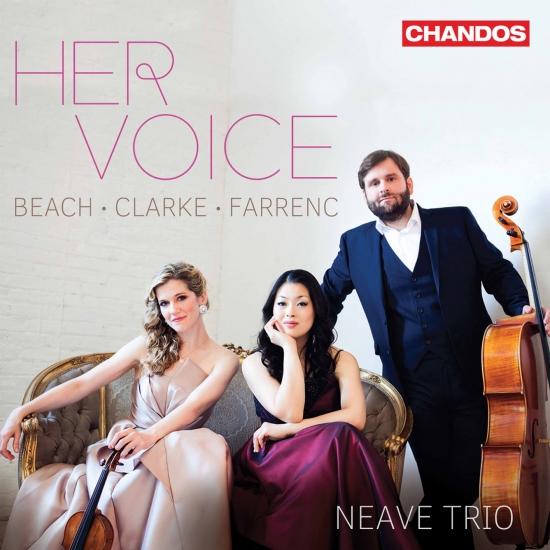 Info for Her Voice

For this their third album for Chandos, the Neave Trio chose to celebrate the work of three outstanding female musical pioneers.
Louise Farrenc studied piano with Clementi and Hummel, and composition with Reicha. She was the first female Professor at the Paris Conservatoire, teaching piano there from 1842 until 1872, although it took her a decade to achieve equal pay with her male colleagues.
Rebecca Clarke was a composer and viola player, and became the first female player in Henry Wood’s Queen’s Hall Orchestra, in 1912.
Amy Beach was an American pianist and composer, and her Gaelic Symphony, premiered by the Boston Symphony Orchestra in 1896, was the first symphony composed and published by an American woman.
These piano trios, so vividly contrasting in style, provide an excellent gateway into the sound-worlds of three diverse, pioneering composers.
A virtuoso pianist and French composer from the Romantic era, Louise Farrenc’s Piano Trio in E-flat Major, Op. 33 unifies the strings with the piano in a supportive, balanced setting of exuberant French elegance. Amy Beach’s Piano Trio in A minor, Op. 150 was composed late in her career, and incorporates lush, romantic melodies over a variety of textures, tones, and impressionistic colors. One of her most prominent pieces, Rebecca Clarke’s Piano Trio showcases her unique harmonic language, influenced by both the French and British styles of the early 20th century, as well as by folk music.
Anna Williams, Neave Trio violinist, says of Her Voice, “There is so much great repertoire that is under-performed, especially from women composers, and we feel it is essential to program and record these masterworks alongside the more well-known catalogue of piano trio repertoire. These women really broke down barriers and paved the way for future generations and we are excited to honor their unique contributions and voices.”
Her Voice is the Neave Trio’s third album Chandos Records, following French Moments (2018), which includes the only known piano trios by Debussy, Fauré, and Roussel. According to BBC Music Magazine, “The performances balance passion with sensitivity and grace,” while The Strad praises the trio’s “eloquent phrasing and deft control of textures.” Neave’s Chandos debut, American Moments (2016), features works by Korngold, Foote, and Bernstein. BBC Music wrote, “The Trio offers a strong sense of partnership, with the Bernstein bounding along in fine spirit. The Foote shines wonderfully and is well worth discovering,” while American Record Guide expressed Neave’s playing as “idiomatic and attractive.”
The Neave Trio:
Anna Williams, violin
Mikhail Veselov, cello
Eri Nakamura, piano 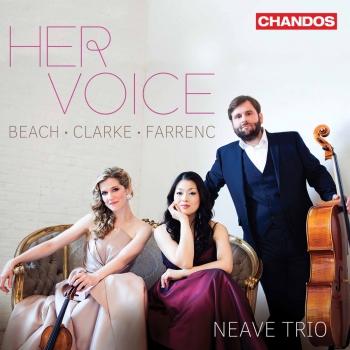 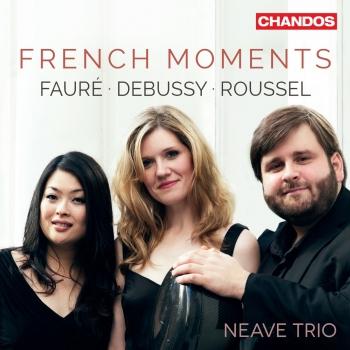 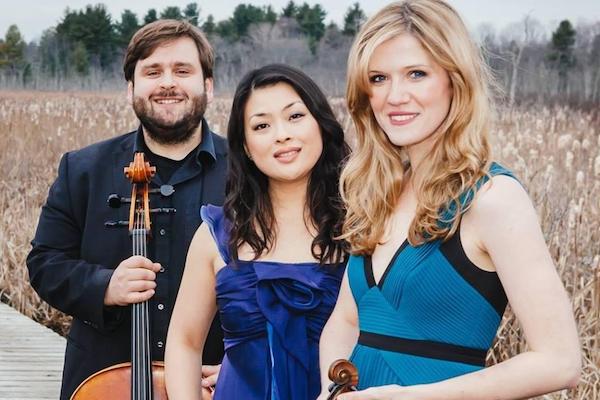 Neave Trio
Hailed by the magazine Fanfare as ‘having exceeded the Gold Standard and moved on to Platinum’, the Neave Trio has emerged as one of the finest young ensembles of its generation. It has been praised for its ‘bright and radiant music making’ by the critic Robert Sherman (WQXR Radio), and described as ‘a consummate ensemble’ by the Palm Beach Daily News and ‘a brilliant trio’ by MusicWeb International. Its debut at the Rockport International Chamber Music Festival was cited among the ‘Best of 2014’ by The Boston Musical Intelligencer, which wrote: ‘it is inconceivable that they will not soon be among the busiest chamber ensembles going.’ Its members originating from the US, Russia, and Japan, the Trio has performed on concert stages from Carnegie Hall in New York to venues in the UK, continental Europe, and Russia, bringing audiences to their feet and receiving the highest critical acclaim. Performances have been broadcast on radio stations across the United States and abroad, notably on American Public Media’s Performance Today, The McGraw-Hill Financial Young Artists Showcase on WQXR Radio (New York), as well as on WGBH Radio (Boston) and WXXI and WCNY Radio (New York). Previous recordings have been met with critical acclaim, included on the 2014 ‘Want List’ in Fanfare, and made Recording of the Month by MusicWeb International. The Trio has held artist residency positions at Brown University, the Banff Centre for Arts and Creativity, San Diego State University, Rochester Institute of Technology, Walnut Hill School for the Arts, and Concord Academy. As part of its mission to create new pathways for classical music and engage a wider audience, the Neave Trio frequently works with artists of all mediums. Notable collaborations include the world premiere performance of Klee Musings, a work dedicated to the Trio by the American composer Augusta Read Thomas, as well as multiple award-winning productions with dance companies and filmmakers.

Booklet for Her Voice