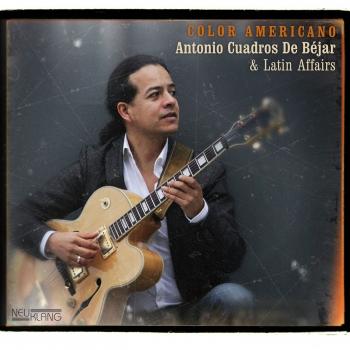 Antonio Cuadros De Béjar
Folk music stands at the beginning of the Bolivian jazz guitarist’s career. He is playing numerous concerts with experienced musicians of his home country before leaving for a five-year long tour throughout Europe.
Antonio Cuadros de Béjar is travelling through Germany, the Czech Republic, Belgium, Italy, France, Luxemburg and the Netherlands. During many concerts, radio and TV appearances he is gaining a lot of experience.
In 1995 he settles down in Germany.
Here he starts playing jazz concerts and engages himself entirely in jazz and Latin jazz. 1999 he finishes his studies with specialisation in arrangement in Munich. He plays more and more self-compositions and loves to arrange pieces for international artists.
2004 he is combining jazz with his native rhythms. Since this time he is regularly inviting Latin American artists to tour Europe together with local artists.
Since 2005 Cuadros de Béjar is giving workshops in harmonics, ear training and arrangement throughout Germany.
Besides his Engagements as a jazz musician he is also organising concerts to present known artists as well as newcomer.