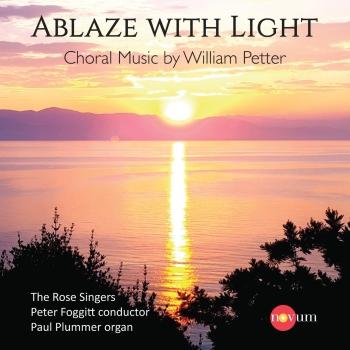 The Rose Singers
are named after William’s daughter. All close friends of William, the singers consist of those who sing regularly with such groups as the BBC Singers, Dunedin Consort, Monteverdi Choir, Polyphony,The Sixteen and Stile Antico. Some performers sang with William from the age of seven as choristers in New College, Oxford; others regularly sang under his direction at the church of St Magnus the Martyr.The singers rehearsed and recorded the CD on 27 and 28 October 2016, barely two weeks after William’s death. All felt privileged to be part of such an uplifting project to celebrate the work of a dear colleague and friend.
Peter Foggitt
is a keyboardist, conductor and composer. He made his BBC Radio 3 debut aged 21, performing Rachmaninov’s third piano concerto. He has won competitions for solo and collaborative piano, including the Kathleen Ferrier Award, and was among the last four competitors in the 2015 St Albans International Organ Improvisation Competition. As an organist, he appears as recitalist, accompanist and concerto soloist. Peter’s career as a conductor began as interim Chorus Master at the Royal Danish Opera and has since involved performances with his own octet, Cries of London, at concert halls and festivals around the UK. Recent engagements have included working as Assistant Conductor at the Royal Opera House,and on the rst opera at Latitude Festival,CautionaryTales.Peter’s compositions and arrangements have been commissioned and performed by artists as diverse as Shirley Bassey,Angela Hewitt and the Choir of St Paul’s Cathedral.His Handel-inspired opera,Pale Shadows,was made into a feature lm and a full-length setting for soloists, chorus and orchestra of this work, entitled Song of Songs is premiered in March 2017. A commercial recording of his music, based around settings of Spenser’s Amoretti is due for release later this year. He is Organist of Holy Trinity, Sloane Square, and is a PhD candidate in composition at Durham.
Paul Plummer
was an organ scholar at New College, Oxford, and then became Director of Music at St Stephen’s Church, Gloucester Road, London. He has given organ recitals at many major venues including St Paul’s Cathedral and Westminster Cathedral, and can be heard on numerous recordings, performing as both organ accompanist and soloist. He has accompanied many major professional groups including the BBC Singers, Monteverdi Choir and The Sixteen, and has been the conductor of the Oxford Bach Ensemble since its formation. Paul is a respected vocal coach, working with students and professional singers, and has coached many of the singers on this CD. He has worked as a repetiteur and vocal coach at the Royal Opera House, Covent Garden, and regularly coaches on international summer opera programmes. Paul is currently working at the Opera School of the Royal Conservatoire of Scotland.
This project has been made possible thanks to the efforts of a great many people including William’s wife, Rebecca, his parents, Hugh and Liza, and his brother, Oliver. Special thanks to Kate Ashby for project managing, and to Matthew Kay, Anna Kenyon, Andrew O’Sullivan and Paul Plummer for their invaluable help.Thanks also to William Vann and The Royal Hospital Chelsea, Sam Lea, Rob Lea,The RVW Trust, Chris and Caroline Wood, Ros White, Nat Daniels, Bea Munby, Alison Lea and Gillian Morriss-Kay, and nally to Katharine Tucker at Sarcoma UK, Edward Wood for assistance with image design, Temple Church for hosting the launch, and Nancy-Jane Rucker and Katherine Bank at Novum Records.