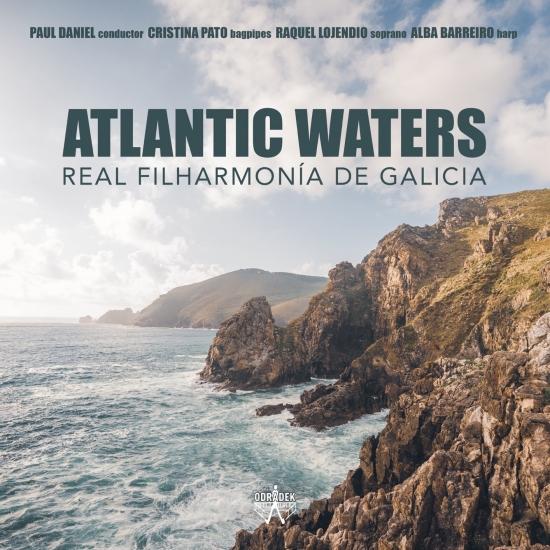 2021 marks 25 years of the Real Filharmonia de Galicia, which celebrates its silver jubilee with 'Atlantic Waters', an album of world-premiere recordings showcasing the cream of contemporary Galician musical talent. The orchestra is conducted on this recording by Paul Daniel, CBE, its Chief Conductor and Artistic Director since 2013, praised in Gramophone magazine for being "particularly adept at finding the score's drama and beauty."
For Fernando Buide, in 'Pasaxes', the words of the contemporary Galician poet Gonzalo Hermo propel his music across frontiers, reaching out to the century-old words of English poet Edward Thomas: it's as though Buide is looking out to share his Galician culture with another part of the world, and the central orchestral interlude creates a powerful bridge. In 'Portico da Illa de Monteagudo' Juan Durn expresses the heart and soul of Galicia in his music: Alba Barreiro's harp becomes the singing voice of the Illa de Monteagudo.
With 'Vivas de vivos e mortos', Octavio Vazquez breaks down barriers with fearsome energy in his concerto for bagpipes ('gaita'): he composed the work for Cristina Pato, and the piece is a hymn of strength and of praise to women in society, to the widows who kept their families together during the economic migrations of the last two centuries. Eduardo Soutullo breaks the boundaries between the real and the imaginary with his witty and fascinating meeting of two technological giants in the final work on the album, 'Jobs and Gates at dawn (and other uchronias)'.
Real Filharmonia de Galicia
Paul Daniel, conductor