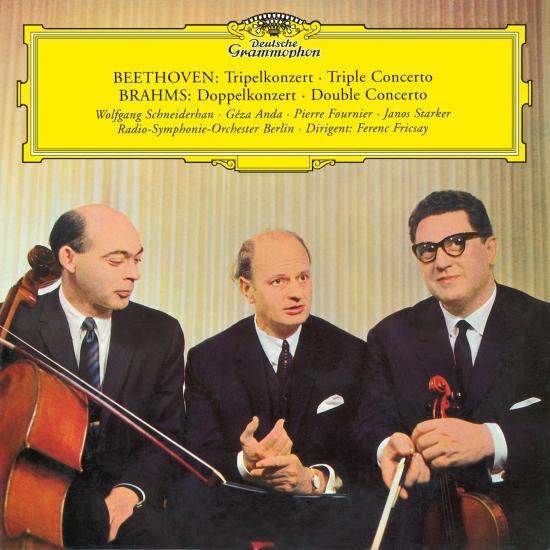 Fricsay conducts concertos by Beethoven and Brahms: Friendship is the connecting link between the two works here. Beethoven is thought to have written his Triple Concerto in 1803 – 04 for his favorite pupil, the Archduke Rudolph. Brahms composed his Double Concerto in 1887 as a peace offering, to heal a breach with his friend the violinist Joseph Joachim. It seems to have done the trick; and it was canny of Brahms, who conducted the first performance (Cologne, October 1887), to have the cellist of the Joachim Quartet, Robert Hausmann, sharing solo hon- ours – it would have been difficult for Brahms and Joachim to have a row with a third party present. I do not know how friendly the soloists on these two famous recordings were, but I recall what a strong “house style” manated from Deutsche Grammophon productions in the 1950s and early 1960s.
The Beethoven Triple and the Brahms Double make a very satisfactory coupling [...]. In [the Beethoven] the conductor is very much in charge, and brings a particularly searching quality to the orchestral part, which seems to have much more distinction and character than usual in his hands. Fournier’s aristocratic playing is a joy, and if Schneiderhan’s tone and phrasing are on a slightly lower level, there is a powerful and imaginative personality at the keyboard in Géza Anda.” (Gramophone)
„The new remastering in DG's The Originals series makes for cleaner, less harsh sonics. The performances remain recommendable, especially the Beethoven.“ (Dan Davis, ClassicsToday.com)
„. . . Fricsay's accompaniment, which has enormous energy and warm-heartedness in equal measure [is marvelous, too]. The same qualities of superlatively natural musicianship are to be heard in the Beethoven Triple Concerto. The sound has come up marvelously. Tremendous.“ (Nigel Simeone, International Record Review)
Janos Starker, cello (on tracks 4 to 6)
Pierre Fournier, cello (on tracks 1 to 3)
Géza Anda, piano (on tracks 1 to 3)
Wolfgang Schneiderhan, violin
Radio Symphonie Orchester Berlin
Ferenc Fricsay, conductor
Recorded tracks 1 to 3 in 1960, tracks 4 to 6 in 1961 at Jesus Christ Church, Berlin, Germany
Digitally remastered