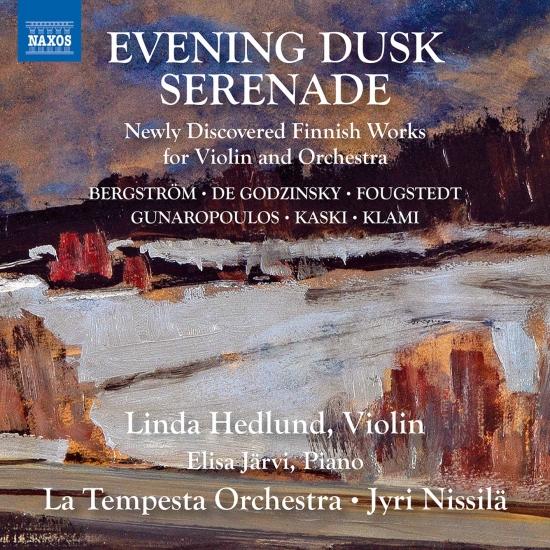 The repertoire of Finnish music for violin and orchestra is full of hidden gems, with a substantial amount of works remaining unperformed and unpublished. The music on this recording represents a style of light classical music that was popular from the 1930s to the 1960s but remains largely forgotten today. All of the composers represented here created highly lyrical and charming works, including Uuno Klami who, after Sibelius, is considered one of the most important composers in the history of Finnish music.
The inspiration behind this recording came about when my friend, the saxophonist Dr Olli-Pekka Tuomisalo, sent me some scores of Finnish music for violin and orchestra which he had recently discovered in an archive. After taking a closer look myself, I was surprised to learn that there exists a substantial amount of, to my knowledge, unperformed and unpublished music dating from around the same time, which is certainly worthy of attention.
The pieces on this album are beautiful, easy to listen to, brilliantly composed and rewarding to play for both soloist and orchestra. The music sits on the lighter side of the violin repertoire but from a performer’s perspective it is not without its technical demands, particularly where Godzinsky’s Valse gracieuse and Humoresque are concerned, both of which one can easily imagine Fritz Kreisler playing brilliantly. Another favourite of mine is Mustalainen (‘The Gypsy’) (1875) by Elemér Szentirmay as arranged by Godzinsky.
These compositions demonstrate that not every piece for solo instrument must be a deep and comprehensive study of the intrinsic nature of the instrument.
I wish to express my gratitude and appreciation to Dr Olli-Pekka Tuomisalo for introducing me to this music and for collaborating with me on this project. I am truly grateful for the support granted by Roihuvuori Church, Helsinki, Finland, Arts Promotion Centre Finland, Svenska kulturfonden, Pro Filharmonia r.y. and The Finnish Music Foundation, and thus making this recording possible. I also wish to thank Ville Komppa, Robi de Godzinsky (son of George de Godzinsky) and conductor Jyri Nissilä for tirelessly working with me in recording, mixing and editing the music. Last, but certainly not least, I wish to thank all the fantastic musicians involved in this project for their inspiring work.
Linda Hedlund, violin
Elisa Järvi, piano
La Tempesta Orchestra
Jyri Nissilä, conductor 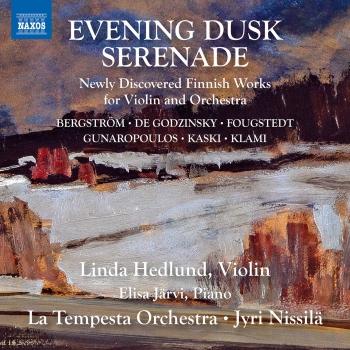 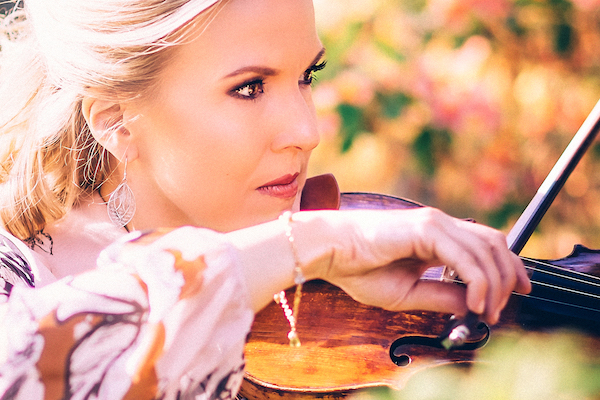 Linda Hedlund
graduated from the University of Music and Performing Arts, Vienna, in 2002 and went on to complete her doctorate in violin performance from the Sibelius Academy, Helsinki, in 2010. She also worked as university assistant at the Sibelius-Academy during her studies. Since 2019 she has specialised in baroque violin performance at Novia University of Applied Sciences in Finland.
Dr. Hedlund has been successful in various competitions and has worked as first concertmaster a.o. at the Pacific Music Festival Japan (1999) with Michael Tilson Thomas and with Tapiola Sinfonietta (2004). She has also gained orchestra experience in some of the main orchestras in Europe and Asia and has appeared as leader/soloist with Sinfonia da Camera Finlandia, the Austrian Chamber Orchestra, various baroque ensembles and recording projects.
Performing internationally as soloist and chamber musician, Hedlund has partnered with a.o. principal players of the Vienna Philharmonic Orchestra and pianist prof. Oliver Kern for chamber music. She has also performed as soloist with a.o. La Tempesta orchestra, Istanbul Milli Insurance Orchestra, Vogtland Philharmonie, Wegelius Chamber Orchestra, Ensemble Borromini, Les Solistes de Monte Carlo, Presidential Orchestra of Northern Cyprus, Austrian Chamber Orchestra, Lohja City Orchestra, Kauniainen City Orchestra and OSUEL Symphony orchestra in Brazil. Linda Hedlund has performed successfully as soloist and chamber musician at many prestigious festivals including Helsinki Festival (Finland), Musica Nova (Helsinki), Grafenegg Festival (Austria), Nancyphonies (France), Honart Festival Konzerthaus Wien, Teatro Bibiena, Mantova and in Carnegie Hall, New York. Her performances have also been broadcasted on radio and TV in Finland (Yle), Rai TV 3, Turkish state television, RSI/Arte in Switzerland, Radio Classic, Borusan radio, Czech Republic (Radio Free Europe), in Austria (ORF) and in the US (WFMT).
In addition to her career as a performing artist, she is active as teacher and has given master classes in a.o. USA University of Hawaii, Cervo Master Classes in Italy, South-America and Asia.
She founded the Emäsalo Music Festival in 2006, taking place each summer in southern Finland On her acclaimed debut CD (issued under the Finnish label Fuga in 2008) she collaborated with pianist Oliver Kern in sonatas by Franck, Saint-Saëns and Debussy. Another CD (with guitarist Otto Tolonen) was released 2011 by Classic Concert Music Group, Salzburg as well as a live concert video (USB), Tango Intimamente with tango arrangements for violin and harp together with Floraleda Sacchi (Amadeus Arte 2019). A premiere recording with music for violin and orchestra by a.o. George de Godzinsky was released in 2021 by Naxos.