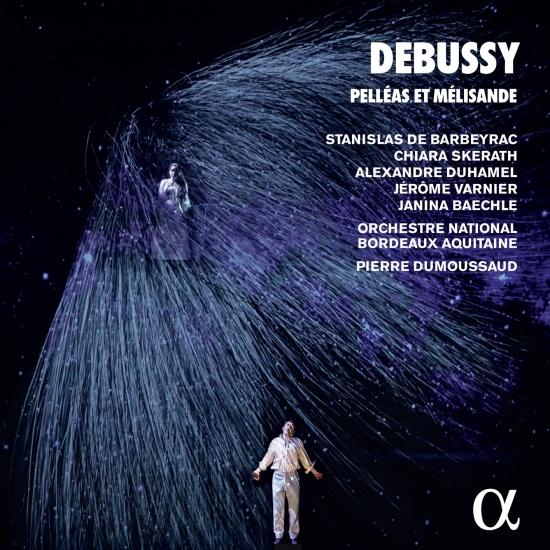 The Covid pandemic caused the cancellation of the performances of Pelléas et Mélisande at the Opéra National de Bordeaux, which approached Alpha in order to make an audio recording of this masterpiece. So here is that unexpected but highly anticipated new version, with an exceptional cast and a young conductor, Pierre Dumoussaud, whose calling card it is fast becoming, since he has already conducted it in many houses. ‘His conducting calls for nothing but praise, striking a fine balance between analytical clarity and theatrical life, while at the same time bringing out the extraordinary modernity of this intoxicating music’, wrote Christian Merlin in Le Figaro of one of his staged performances. The ‘disarming sincerity’ of Pelléas (Stanislas de Barbeyrac), the ‘constant emotion’ of Mélisande (Chiara Skerath), the ‘bitingly intense singing’ of Golaud (Alexandre Duhamel) – these are some of the comments elicited by the 2018 performances in the staging of Philippe Béziat and Florent Siaud, the intended revival of which this year was prevented by the health emergency. The album cover features a photo from that memorable production.
Stanislas de Barbeyrac, tenor
Chiara Skerath, soprano
Alexandre Duhamel, baritone
Jerome Varnier, bass
Janina Baechle, mezzo-soprano
Orchestra National Bordeaux Aquitaine
Pierre Dumoussaud, conductor 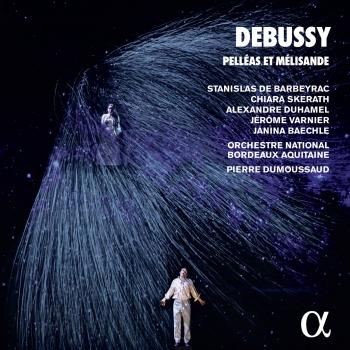 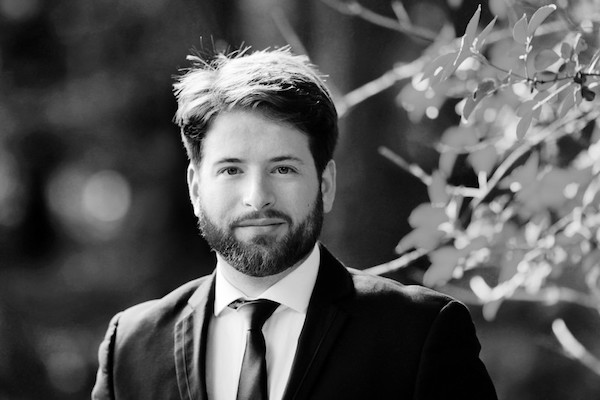 Pierre Dumoussaud
arrived on the international opera scene thanks to the award he won at Le Concours International de Chefs d’Orchestre d’Opéra organised by the Opéra Royal de Wallonie in 2017. He is now pursuing a brilliant career in the orchestra pits of Europe’s opera houses. His enthusiasm and meticulousness have won him a number of successes in France, including the Opéra de Rouen (Madame Butterfly), the Opéra de Montpellier (Fantasio) or the opera houses of Angers-Nantes and Rennes (Hamlet). He has recently premiered at the Opéra de Lausanne (La Belle Hélène), at the Bayerische Staatsoper (Mignon) and the Greek National Opera (Lucia di Lammermoor).
His future projects display his predilection for 19th and 20th century French music: apart from his awaited return to the opera houses of Montpellier (Le Voyage dans la Lune) and Rouen (Pelléas et Mélisande), Pierre Dumoussaud will appear for the first time at the Opéra Comique in 2021 with La Belle Hélène. After having recorded Pelléas et Mélisande for Alpha Classics at the Opéra National de Bordeaux, he will be soon reunited with the Palazzetto Bru Zane, an institution he already worked with in 2015, and release the first complete version of André Messager’s Les P’tites Michu (with the Orchestre National des Pays de la Loire and the company Les Brigands). Another album, devoted to the composer Olivier Greif (1950-2000), is to be released by the label B Records.
A bassoonist enthused by the symphonic repertoire, Pierre Dumoussaud trained as an orchestral conductor at the Conservatoire de Paris until 2014, when he won the first prize at the ADAMI’s “Talents Chefs d’Orchestre”. The following year, when he turned 25, he replaced at the last minute Alain Lombard for a televised concert at the head of the Orchestre National Bordeaux Aquitaine. He has kept up a special relationship with this institution, becoming its assistant conductor (from 2014 to 2016), subsequently being at the head of several operatic productions (Don Carlo, Semiramide, The Turn of the Screw, Lucia di Lammermoor) as well as ballets (Romeo and Juliet, Giselle). From then on, invitations have multiplied: Pierre Dumoussaud has conducted turn by turn the Orchestre National du Capitole de Toulouse, the Kanazawa Ensemble Orchestra, the Orchestre National d’Auvergne, the Real Filharmonía de Galicia, the Orchestre National de Lille, the Orchestre de Chambre de Lausanne, the Orchestre National de Metz, the Orchestra della Svizzera Italiana, or the Orchestre National d’Île-de-France.
Invited to conduct the orchestra of the Festival de Pâques de Deauville, he has been collaborating closely with Renaud Capuçon, Bertrand Chamayou and Nicholas Angelich.“Clear and modern but also eloquent and lively,” to quote Christian Merlin (Le Figaro), the conducting of Pierre Dumoussaud is appreciated by instrumentalists as well as by singers and dancers; the young conductor will appear for the first time at the Opéra National de Paris in May 2021, in the production “Hommage à Roland Petit”.
The Orchestre National Bordeaux Aquitaine
is successor to the Orchestra of the Saint-Cécile Society, which was founded in 1850.
In 1988, under the leadership of Artistic Director Alain Lombard, the ONBA began to attract significant acclaim for both for its symphony repertoire and its chamber music ensembles. The orchestra subsequently recorded CDs and toured on an international scale. The size of the audiences attracted from Bordeaux and throughout Aquitaine alsoincreased considerably.
In 1996, Thierry Fouquet was appointed Director of the Opéra de Bordeaux. Now a fully-fledged member of this institution, the ONBA proposes a full season of symphonic music in Bordeaux (a series of 20 major concerts, summer concerts, festivals, chamber music with"soloist ensembles" and the Ciné-Concerts festival). The ONBA is fulfilling its mission at both regional and national levels, attending major French festivals such as the Folle Journée de Nantes, La Roque-d’Antheron (...) and also performing internationally (Japan, Spain). The ONBA supports both operatic and choreographic performances, whilst increasing provision for younger audiences ; the activities developed in this respect in recent years are among the most successful in France.
The symphony orchestra is made up of 120 musicians. The numbers required for each concert vary according to the type of work performed : medium and large ensembles are needed for symphonic and operatic events, smaller ensembles for chamber music concerts.
After Kwamé Ryan (2007-2013), the English conductor Paul Daniel is recently named Musical Director for the orchestra.