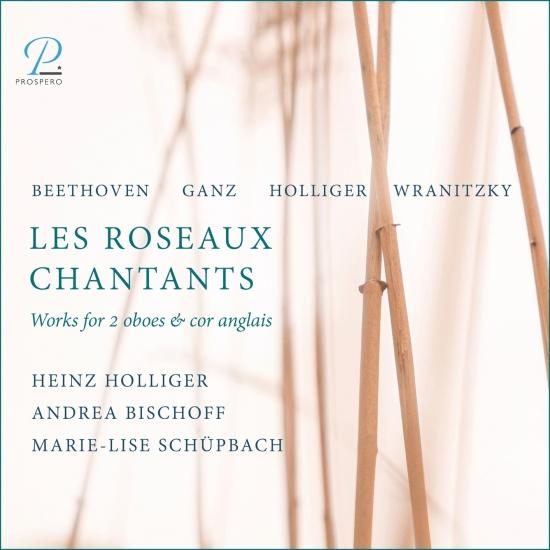 The Swiss oboist, composer and conductor Heinz Holliger is without doubt one of the "grand old men" of the European classical music scene. Now in his 83rd year, the busy all-round musician is still bursting with verve, curiosity and the desire to make music. His latest album is called "Les Roseaux Chantants" ("The Singing Reed Flutes"), an allusion to the double reed with which the notes on the oboe and the cor anglais are made to sound. Works were chosen that were composed for the unusual combination of two oboes plus English horn. A tonally attractive combination, as the works by Beethoven, Wranitzky, the Swiss composer Rudolph Ganz and, last but not least, Heinz Holliger himself, impressively demonstrate.
Quite amazing what astonishing musical colours and sound effects an ensemble of three reed instruments can achieve. To be heard on the new album with Swiss music legend Heinz Holliger. The title »Les Roseaux Chantants», the »singing reeds», refers to the double reed through which the oboe and cor anglais (and also the bassoon) are blown to set the air vibrating and produce sounds. Works by Ludwig van Beethoven, the Swiss composer Rudolph Ganz (1877-1972), Anton Wranitzky and Heinz Holliger. A fascinating sound and musical experience.
Heinz Holliger, born 1939 in Langenthal, Switzerland, pursues a worldwide career as an oboist, conductor and composer and has recorded more than 350 works, starting in 1963. His recordings as a conductor include the complete symphonies, overtures and concerti by Robert Schumann, the complete Schubert symphonies, as well as important works by Bernd Alois Zimmermann and Charles Koechlin. His latest release are works for 2 Oboes and Cor Anglais, featuring besides works by Beethoven and Wranitzky, the unknown two pieces „The little Sphinx“ and „The little Elf“ by Swiss composer Rudolph Ganz and three short pieces, that Holliger himself has composed in 2020.
Heinz Holliger, oboe
Andrea Bischoff, oboe
Marie-Lise Schüpbach, cor anglais