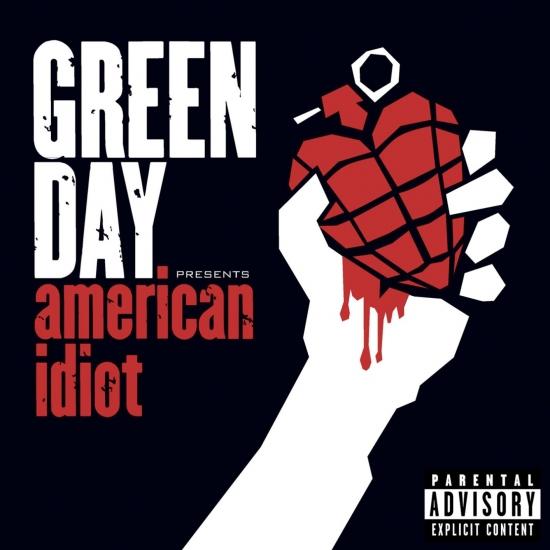 Tell the truth: did anybody think Green Day would still be around in 2004? Ten years ago, when they blew up into the hot summer band of 1994, they were snotty little Berkeley, California, punk kids who sounded ready to pogo off the face of the earth in three-chord tantrums such as 'Basket Case.' Between Billie Joe Armstrong's adenoidal snarl and Tre Cool's maniac drums, Green Day seemed like a Saturday-morning-cartoon version of The Young Ones, three cheeky monkeys who came to raid the bar and disappear. But here they are with American Idiot: a fifty-seven-minute politically charged epic depicting a character named Jesus of Suburbia as he suffers through the decline and fall of the American dream. And all this from the boys who brought you Dookie.
American Idiot is the kind of old-school rock opera that went out of style when Keith Moon still had a valid driver's license, in the tradition of the Who's Tommy, Yes' Relayer or Styx's Kilroy Was Here. Since Green Day are punk rockers, they obviously have a specific model in mind: Husker Du's 1984 Zen Arcade, which showed how a street-level hardcore band could play around with storytelling without diluting the primal anger of the music. On American Idiot, the thirteen tracks segue together, expanding into piano balladry and acoustic country shuffles. The big statement 'Jesus of Suburbia' is a nine-minute five-part suite, with Roman-numeral chapters including 'City of the Damned,' 'Dearly Beloved' and 'Tales of Another Broken Home.'
American Idiot could have been a mess; in fact, it is a mess. The plot has characters with names such as St. Jimmy and Whatsername, young rebels who end up on the 'Boulevard of Broken Dreams.' But the individual tunes are tough and punchy enough to work on their own. You can guess who the 'American Idiot' is in the bang-up title tune, as Armstrong rages against the 'subliminal mind-fuck America' of the George W. Bush era: 'Welcome to a new kind of tension/All across the alien nation.' Green Day have always swiped licks from the Clash, even back when they were still singing about high school shrinks and whores, so it makes sense for them to come on like Joe Strummer. The other Clash flashback is 'Are We the Waiting,' a grandiose ballad evoking Side Three of London Calling. 'Wake Me Up When September Ends' is an acoustic power ballad, a sadder, more adult sequel to 'Good Riddance (Time of Your Life).' Even better, there are punk ravers such as 'Give Me Novocaine,' 'Extraordinary Girl' and 'Letterbomb,' which bites off a big juicy chunk of the Cheap Trick oldie 'She's Tight.'
Since rock operas are self-conscious and pompous beasts by definition, Green Day obligingly cram all their bad ideas into one monstrously awful track, the nine-minute 'Homecoming,' which sounds like the Who's 'A Quick One While He's Away' without any of the funny parts. But aside from that, Idiot doesa fine job of revving up the basic Green Dayconceit, adding emotional flavor to top-shelf Armstrong songs. They don't skimp on basic tunefulness — not even in the other big nine-minute track, 'Jesus of Suburbia,' which packs in punk thrash, naked piano, glockenspiel, Beach Boys harmonies and a Springsteen-style production number about a 7-Eleven parking lot where there are some mystical goings-down indeed. Against all odds, Green Day have found a way to hit their thirties without either betraying their original spirit or falling on their faces. Good Charlotte, you better be taking notes. (Rob Sheffield, Rolling Stone)
Billie Joe Armstrong, guitar & vocals
Mike Dirnt, bass & vocals
Tre Cool, drums
Additional musicians:
Rob Cavallo, piano
Jason Freese, saxophone
Kathy Marshall, violin
Erin Benim, viola
Rachel Turner, cello
Carmel Dean, accordion, piano, synthesizer
Trey Files, percussion
Recorded at Ocean Way Recording, Hollywood, CA.
Capitol Studios, Hollywood, CA.
880 Studios, Oakland, CA.
Mixed at Image Recording Studios, Hollywood, CA.
Mastered at Sterling Sound, NY.
Mastered by Ted Jensen
Mixed by Chris Lord-Alge
Produced by Green Day & Rob Cavallo
Digitally remastered.
Rolling Stone 500 Greatest Albums of All Time - Rated 225/500!

In 1987 friends Billie Joe Armstrong and Mike Dirnt created a band named Sweet Children. Their first show of note took place in October of that year at Rod’s Hockey Pit in California. A year later John Kiffmeyer joined their band as a drummer and business manager, helping them create a local fan base. They were signed to Lookout! Records after the owner, Larry Livermore saw them play in one of their earlier shows. In order to avoid confusion with the band Sweet Baby, they changed their name. The band now known as Green Day was born. The name is supposedly related to their liking of marijuana.
Lookout! released their first album in 1990 named 39/Smooth. Included with the album was a letter supposedly from I.R.S. Records saying they had tried to sign Green Day. The band included a response saying they were loyal to Lookout!. Their response called I.R.S. “cheesy and washed up.” Later in 1990 Green Day released Slappy and Sweet Children. Also in 1990 John Kiffmeyer left the band to attend college. Tré Cool, the drummer from The Lookouts became Green Day’s temporary replacement. Once it was apparent that Kiffmeyer did not plan to return, Tré Cool took up the role as permanent drummer. In 1991, 1,039/Smoothed Out Slappy Hours, a compilation of 39/Smooth, Slappy and 1,000 Hours albums. For most of 1992 and 1993, the band was on tour which included shows in Europe. In 1992, their album Kerplunk sold fifty thousand copies in the United States. This was impressive for the independent punk band.
The success of Kerplunk drew interest from major record companies to Green Day. They decided to leave Lookout! records and sign with Reprise Records under the producer Rob Cavello. This move gave them the name sellouts in the eyes of many punk fans. This did not stop them as they went on to release Dookie. The album was recorded in three weeks and was an immediate success. The airtime given to “Longview,” “Basket Case,” and “When I Come Around” by MTV aided this success greatly. Every one of those songs hit number one on Modern Rock Tracks charts. That same year marked their nationwide tour accompanied by the bands Queercore and Pansy Division. Green Day played at both Lollapalooza and Woodstock 1994. The later performance jump started their publicity and recognition nationwide. In 1995, Dookie won the Grammy for Best Alternative Album.
In 1995, the single “J.A.R.” went right to the number one spot on the Modern Rock Track chart. The album Insomniac quickly followed in the fall of 1995. Insomniac was much darker than the band’s previous work. It did well, getting four of five stars from Rolling Stone Magazine. One of the songs on this album referred to the bands thought that they have gone too commercial in their music. Insomniac was not as successful as Dookie, but it still managed to sell seven million copies in the United States. It also won the band award for Favorite Artist, Favorite Rock Artist and Favorite Alternative Artist in 1996 at the American Music Awards. The video for “Walking Contradiction” was nominated for Best Video, Short Form and Best Special effects at the MTV Video Music Awards. After this, the band pulled out of a European tour, citing their exhaustion.
The band took a break in 1996 and picked up working on a new album in 1997. Right from the beginning, they agreed that the album had to be different than their previous work. The experimental album was labeled Nimrod, released in 1997. The album had a wider variety of music, punk rock, surf rock, ska and an acoustic ballad. Nimrod hit number ten on the charts due to the popularity of “Good Riddance (Time of Your Life).” This same song won an MTV Video award for Best Alternative Video. The video focused on major changes in the lives of a variety of people, overlaid by the guitar part. Other songs from Nimrod included “Nice Guys Finish Last,” “Hitchin’ a Ride,” and “Redundant.”
Warning was released in 2000, which followed the same style change as Nimrod. All Music Guide gave it a four point five out of five, saying that while not innovative, it was a satisfying endeavor. The Rolling Stone magazine was harsher in their rating of a three out of five. They cited the band’s previous hard core work and claimed that people would not want to listen to the lighter style of music from Green Day. Despite the hits, “Minority” and “Warning,” fans began to lose interest in the band because of the album Warning. Most of Green Day’s work had previously hit double platinum, Warning only warranted gold.
In 2001 at the California Music Awards Green Day was nominated for eight different awards, they won them all, those awards were Outstanding Album, Outstanding Punk Rock/Ska Album, Outstanding Group, Outstanding Male Vocalist, Outstanding Bassist, Outstanding Drummer, Outstanding Songwriter and Outstanding Artist. The release of warning was followed by their greatest hits album International Superhits! and an assemblage album called Shenanigans. These sold well, reaching platinum in the United States. Shenanigans was nominated for a Grammy for best Rock Instrumental Performance.
In the summer of 2003 the master tapes with all twenty songs for their new album tentatively called Cigarettes and Valentines was stolen from the studio. Instead of redoing the album, decided to make another, even better album. That same year, they worked with Iggy Pop on two songs on his new album Skull Ring. It was then that the band had serious talks to work out some issues they had with the other members. American idiot was the result and was released in 2004. It hit number one on the Billboard charts, marking the first time Green Day had such a rating. It was commonly called a “punk rock opera” following the “Jesus of Suburbia.” It won the Grammy in 2005 for Best Rock Album and took seven of eight awards in the 2005 MTV music awards.