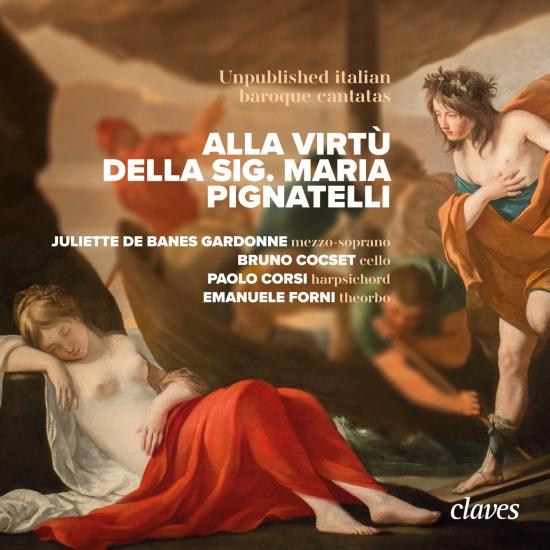 The Antoniana Library in Padua holds a manuscript called Cantate alla virtù della Signora Maria Pignatelli. A true vocal anthology of the early 18th century, this period canzoniere contains forty-eight secular cantatas, almost all unpublished, by seventeen composers from the great artistic centres that Italy had around 1700: Rome and the Papal States (Bologna, Ferrara, Ravenna), the Duchy of Milan, Naples, the Kingdom of Sicily, and Venice.
The manuscript contained (among other things) three questions that we were able to work on thanks to research funded by the HEM (University of Music) in Geneva and the IRMAS (Institut recherche Musique et Art de la Scène - Institute of Research on Music and Scenic Arts): 1) who was the dedicatee of the manuscript, 2) who could have been the author of the compilation, 3) when was the compilation made.
Originating from the ancient Kingdom of Naples, the Pignatelli family was one of the most illustrious families in Italy. It was divided into many branches, and it is on the Spanish side that our research brought new evidence as to the identity of Maria Anna Pignatelli (1689-1755)12. A native of Alcudia, Maria Anna Pignatelli is remembered for her love affair with the poet and librettist Pietro Metastasio as the second “Metastasian” Marianna. In 1709 she married Count Johann-Michael Von Althann in Barcelona and followed her husband to the Austrian court. A favourite of the Archduke Charles V, she was behind the success of Metastasia in Vienna, whom she brought in to replace Apostolo Zeno. Given this identity, the compilation cannot be dated after 1709, when Maria Anna was known as Countess of Althan, whereas the title of the manuscript only indicates the term Signora Pignatelli.
With eight cantatas, the Neapolitan Giuseppe Porsile is the most represented composer in the manuscript. Numerous biographical inaccuracies have long perpetuated a rather blurred image of this musician, of whom only one composition from his early Neapolitan period is known, the dramma per musica Il ritorno d’Ulisse alla patria (1707). Porsile was officially appointed Kapellmeister in Barcelona on January 1, 1708, and his career is troubling because it follows that of Maria Anna Pignatelli in a similar manner from Barcelona to Vienna. One of our research theories is that Porsile himself wrote this canzoniere for Maria Pignatelli, shortly before the young woman’s marriage.
With eighteen cantatas written by Neapolitan composers or composers considered as such (eight by Giuseppe Porsile, two by Francesco Mancini, five by Alessandro Scarlatti and three by Domenico Scarlatti), the manuscript seems closely linked to the city of Naples. Nine composers are associated with the city of Bologna (Benati, Albergati, Cesarini, Bononcini, Gasparini, Arresti, Pistocchi, Perti, and Monza). The first three were in the service of the Roman Cardinal Benedetto Phamphilj who, from 1690 to 1693, was Cardinal Legate there. The other six were members of the Philharmonic Academy of the city. Cesarini was to follow his patron to Rome, where he was to meet up with Alessandro Scarlatti, Gasparini and Bononcini. The latter, after passing through London, was to spend the rest of his life in Vienna. The Tuscan Orlandini travelled between Florence and the Philharmonic Academy of Bologna. Finally, Gasparini, Pollaroli and D. Scarlatti mainly worked in Venice.
For this album, we tried to preserve the identity of the manuscript, especially the Neapolitan musical predominance. We therefore featured three cantatas by G. Porsile, each of which has a musical or literary characteristic trait: the evocation of a tarantella in Ch’io t’adori oh mia Clori; an instrumental introduction “à la française” in Necessità di Fato, and a reference to the myth of Ariadne in Arianna infelice. In response to Ariadne’s suffering and to her vow of faithfulness which concludes Porsile’s cantata, we extracted the aria of a cantata by F. Mancini called Non voglio più catene, voglio la libertà (I want no more chains, I want freedom). Also by Mancini, Va sospirando il core is one of the cantatas that can be found in many collections. This multiplicity testifies to the fame of certain arias at the time. A. Scarlatti naturally appears in this Neapolitan part of the CD with the cantata Lontananza non risana recorded on a tenor viol. The final aria from the cantata Se ti lascio amato bene for cello and voice features in the manuscript under the composer’s name “Di Fiorenza”. However, this is a mistaken attribution in favour of Alessandro Scarlatti, which we were able to bring to light through our research. All these Neapolitan cantatas were recorded on a harpsichord by Augusto Bonza (1984) after Guarracino (17th-century Neapolitan harpsichord maker).
Two other cantatas in the manuscript caught our attention: Poiché più dell’amore, by the Milanese Carlo Antonio Monza, whose vocal music remains extremely poorly known. Despite his Lombardy origins, Monza’s musical output can be traced back to the cities of central and southern Italy between 1709 and 1724; and the cantata E che più far poss’io by Francesco Gasparini, one of the most important Italian opera composers of the first three decades of the 18th century. They were recorded on Paolo Corsi’s historic harpsichord built by Elpidio Gregori (central Italy) around 1760.
Juliette de Banes Gardonne, mezzo-soprano
Bruno Cocset, cello
Paolo Corsi, harpsichord
Emanuele Forni, theorbe
Alla Virtù della Sig. Maria Pignatelli