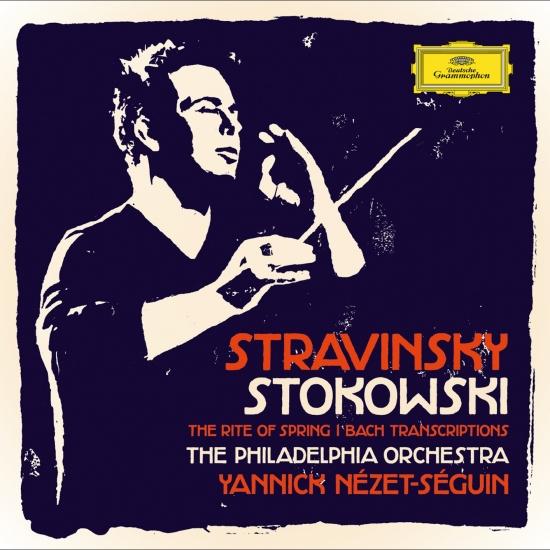 Info for Stravinsky / Stokowski - The Rite Of Spring / Bach Transcriptions

Introducing the international debut Deutsche Grammophon orchestral album from leading French-Canadian conductor Yannick Nézet-Séguin and the distinguished Philadelphia Orchestra. A powerful musical tribute to the mighty Leopold Stokowski (1882–1977), 35 years after his death, from the young conductor who now continues his legacy. Stokowski spent some of his most important and fruitful years in charge of the orchestra in Philadelphia, in a position that brought him some of his greatest accomplishments. Musical showmanship, free-thinking and a populist approach to contemporary music are characteristics of Stokowski’s distinguished conducting and recording career.
This new album focuses on Stravinsky’s daring, revolutionary and game-changing ballet score, The Rite of Spring – given its American premiere performance by Stokowski and his Philadelphia Orchestra, and a work that reaches its centenary milestone in 2013.
Plus a selection of popular Stokowski transcriptions, including the famous Toccata and Fugue in D minor (J. S. Bach), as heard in its Stokowski version in Disney’s classic Mickey Mouse movie, Fantasia.
"...its quality will put it at the top of the heap...Nézet-Séguin has a keen sense of contour, of well-judged peaks and valleys, as well as a coloristic precision that reveals the individual nature of each moment. Repeated listenings uncover new things...as much as Nézet-Séguin keeps excitement under control, he saves his most savage outburst the way one plays a trump card. The timpani eruption that ushers in "The Naming of the Chosen One" is perhaps the most emphatic on record. So great is the detail I wonder if the engineers change microphone placement for different parts of the piece. Whatever. Never in my dreams did I think such great recorded sound could be captured in Verizon Hall." (David Patrick Stearns, Philadelphia Inquirer)
The Philadelphia Orchestra
Yannick Nézet-Séguin, conductor 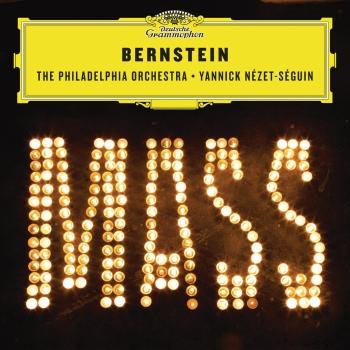 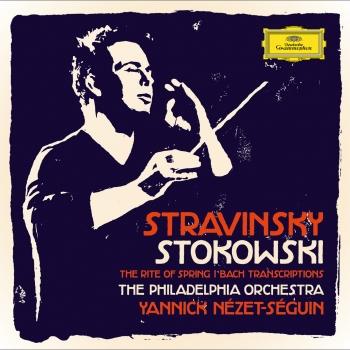 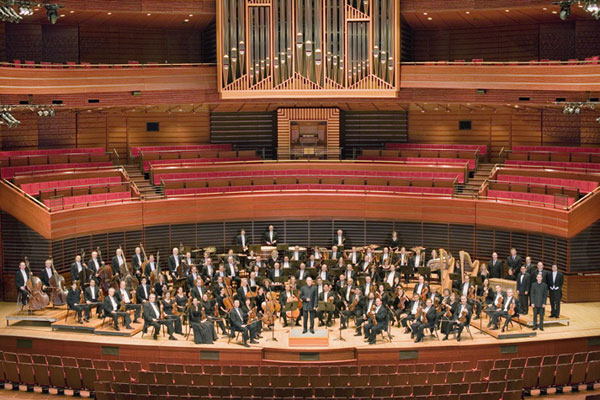 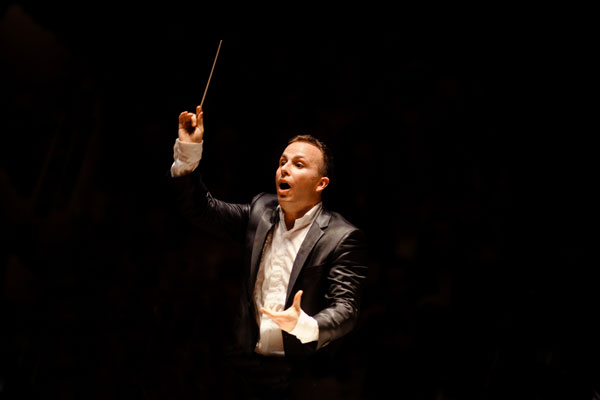 Yannick Nézet-Séguin
Music Director of The Philadelphia Orchestra since the start of the 2012/13 season and Music Director of Rotterdam Philharmonic Orchestra and Principal Guest Conductor of the London Philharmonic Orchestra since 2008, Yannick Nézet-Séguin has also been Artistic Director and Principal Conductor of the Orchestre Métropolitain (Montreal) since 2000, and has conducted all the major ensembles in his native Canada.
His European debut in 2004 swiftly led to invitations to many ensembles, such as the Dresden Staatskapelle, Berliner Philharmoniker, Bavarian Radio Symphony Orchestra, Wiener Philharmoniker (in Salzburg, Lucerne and Vienna), Accademia Nazionale di Santa Cecilia, Royal Stockholm Philharmonic and Chamber Orchestra of Europe. He made his BBC Proms debut in 2009 with the Scottish Chamber Orchestra, returning the following year with the Rotterdam Philharmonic. Summer 2012 saw concerts with the Orchestre Métropolitain in Canada; The Philadelphia Orchestra in Vail and Saratoga; and concerts at Lincoln Center’s Mostly Mozart Festival in New York with the Chamber Orchestra of Europe and Mostly Mozart Festival Orchestra.
A notable opera conductor, Mr Nézet-Séguin made his debut at the Salzburg Festival in 2008 with a new production of Roméo et Juliette, returning to the city for the 2010 Mozartwoche and for Don Giovanni at the 2010 and 2011 summer festivals. For The Metropolitan Opera, he has conducted Carmen, Don Carlo and Faust, with La Traviata opening next month and will continue to appear each season thereafter. His 2011 debut at Teatro alla Scala (Roméo et Juliette) was followed last year by his first production for Royal Opera House, Covent Garden (Rusalka) and returns in a later season. For Netherlands Opera, he has conducted The Makropoulos Case, Turandot and Don Carlo (all with the Rotterdam Philharmonic) and in 2011, embarked on a major opera series for Festspielhaus Baden-Baden.
Last October, Mr Nézet-Séguin’s inaugural concerts with The Philadelphia Orchestra were most warmly received and included his acclaimed Carnegie Hall debut (Verdi Requiem). Alongside regular subscription and touring programmes, he will lead three Carnegie Hall concerts each season and will make their first recording together for Deutsche Grammophon later this season. Other highlights of 2012/13 include two separate tours to Japan and the Far East with the Rotterdam Philharmonic; a German tour with the London Philharmonic; and the complete Schumann symphonies and concertos with the Chamber Orchestra of Europe, which he recorded live last November for Deutsche Grammophon from Cité de la Musique in Paris.
In July 2012, following highly successful DVD releases of Gounod’s Roméo et Juliette (Salzburg Festival, 2008) and Bizet’s Carmen (The Metropolitan Opera, 2010) for their Yellow Label, Deutsche Grammophon announced a major long-term collaboration. Alongside his Philadelphia Orchestra and Chamber Orchestra of Europe recordings, he makes a series of three recordings with the Rotterdam Philharmonic, starting with Tchaikovsky’s Sixth Symphony; and live recordings of Mozart’s seven mature operas from the Baden-Baden Summer Festival. The first, Don Giovanni, was recorded in 2011 with Mahler Chamber Orchestra and released last year to outstanding reviews and will be followed in 2013 by the release of Così fan tutte, recorded last summer with Chamber Orchestra of Europe. Remaining titles in the series are Idomeneo, Die Entführung aus dem Serail, Le nozze di Figaro, La clemenza di Tito and Die Zauberflöte. Mr Nézet-Séguin’s discography with the Rotterdam Philharmonic also includes recordings of Strauss (Ein Heldenleben/Vier letzte Lieder) and Berlioz (Symphonie fantastique/La Mort de Cléopâtre) for BIS Records; and three EMI/Virgin releases, including an Edison Award-winning album of Ravel’s orchestral works. With the London Philharmonic Orchestra and Choir he has recorded Brahms’s German Requiem on the LPO’s own label; he also continues to enjoy a fruitful recording relationship with Orchestre Métropolitain and Canadian label ATMA Classique.
A native of Montreal, Mr Nézet-Séguin studied piano, conducting, composition, and chamber music at the Conservatoire de musique du Québec in Montreal and choral conducting at the Westminster Choir College in Princeton, New Jersey before going on to study with renowned conductors, most notably the Italian maestro Carlo Maria Giulini. His honours include a prestigious Royal Philharmonic Society Award; Canada’s highly coveted National Arts Centre Award and the Prix Denise-Pelletier, the highest distinction for the arts in Quebec, awarded by the Quebec government. In 2011, he received an honorary doctorate from the University of Quebec in Montreal and was appointed a Companion of the Order of Canada in 2012. (By Askonas Holt)
The Philadelphia Orchestra
Founded in 1900, The Philadelphia Orchestra has distinguished itself as one of the leading orchestras in the world through over a century of acclaimed performances, historic international tours, best-selling recordings, and its unprecedented record of innovation in recording technologies and outreach. The Orchestra has maintained unity in artistic leadership with only seven music directors throughout its history: Fritz Scheel (1900–07), Carl Pohlig (1907–12), Leopold Stokowski (1912–41), Eugene Ormandy (1936–80), Riccardo Muti (1980–92), Wolfgang Sawallisch (1993–2003), and Christoph Eschenbach (2003–08).
This rich tradition is carried on by Charles Dutoit, who was appointed chief conductor and artistic adviser of The Philadelphia Orchestra from the 2008–09 season through the 2011–12 season. Mr Dutoit has a long-standing relationship with the Orchestra, having made his début with the ensemble in 1980. As chief conductor and artistic adviser, he will lead the Orchestra in Philadelphia as well as at Carnegie Hall and on tour. He will continue his role as artistic director and principal conductor of the Orchestra’s annual three-week residency at the Saratoga Performing Arts Center and will lead concerts when the Orchestra is in residence at the Bravo! Vail Valley Music Festival.

Booklet for Stravinsky / Stokowski - The Rite Of Spring / Bach Transcriptions