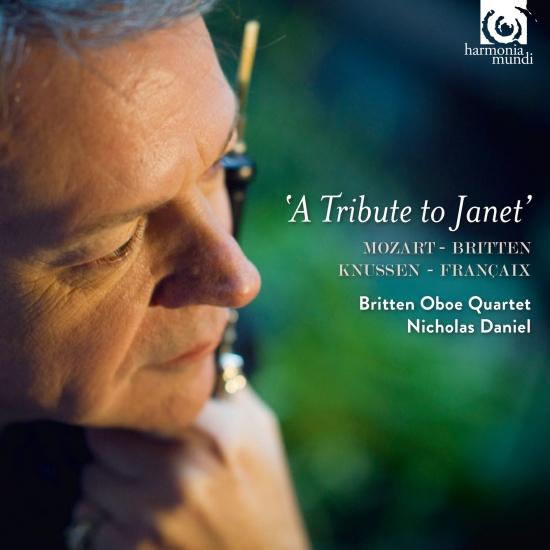 Info for Mozart, Britten, Knussen & Françaix: A Tribute to Janet

The Britten Oboe Quartet here makes its recording debut with a programme of its core repertory. It naturally includes the great Mozart Quartet K.370 and Britten’s own Phantasy op.2, but also two pieces that have a special resonance for the distinguished oboist Nicholas Daniel, because they were commissioned and premiered by Janet Craxton (1929-81), his ‘beloved teacher’ and inspiration, and her London Oboe Quartet. Thus Oliver Knussen’s Cantata (1977) and the delightful Cor Anglais Quartet of Jean Françaix add further variety to a fascinating anthology that also features Nicholas Daniel’s own completion of Mozart’s elegiac fragment K580a.
Nicholas Daniel, oboe
Britten Oboe Quartet 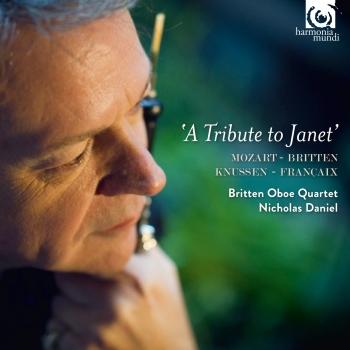 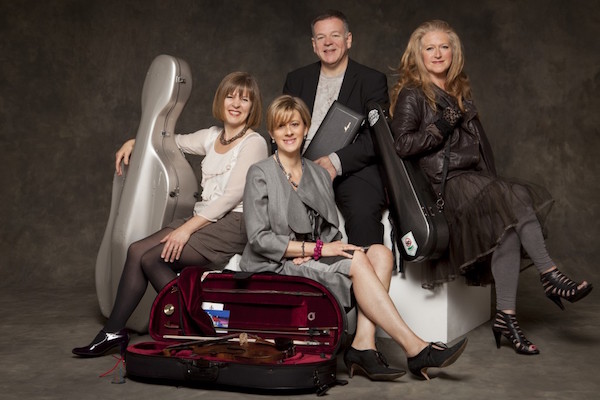 Nicholas Daniel
long and distinguished career began when, at the age of 18, he won the BBC Young Musician of the Year Competition. As one of the UK’s most distinguished soloists, he has become an important ambassador for music in many different fields. In recognition of this, he was awarded the prestigious Queen’s Medal for Music.
Nicholas has been a concerto soloist with many of the world’s leading orchestras, working under conductors such as Edward Gardner, Sakari Oramo, Roger Norrington, Jiri Belohlavek, Mark Wigglesworth, James MacMillan and Mark Elder. In addition to his experience in Baroque music, he has premiered works by composers including Harrison Birtwistle, Henri Dutilleux, Thea Musgrave, John Tavener, James MacMillan and Michael Tippett. His recording of oboe concertos by Vaughan Williams and MacMillan was awarded the BBC Music Magazine Premiere Award in 2016.
He is oboist with Britten Sinfonia and Artistic Director of the Leicester International Festival. He teaches in the UK and in Germany, where is he Professor of Oboe at the Musikhochschule, Trossingen
He made his conducting debut at the 2004 BBC Proms with Britten Sinfonia. He has conducted many projects with the orchestra over 20 years, including many new works, and recently conducted orchestras in Finland and Norway.
An active chamber musician, Nicholas is a founder member of the Haffner Wind Ensemble and the Britten Oboe Quartet, whose debut disc will be released on the Harmonia Mundi label in 2017. He also regularly works with the pianists Charles Owen and Julius Drake, and with the Carducci and Vogler String Quartets.
Britten Oboe Quartet
Nicholas Daniel founded the Britten Oboe Quartet together with his colleagues and co-principals of the award-winning Britten Sinfonia; they all bring to this ensemble not only the highest musical standards but also the experience of playing together over many years, resulting in warm, expressive and above all enjoyable playing. Their aim is to bring music of the highest quality to audiences and to explore lesser-known repertoire, both British and from abroad, as well as playing standard classics such as the Mozart oboe quartet.
Their repertoire includes oboe and cor anglais quartets by Britten, Berkeley, Knussen, Elgar, Krommer, Francaix, Gordon Jacob and Elisabeth Lutyens. Their imaginative programming embraces repertoire other than the oboe quartet, often including string trios, solo works such as Britten’s Metamorphoses after Ovid or other chamber music combinations.
They relish the challenge of programming a well-balanced and attractive concert in line with specific themes and can be sure to find something new and interesting for every concert.
The quartet has been heard up and down the UK, from Aberdeen to the Gregynog Festival in Wales, Swaledale and Wimbledon Festivals, Oxford, Brighton, and Wigmore Hall and Kings Place in London. Their most recent UK tours have included the RNCM in Manchester, Sheffield and Keele Universities and Djanogly Hall in Nottingham.

Booklet for Mozart, Britten, Knussen & Françaix: A Tribute to Janet